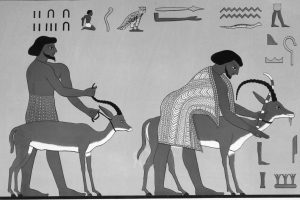 Peasants in Ancient Egypt comprised almost 80 percent of the Egyptian population. They belonged to the lowest level of the social pyramid of ancient Egypt, yet the society depended on their hard work and contribution to the nation.

Continuing reading to find out more about the peasants of ancient Egypt.

What Did Peasants Do in Ancient Egypt?

Peasants spent most of their lives working. They were the workers in the fields producing crops, unskilled laborers, construction workers, and servants in the homes of wealthy aristocrats, who even grew crops to provide food for everyone. The peasants were also the ones who helped build monuments and pyramids for the pharaoh.

The months of June to September comprised the flood season, when the Nile River overran its bank, flooded the fields, and fertilized the grounds. During this time, the farmers had to wait for the waters to go down before they could plant the grounds. It was also the time when they were able to help build pyramids, temples, and monuments.

In the Agricultural Sect

The planting season happened every month of October, which is when they planted seeds of mostly barley and wheat, to make bread. Usually, the farmers worked in pairs to plant the fields: one softened the grounds by using a plow pulled by cattle, and the other scattered the seeds while following behind.

The month of March was when the harvesting season began; the farmers worked together with the rest of their family members. The men chopped down the plants with a sickle—a curved metal blade with a wood handle. Meanwhile, the women and children collected the tall stalks of grains. They used to sing songs to make the time pass quickly during long hours of labor.

The Peasants’ Way of Life

Ancient Egypt peasants resided in the country with very limited amenities and privileges. While the pharaoh and the upper classes consumed tons of sumptuous food, peasants relied on a simple diet.

Their typical food included homemade bread, fish, onions, cucumbers, peas, and lentils. At times of famine, they were even demanded to eat papyrus—a material from plants used as writing surfaces during ancient times. These peasants stayed in plain mud-brick houses that they built for themselves.

They were forced to work hard, not to forget that they did have some time for fun. Men delighted themselves playing a river game, in which they knocked one another off papyrus rafts. They honored the Egyptian gods by taking part in festivals.

Noting that they also celebrated holidays before the planting season and after the harvest season. As a reward for their hard work, they were allowed to collect the remaining grains and feed their families. 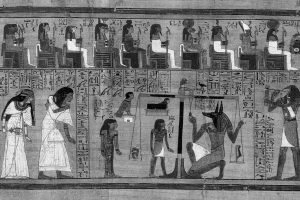 The ancient Egyptian civilization was structured similarly to a pyramid. The highest class in the social pyramid was their leader, also known as the pharaoh. He was believed to be a god in human form and was associated with divinity. They honored their gods, such as Ra, Isis, and Osiris, because they believed that their gods had control over the universe and could make the Nile River overflow, cause famine, and even bring death.

Wealthy Egyptians lavished on grand dinner parties served with sumptuous meals, such as roasted duck, quail, pigeon, goose, goat, antelope, and sheep. They feasted on special delicacies, including grapes, dates, figs, and coconuts, together with different kinds of cakes, bread, and honey.

Both men and women dressed in fine linen clothing and wore perfumes and pieces of jewelry. Women painted their nails, wore makeup, and used lipstick.

Priests were also highly respected and powerful because they influenced every person through religion. Women were also allowed to become priests; they were fairly treated, similar to male priests.

They administered religious rituals and important ceremonies, especially death and burial, performed healings, gave advice, and oversaw temples. The highest-ranked priests served under the pharaoh, while others were scattered throughout the temples in Egypt.

The government officials came from noble and wealthy families and were often members of the pharaoh’s family or other upper-class families who enjoyed a luxurious and excellent quality of life. Some of them inherited positions from their family members. There were three important government officials: the vizier, the chief treasurer, and the general of the armies.

The vizier was the one who implemented orders from the pharaoh, as well as advised and assisted him or her in royal duties. He was also appointed to supervise other government officials and served as a chief judge. A vizier was often seen wearing white—the color of neutrality—as he was expected to always be fair and neutral, showing no special favor to either side in a conflict.

The chief treasurer was the one who was in charge of the government’s wealth. His responsibility was to gather taxes. People paid their taxes using cloth, silver, grain, and animals, such as cows and cattle, given that ancient Egypt’s economy was based on goods instead of money.

Aside from the pharaoh, the top military commander was the general of the armies. His main duty was to advise the pharaoh when it comes to alliances with other kingdoms, war, and national security matters, including how to protect and fortify the borders.

Scribes were in the next layer of the social pyramid; they were well-paid and held an admired position in society. However, only men were allowed to be scribes.

Their duty was to record information for religious leaders and government officials, such as keep track of the accounts of the food and grain supply, monitor the results of the government census, calculate and collect taxes, oversee court cases, record the number of soldiers and their food supply, and determine the number of enemies that had been killed in a war. This profession took them several years of schooling, and students were said to be treated harshly.

The next social class was called the artisans, which comprised a group of craftspeople who specialized in different crafts. They were carpenters, painters, weavers, stone carvers, leather workers, potters, jewelers, sculptors, and metal workers. Most of the artisans were men. Meanwhile, some women artisans chose crafts that required much easier work, such as weaving fabric and making beaded clothing, jewelry, and perfume.

Artisans created various exquisite pieces all throughout Egypt. Stone carvers were considered the most skilled artisans. They made highly complicated engravings, statues, and reliefs that could be found in every Egyptian tomb, monument, and temple, which also, later on, served as historical evidence of ancient Egyptian life.

Stone carvers played a significant role in the tomb building of Egyptian people, especially for the wealthy. The wealthy ordered highly detailed tombs for themselves because they believed in an afterlife.

Stone carvers created pieces that would preserve and honor the dead at the same time. These included intricate wall engravings, statues of the dead, and stone coffins, which could be overly demanding and time-consuming.

Plenty of artisans were called on to toil on the royal projects of pharaohs. They commonly worked in large groups or in big workshops and labored for 10 days before taking a day off. They depended totally on their employers for food as they belonged to the lower-middle class in the social pyramid.

They were highly skilled people with a low social standing. Despite their skills and creativity, the upper class considered them as common laborers. Some of them earned recognition, but others were not even permitted to mark their work.

The largest population also belonged to the lowest class in the social pyramid. They were the peasants and the Egyptian servants. They lived with the fewest comforts, and they did not have many privileges with regard to fairness and equality.

Ancient Egyptians believed that their social classes provided order in their civilization. Each social class had duties and jobs they needed to fulfill to help society in general. There was a slim chance that one would be able to move to a higher class because the social pyramid was inflexible.

All of them gave importance to their family life; they got married within their social group, and their children belonged to the same social group as their parents. Men and women had various responsibilities within their families. Men, as the head of the households, worked to support the family and educate their sons to be engaged in their chosen fields. Women were usually in charge of the house and took care of the children.

– Life of the Women:

Women in upper-class society had servants to help them in their households, whereas lower-class women accomplished all the work by themselves. Some women from the middle to upper class took jobs as priestesses, doctors, or government officials.

Egyptian women had an advantage over most of the women in ancient times. They enjoyed more rights and freedom; they were allowed to ask for a divorce, represent themselves legally, possess the land, and even run their own business.

All of them took delight in a better quality of life depending on the social class they belonged to.

Just like peasants, servants in ancient Egypt belonged to the bottom of the social class. They did all the backbreaking work depending on the needs of their master. Both men and women worked as servants but had different duties.

Male servants sometimes worked in the fields and other jobs that required physical strength. Women servants most commonly helped girls from royalty or worked as nannies of children from wealthy households.

Some of them were appointed to serve the pharaoh. They worked as butlers, cooks, dressers, and litter carriers. They also served in construction projects, such as building monuments, temples, and steles, as some were sent to battles as part of the Egyptian army.

They were considered unskilled workers in ancient Egypt and did not have plenty of rights. They could not own land nor move up in the social pyramid, but their children could. Their children were identified as peasants and would have the right to own land. Only those servants who were prisoners of war had no rights at all, given that they were considered slaves.

Egyptian pyramids were usually depicted as being constructed by slaves, but there is not much factual evidence on this. The evidence found suggests that farmers or peasants labored to erect the pyramids and other colossal construction projects during the flood season of the Nile River. 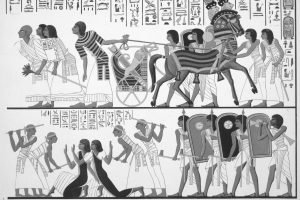 Let’s look at what we covered in the article:

Social inequality may be a normal event happening in every community, and Egypt is one of them.