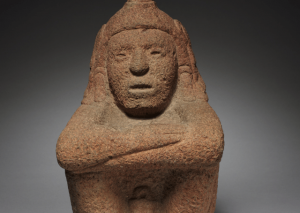 Chalchiuhtlicue, the Aztec goddess of rivers and oceans, captures the imagination of readers. She was highly revered in Aztec lore and culture during the Spanish conquest.

Let our experts show you what this goddess of water can do.

Who is Chalchiuhtlicue in Aztec Mythology?

Chalchiuhtlicue is the mythological Aztec Goddess of Water. She is the deity of water that collects on the earth: oceans, rivers, and lakes. She is also the patron saint of newborns and harvest time, but she has both a life-giving side and a life-ending side.

According to some records, she is the wife or sister of Tlaloc, the god of rain, and they often worked and wielded power together.

Chalchiuhtlicue: How the Aztec Water God Came About

The Aztecs flourished in Central Mexico between the years 1300-1521. Their culture was rich and varied, and there is much left behind to tell us their story. Because it is mythology, the records vary between the different sources. Some say that Chalchiuhtlicue and Tlaloc were “born” at the same time. There is some familial connection between them. Whether they are siblings or husband and wife is unclear.

Tezcatlipoca, Xipe Tote, Quetzalcoatl, and Huitzilopochtli were the four gods already in existence. They worked together to form the two water deities in Aztec Mythology.

This was the first time they all worked together as they created the world. We can infer that the four united because the water gods were essential to survival for the Aztecs.

The Myth of the Deity of Water

There were many attempts to create the world in the Aztec belief system. The gods created the world five times, so there were five suns. A different god was in charge of each of the suns, and Chalchiuhtlicue was in charge of the fourth Sun. During her reign as the water goddess of the fourth sun, water on the earth was plentiful. So were the fish and other creatures that lived in the seas and lakes.

But disaster came. After 676 years of ruling over the fourth sun or world, she destroyed it. According to some sources, the god of the first sun, Tezcatlipoca, was jealous. He was envious of the love she showed to the people in her world. So, he accused her of being insincere in her love.

The myth states that because of her pain, Chalchiuhtlicue cried until her tears filled the earth. Some records say she cried blood, but others say it was only water. She cried for 52 years until the whole world drowned. The humans that had been there turned into fish to survive.

The heavens collapsed, and the fourth world ended. Some narratives state that Chalchiuhtlicue gave some humans a chance. She built a bridge from earth to Heaven, and those who were righteous could have the opportunity to get to Heaven. Those left behind turned to fish, and the world ended.

The fifth sun began after the flood, which is considered to be our current world.

Chalchiuhtlicue is depicted in various ways throughout different sources. But there is a thread of commonality running through it all. The Aztec water goddess was in charge of all the water on the earth. The Aztecs made sacrifices to her to bring the water to take care of their crops. Stories say that she resided in the mountains. 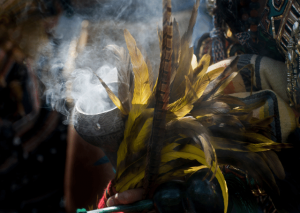 In Aztec mythology, all rivers stem from the mountains. Chalchiuhtlicue would live there and send water down to the people to give the people life and wash them clean. She was so connected to harvest and crop prosperity. Chalchiuhtlicue is often portrayed with Xilonen, the Goddess of Maize.

The Aztecs first began to grow and eat maize under her time as the fourth sun god. We know now maize as a staple of the Aztec and even modern Mexican diet.

Chalchiuhtlicue was both feared and revered. The people were grateful for the gift of water, which promoted crop growth. But she was also feared and given credit for storms and deaths by water and poor navigation. She was also often connected with the dangerous snake goddess Chicomecoatl. If the water goddess felt displeased, she would use her power to bring destruction to the people. Thus, the sacrifices continued to keep her pleased.

The Deity of Water’s Appearance: How She is Depicted

Her name means “She of the Jade Skirt.” In many depictions of the goddess, she is wearing a blue-green skirt out from which flows water. In many records, one might see a male child and a female child floating in it in the water. That is why she is the patron of newborns and births.

Midwives would call upon her during the difficult process of childbirth. They would ask for both blessing and protection. In some images, she wears a blue and white headdress. Some sources state that the headdress contains serpents. Others say that the headdress has cotton strips and amaranth stems.

Chalchiuhtlicue was often seen sitting on a red stool. Through her skirt or from behind her skirt flows the water. Sometimes she wears a yellow headdress instead of blue and white. Besides the children in the water, there are also sometimes other figures.

Some pictures show her as having black lines on her face and a jade nose plug. Many old texts contain descriptions of her appearance and activities. For example, the Pre-Columbian Codex Borgia includes painted plates of her image. Other codices display her in different ways. For statues or sculptures, she was often carved from greenstone, hence the name.

Worship and Sacrifice: Deifying the Goddess of the Water?

The Aztecs worshipped Chalchiuhtlicue through many rites and rituals. Her festival month is in February, which is considered the sixth month in the Aztec calendar. All Aztec deities involved with water and fertility are given month-long celebrations.

Appropriately enough, it took place during the rainy season. The Aztecs were hopeful for good rain for the crops to grow. Mountain tops were considered good places for these sacrifices. But other sacrifices took place at Lake Texcoco, where whirlpools were common. Sacrifices to Chalchiuhtlicue often involved humans, especially children. Children’s tears were considered good omens for plentiful rain that year. And yet, she is still considered the patron of newborns, childbirth, and fertility.

They would be sacrificed right before the rainy season was about to begin. A young boy would be offered at the mountain top, and a young girl would be drowned at the lake. Priests might also sacrifice themselves to the water goddess. Items were ritually dropped into bodies of water.

There was fasting, feasting, and other human sacrifices. They would also sacrifice war captives and adult men and women. Often, when there was a human sacrifice ritual, the victims would be in a costume representing Chalchiuhtlicue.

In some sources, priests would dive into lakes and imitate the sound and movements of frogs.

Many ancient texts describe the Aztec water god. And in the mid-19th century, a massive statue thought to be the water goddess was unearthed. Archaeologists discovered it under The Pyramid of the Sun in Teotihuacán. This was the city that was formerly the place of power in Aztec society.

A codex is an ancient text. Anyone could write it, and it was pages stitched together. A few codices which describe and depict Chalchiuhtlicue:

Her appearance and often negative acts make Chalchiuhtlicue look quite fearsome. However, she is the goddess of the life-giving substance of water. Her job was an important one: to keep the Aztec people in health and bounty.

Imagine a life where one must sacrifice humans to keep one of the most important gods pleased? They had no choice. The alternative was far worse: starvation, thirst, and the potential death of a civilization.

Next time you visit a body of water, whether ocean, lake, or river, think of Chalchiuhtlicue. Think also of the power of water. It can give life, but it also has the terrible power to kill and destroy. For Chalchiuhtlicue, she held the fate of the world in her hands.