Coatlicue: Aztec Mother of the Gods 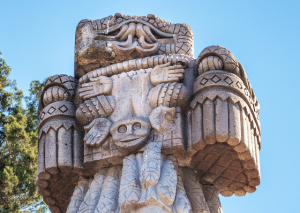 Coatlicue, or literally translated, “Snakes-Her-Skirt”, was the Aztec mother of the gods. She had over 400 children, one of them being the famous god of warfare, Huitzilopochtli.

She is remembered for birthing the moon and the stars, and she was also the patron of midwives and women who die in childbirth.

In this article bio, you’ll learn all about the mother of the gods and how she may have predicted the end of the Aztec Empire.

Who is Coatlicue in Aztec Mythology?

Coatlicue, pronounced “koh-at-lee-kway”, was foremost, in Aztec mythology, a mother. She bore hundreds of children, and her final child was the most famous of all. Her other children were a woman, Coyolxauhqui, and 400 others, named the Centzonhuitznahua, or the southern stars. These were all male gods.

Coatlicue was there at the beginning of time. So the Aztecs revered her for bringing life to the world. Some myths also link this Aztec goddess of earth with Ometeotl, the god of duality. She is sometimes considered the female part of this god, or she was his wife and bore his children. It is unclear.

Coatlicue also went by other names. These names represent the other facets of her. She was also named Toci, “Our Grandmother”, Cihuacoatl, “Snake Woman”, or the skirt goddess. These seem like opposing aspects. It is vague whether the Aztecs feared Coatlicue or loved her completely.

Coatlicue and Her Beginnings or Rather, Her Endings?

The Coatlicue myth is linked to that of her famous son, Huitzilopochtli. The most popular story found in the Florentine Codex states that she was a priestess. This codex could be called the Coatlicue Codex. One day, she was sweeping the temple on top of Coatepec (Snake Mountain). A feather or a ball of feathers landed on her skirt. This symbolized her impregnation or virgin conception. Think of the similarity to the story of Mary in the Christian narrative.

However, her other children found out about this impregnation. Coatlicue’s daughter, Coyolxauhqui, was especially angry. She called upon her brothers to help her kill her mother on top of Snake Mountain.

But one of the sons warned his mother, and so Coatlicue was prepared for this attack, but she was afraid. Coyolxauhqui arrived with her brothers to fight. But that’s where the story gets a little confusing. It’s unclear whether Coatlicue died. For in both stories, Huitzilopochtli came to her defense.

Either way, Coyolxauhqui and her brothers were defeated by Huitzilopochtli. He sliced off his sister’s head and dropped her body down to the base of the mountain. The other brothers or the Centzonhuitznahua were also defeated. Huitzilopochtli was also linked to the sun. So this story could represent the sun’s conquering of the moon and the stars each day.

In another story, the Aztec god Coatlicue willingly sacrificed herself as gods and goddesses often did. She wanted to bring about the new creation of the world. The Aztecs believed there were five creations. Each time, the gods had to sacrifice themselves to bring it about. Because of a date written on one of Coatlicue’s remaining statues, historians wonder if that was why she died.

Interestingly enough, in Aztec mythology, it was believed that dead soldiers became hummingbirds. The use of feathers in Coatlicue’s tale could hint that a random soldier impregnated her. Perhaps that was what had angered her daughter enough for her to wish to kill her own mother. Whether Coatlicue remained alive or not is unclear, but she does play a role later in the Aztec’s story. 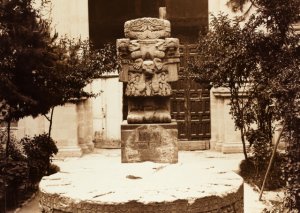 But blood was a life-giving and sacred fluid. Thus the snakes could represent her wrongful death or willing sacrifice. This famous statue of Coatlicue now resides in Mexico City’s National Museum of Anthropology. It was created around 1500 AD, and it is around 257 cm high. This statue has no head, representing her most famous myth. Her chest is exposed, and she wears a skull belt as well as a skirt of serpents.

Represented as an old woman, the goddess has significant breasts and stomach rolls. These are a sign of motherhood and fertility. This statue was buried when found by the Spanish conquerors of the Aztecs. It was seen as a pagan idol, while Spain was fiercely Christian at the time. It was “unearthed” once more in 1790.

Other representations of her indicate other stories of Coatlicue. Unfortunately, there are not as many stories about her as there were about other gods and goddesses. And not many works of art portray her. However, in the same museum, there is another statue, this one on a smaller scale. In this statue, Coatlicue is still wearing a snake skirt, but she has her head. However, the head is a skeleton, making her look even more fearsome.

This could indicate what other myths state. That Coatlicue was a part of the tzitzimime, these minor deities linked to the stars. However, in uncertain times, these creatures could come to the earth and destroy it. With them, they brought fear and pain. They are like demons. But, they were also linked to fertility, like Coatlicue, and they were also called upon.

Rites and Rituals: When was Coatlicue Worshipped?

Coatlicue was worshipped in both the spring and the fall. She was celebrated during the spring rituals during the month of Tozozontli. She was also celebrated in Quecholli, during the hunting festival. At this time, there was an effigy made of the goddess, and that effigy was sacrificed.

There doesn’t seem to be much mention of other human sacrifices to Coatlicue. This could be because of her links to fertility and life.

Coatlicue’s supposed death and the battle were represented in the Templo Mayor. This temple housed shrines to both Tlaloc and Coatlicue’s son. But the pyramid also had a snake sculpture on top. The shadows from the sculpture covered the steps. At the base of the steps is a stone with a carving of Coatlicue’s dismembered daughter.

Did the Aztec Mother Goddess Predict the Fall of the Aztec Empire?

Many myths state that Coatlicue met her end for various reasons. But it appears that she was still there at the end of it all. During the reign of Moctezuma I, in the mid-1400s, he sent magicians to the mythical ancestral city of Aztlan. They were there to bring gifts to Coatlicue to gain knowledge.

However, there were so many gifts. Even those 60 magicians could not bear to carry them up the steep mountain. One of Coatlicue’s priests met them and agreed to help lead them to her. In some stories, he was able to carry the gifts up with ease. But in other stories, the gifts fell one by one down the mountain.

Either way, when they reached Coatlicue at the top of the mountain, she was crying. She had been longing for her dear son ever since the battle in which he had conquered her other children. She was disappointed that the magicians could not bring her the gifts on their own. She found them weak, stating that they had grown too heavy with food and wine. Their cities would fall one by one, and only then could Huitzilopochtli return to her side once more.

Soon after her prediction, the Spanish conquistadors arrived in Central Mexico. They defeated the Aztecs, bringing their time of power to an end.

To sum up the main points of Coatlicue’s bio article:

Coatlicue, the Aztec mother goddess’, tale was a sad one. She had a son but lost her other children in battle. She might have died or willingly sacrificed herself so that the world could go on. Like many of the other gods and goddesses in the Aztec pantheon, Coatlicue is a mixture of both good and evil.

She is the representation of motherhood and fertility. She is also connected to snakes, blood, and death, especially in childbirth. She could have been one of the tzitzimime, or Aztec demons, which wrought havoc upon the world every so often.

However, if one takes a good look at her story, she also simply appears as a lonely mother who misses her child. She wished for his swift return, and she hoped and predicted for the Aztec empire to fall so that he could return to her. Despite her sad end and sad tale, the goddess had power, indeed.