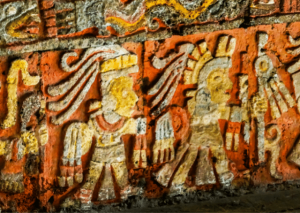 Huitzilopochtli was the famous Aztec warrior god or god of war. He was also the god of the sun, human sacrifice, and the patron or founder of Tenochtitlan. Huitzilopochtli was central to the Aztec pantheon and important to their creation.

But this article will describe how Huitzilopochtli was also connected to their end.

Who is Huitzilopochtli in Aztec Mythology?

Huitzilopochtli is the Aztec god of war and the Aztec patron god. In various codices and sculptures and images, this god is adorned with the articles of war. In his hand, he carries Xiuhcoatl, the fire serpent. He is one of the most important gods to the Mexica people (or the Aztecs), and he is fierce in action and aspect.

However, hummingbirds were considered reincarnated dead warriors. And so his name could actually mean “reincarnated warrior from the south.” Either way, Huitzilopochtli’s power was linked to the battlefield. For the Aztecs, Huitzilopochtli was their primary god of war. He was worshipped before battles and after. He was also credited with both victory and defeat. Huitzilopochtli’s sacrifices would help to strengthen the abilities and power of the armies.

The Aztec god Huitzilopochtli was powerful and fierce. Even so, the Aztecs believed he could still be defeated. All gods might eventually meet their end at some point against a stronger force. But they feared that if Huitzilopochtli was defeated, that would be the end of the Aztec people and the fifth world.

Huitzilopochtli’s Mythology: Stories of the God of War

Huitzilopochtli has an interesting tale to tell. His origins are murky, as many of the Aztec gods in their pantheon. One of the stories says that he was born of Coatlicue. She was a priestess, sweeping the temple one day on Coatepec, Snake Mountain. She either saw a hummingbird feather fall or she touched a ball of feathers. Either way, through supposedly virginal conception, she became pregnant with Huitzilopochtli.

Coatlicue, however, had 400 other children already. Most of them were male and made up the southern stars. This group was called the Centzonuitznaua. She also had one daughter named Coyolxauhqi. Coatlicue’s other children heard about their mother’s strange pregnancy. They were furious! Coyolxauhqi led her brothers to the mountain to punish their mother by killing her. Since hummingbirds were reincarnated warriors, Coatlicue might have been impregnated by a warrior.

Anyway, the myth goes that Coyolxauhqi and her brothers arrived at the mountain. Coatlicue trembled in fear, but from inside her womb, Huitzilopochtli comforted his mother. Just when they were about to strike, Huitzilopochtli jumped from the womb. He was fully dressed in his battle gear.

It’s unclear whether Coatlicue was killed or not. Statues of her are often headless as that was what her daughter and sons did to her. But they met their end. Once Huitzilopochtli emerged, he attacked his siblings. He decapitated his sister and threw her body over the side of the mountain. He sent his other siblings running and they fled, scattering themselves into the sky.

This is why Huitzilopochtli is connected to the sun as well. His sister was the moon, and his brothers the stars. He was the sun, chasing them across the sky each day, sending the moon back under the earth. Huitzilopochtli needed strength and sustenance to make this daily journey. That’s the reason for his connection to blood and human sacrifice.

In the myth, it states that Huitzilopochtli was strangely born without flesh. He had only bones. While his family waited before the beginning of the world, he waited without skin for 600 years. After that, he and his brothers started their work, and somewhere along the way, he was given his skin.

They defeated the female crocodile-like monster first and tore her into pieces. Her pieces created either the directions or the heavens and the earth. Then they began the first sun or the first world. Two of his brothers were in charge of two of the suns. But each world was eventually destroyed until they reached the fifth one. That is the world we inhabit now, and Tezcatlipoca rules it.

The Aztecs believed that the start of the fifth world coincided with the start of their empire. They called themselves the “People of the Sun”. They believed that the sun needed constant nourishment to keep continuing. If they did not “feed” him, then the world would end. This fear was especially high every 52 years. That was how long the sacrifices would last to keep the sun full.

Human Sacrifice: How the Aztecs Worshipped the Famous Aztec Warrior 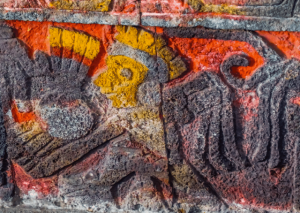 It took many sacrifices to appease the Aztec god of war. He was celebrated during the month of Panquetzaliztli and the festival of Toxcatl. He was also worshipped during battle times as well as every 52 years when the sun needed to be refueled.

To the Aztec people, blood was nourishment for the gods. Multiple gods were sacrificed to in order to keep them satiated and appeased. During Toxcatl, captives and slaves were sacrificed in the name of Huitzilopochtli.

During certain sacrifices, the rituals mimicked what happened to Huitzilopochtli’s sister atop Coatepec. They were female sacrificial victims and they were decapitated just like Coyolxauhqi. Being the Aztec patron god, Huitzilopochtli shared Templo Mayor in Tenochtitlan.

The Temple of Huitzilopochtli

The temple of Huitzilopochtli faced the south while Tlaloc, the rain god’s temple faced the north. It makes sense that the rain god and the god related to the sun would share a temple. They are both necessary for survival for human life. Their powers were equal, and so they shared the powerful seat of the temple.

Within his temple, there were shrines for human and other sacrifices. Huitzilopochtli’s shrine was painted red, representing battle and blood. At the base of the temple is a stone with the image of the decapitated moon goddess, Coyolxauhqi. The ritual sacrifice of young women most likely took place there. Or at least that’s where their skulls were placed.

The placement of the stone, as well as the ritual, represents Huitzilopochtli’s constant fight against the moon and the stars. Every day, he defeats them. Each day for this god is a battle for power, and so he must continually be refreshed and renewed.

According to legend, some would join Huitziliopochtli in the afterlife. Warriors who fell in battle and women who died in childbirth would serve him. Both, after a time of service, would transform and reincarnate into hummingbirds.

The myth goes that Huitzilopochtli was the founder of Tenochtitlan. Like Moses, this god led his people from their ancestral home in Aztlan to Tenochtitlan. According to the Aubin Codex, Huitzilopochtli instructed the Aztecs to leave their home. He also didn’t want them to call themselves Aztec. In Aztlan, they had been ruled by a people called Azteca Chicomoztoca.

He wanted them to instead call themselves Mexica. As they journeyed to a new home, Huitzilopochtli left them under the care of one of his sisters. Her name was Malinalxochitl. She was the goddess of snakes, scorpions, and desert insects.

She founded a city, yet, the people didn’t like her. They wanted Huitzilopochtli to come back. He put his sister to sleep and bid the Aztecs to keep moving onward. Malinalxochitl woke up, and she was furious that her brother had told the people to leave. She wanted revenge. She gave birth to a son, whose name was Copil. She told him that when he grew up, he must go and slay his uncle Huitzilopochtli.

Copil did just that. Once he grew up, he confronted his uncle and tried to kill him to avenge his mother. But the famous Aztec warrior was far too strong. He killed his nephew by tearing out his heart. He threw it into Lake Texcoco. He told the Aztecs that they should find Copil’s heart and that was where they should build Tenochtitlan.

They would know where the heart was once they saw a sign. It would be an eagle standing on a cactus, eating a snake. That is why Tenochtitlan is built in a valley on an island in Lake Texcoco. It is also a reason why the Aztecs called him the eagle god. This image of an eagle eating a serpent is even on Mexico’s flag today.

Artwork and the Aztec Eagle God

Huitzilopochtli looked different depending on the Codex he was featured in. He is sometimes shown as part-hummingbird with feathers on his left side. He might also have a black face. He carries a shield as well as the fire serpent as his weapon as well as a spear. Usually, his body is painted blue. He wore a blue-green hummingbird helmet. He is also sometimes shown with an eagle.

In his temple, Huitzilopochtli’s statue was decorated but also hidden behind a curtain. That way, it was made much holier and more sacred. There is a story that the statue was destroyed by a Spanish soldier but later salvaged. Unfortunately, we don’t know the truth. But some believe the statue still exists, hidden away in a cave.

However, there aren’t many depictions of this god. His statues were often carved of wood, and so they didn’t stand the test of time.

Huitzilopochtli and the End of the Aztecs

Huitzilopochtli had been the guide of the sun, the god of war, and the leader to Tenochtitlan for the Aztecs. But the Aztecs feared that with the end of Huitzilopochtli would come to the end of themselves. They weren’t wrong. There were some signs that the end was near.

During the reign of the Moctezuma I, one of Huitzilopochtli’s temples was consumed by fire. According to sources, the fire was huge and uncontrollable. They attempted to put it out, but their attempts only made it worse.

This fire was seen as a bad omen, a sign of bad things to come in their future. The Aztecs weren’t wrong. For it was only in Moctezuma II’s reign that the Spanish conquistadors came to take over the Aztec people. They crushed them into nonexistence.

Also, the Spanish’s first attack happened on Toxcatl, Huitzilopochtli’s festival day. It seemed that Huitzilopochtli, the god of war, had finally met his match. The rest is history.

Check out the list of main topics of Huitzilopochtli:

Even though Huitzilopochtli was the god of human sacrifice, one can tell that he cared for his people. He controlled the sun each day, chasing away the moon and the stars at the end of each night. He also was part of the beginning of the world, helping to bring about the first humans and the fifth world.

He led his people away from living life under rule in Aztlan to freedom and prosperity in Tenochtitlan. There they made their sacred and beautiful city. That was why he held such importance in the Aztec pantheon. The Aztec people wanted to please him, providing sacrifices often throughout the year to keep their world going.

Blood was the only way to feed Huitzilopochtli and keep him strong and well-nourished. He did his duty for years. But as all stories go, this one had to end as well. With Huitzilopochtli’s end came the end of a proud and strong people. The battle cannot always be won.