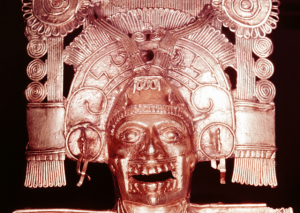 Mictlantecuhtli is the Aztec god of death in Aztec mythology. Along with his wife Mictecacihuatl, he ruled Mictlan, the Aztec underworld.

He is also called Lord of the Land of the Dead and is associated with spiders, owls, bats, and the north or south direction.

This article will detail Mictlantecuhtli’s story as well as just how vindictive he could be.

Who is Mictlantecuhtli in Aztec Mythology?

Mictlantecuhtli is similar to Hades or Lucifer as the lord of the land of the dead. He would watch over the souls that would come to Mictlan. He and his wife ruled together, and they lived in a windowless house. Together they would share power over their land. They were not judges of those who came to be with them, but they would create and maintain order in the underworld.

The first four gods created Mictecacihuatl and Mictlantecuhtli at the same time. These gods were Xipe Totec, Quetzalcoatl, Tezcatlipoca, and Huitzilopochtli. These were the gods that were responsible for building creation. After their “father”, the god of duality, Ometeotl created them, they began to build. After creating the sun, humans, maize, and more, they created the god and goddess of the underworld.

Mictlantecuhtli is not the only god associated with the underworld or with death. But he is the most prominent figure. This Aztec death god was worshipped all over Mesoamerica. He has his equivalent in the Mayan death god Yum Cimil. He was written into myths and legends very early on. Due to his links with death and the Aztec afterlife, Mictlantecuhtli was a very feared god.

The Aztecs believed that the universe was split into three parts. There was the Ilhuicac, the heavens, Tlalticpac, the earth, and Mictlan, the underworld. In Mictlan, there were nine levels that the deceased needed to travel through. They would also need to perform specific acts or trials along the way to be able to make it to the end of the Mictlan nine levels.

The Aztecs thought that the journey took four years until the dead would reach the lowest level: Mictlan Opochcalocan. That is why the dead were given grave goods to sustain the dead on their lengthy journey. The lowest layer was where dead souls would find rest, become extinct, or keep suffering. Some legends state that the Aztecs didn’t exactly believe that there was a place reserved only for those who were good. Each person would share the same destiny, no matter what kind of life they led.

However, they did differentiate on different types of death. Their afterlife path was affected by how they died. There were normal deaths such as disease and old age. Heroic deaths were sacrifice, childbirth, or deaths by nature. There were also non-heroic deaths. The Aztecs believed that if you died a heroic death, you didn’t go to Mictlan. You would reside in Tlalocan. This was the paradise ruled over by the god, Tlaloc.

But there is varying information on that. Those who died in battle might have followed Huitzilopochtli, the god of war. Those who died in childbirth might have followed Coatlicue, but it’s unclear. The Aztec Underworld is not unlike Hades and his underworld or Satan and Hell. Mictlantecuhtli, Hades, and Satan/Lucifer would watch over the souls that came to them. They did not judge them as God is meant to do in the Christian narrative.

The Aztec Death God: The Mythology of Mictlantecuhtli 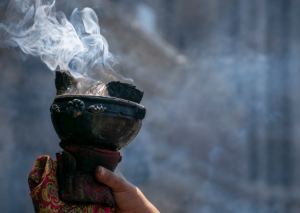 According to myth, Mictlantecuhtli was quite focused on order in his domain. He didn’t appreciate other gods attempting to interfere. This leads him to a connection to Quetzalcoatl, one of the most important creation gods.

The Aztecs believed in multiple creations of the world. After the fourth world or sun was destroyed by water, Quetzalcoatl wanted to recreate mankind. The heavens had entirely collapsed and everything was gone. The gods needed a way to create life once more. So they decided to find bones and use them to build new humans.

Quetzalcoatl decided to travel to Mictlan to find them. Some myths state that Quetzalcoatl went alone. Others state that he went along with his brother Tezcatlipoca. Either way, gods entered the underworld, and Mictlantecuhtli wasn’t happy about it.

The Deal and the Trick

Quetzalcoatl agreed, however, the conch did not sound because there were no holes in it. He needed a solution. Without Mictlantecuhtli knowing, Quetzalcoatl found worms to bore holes inside of the shell. He also filled the shell with bees. That way, their humming could sound like a trumpet as he wandered around Mictlan.

His trick worked. Quetzalcoatl fell and dropped all the bones. They broke into pieces. But Quetzalcoatl eventually escaped, taking the broken bones with him. He brought the bones to Coatlicue, and one of the gods poured their own blood into the bones to create life. According to Aztec legend, the story of the broken bones is the reason that humans are born all different sizes.

You can imagine that Mictlantecuhtli’s representations are fearsome. Most often he is shown as a skeletal figure with a skull-like head. However, even though he is only a skull, he still has eyeballs. These are large and wide so that he can see through the dark gloom of Mictlan.

Sometimes, his bones are covered in red dots, representing blood spatter. He sometimes wears owl feathers or a necklace of eyeballs. He might also have curly black hair and wear a cone-like hat. He also wore earplugs. He was believed to be six feet tall, and he was often portrayed wearing sandals. These were a sign that he was of a high rank, for he was lord of the dead.

Mictlantecuhtli was mostly celebrated during the month of Tititl. At the temple of Tlaxicoco, a god impersonator was sacrificed. Mictlantecuhtli was closely associated with ritual cannabilism. They also burned incense to honor him during this month.

He was also celebrated during Hueymiccaylhuitl, an Aztec holiday. It was the Great Feast of the Dead. This celebration was to honor those recently dead. It also helped prepare them for their long journey to the underworld. Dead people’s remains were burned, and then after that, their journey to their afterlife began. This holiday was a chance for souls of those already long dead to visit those living once more. This sort of holiday is seen in other religions as well.

Once it was known that Cortes had landed to conquer the Aztecs, Moctezuma II thought that it was the end of the world. He thought that Quetzalcoatl had returned to destroy the world. So, he ordered that even more sacrifices be given to Mictlantecuhtli to keep their souls from suffering in the afterlife.

Here are the main and most important points about Mictlantecuhtli, Aztec god of death:

The Aztec pantheon is no different from so many other religions where there is a god of death. This god rules over deceased souls. What is interesting, though, is that people’s afterlife was not affected by their good deeds. But the circumstances of their death affected their afterlife path.

The sacrifices could provide them a smooth path to Mictlan and appease Mictlantecuhtli. And those who were sacrificed would be sent to a paradise, saved from the dark gloom of Mictlan.

Interestingly, despite his fearsome look and connection with death, Mictlantecuhtli was known to enjoy control and order. He wanted everything to run smoothly as people passed from life into death into his domain. Perhaps that was a comforting thought for the Aztecs. They knew their afterlife would be one of honor and order, depending on their death.