Mixcoatl: Aztec God of the Hunt 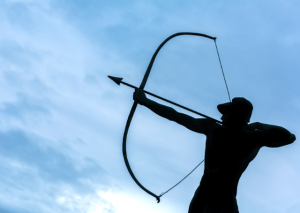 Mixcoatl was the god of the hunt often associated with the Milky Way and other celestial bodies.

He was part of Mesoamerican cultures and was popular among the Chichimecs, and acted as the central deity of Huejotzingo and Tlaxcala worship.

This article looks into the myth and legend of this Mesoamerican god. It shows his origin, his role in hunting, and the various rendition of his story.

Who is Mixcoatl in Aztec Mythology?

Mixcoatl is the Aztec god of the hunt in Aztec mythology. His name translates to “Cloud Serpent” from Nahuatl. He is known for inventing fire and connected with both the Milky Way and the stars. While he is part of the Aztec pantheon and plays a role, he is better known as a god or patron of Tlaxcalan People.

This god of hunters has a somewhat confusing tale to tell. Myths intermix and accounts change over time. There are many different versions of Mixcoatl’s story and the roles he played in the Aztec religion.

The Hunting Deity: Worship and Rituals

Because he was the god of hunting, the rituals and worship celebrations involved animals and hunting. The Aztec hunter was worshipped and celebrated in the Quecholli, the 14th month of the Aztec calendar. Quecholli is a type of bird, which is very appropriate for the lord of the hunt.

There would be feasting and hunting on top of Mt. Zacatepetl or in Mixcoatl’s temple. The hunters would dress as Mixcoatl is represented in artwork. After catching animals in a hunt, a fire was built in Mixcoatl’s name to cook the fresh meat. The children of the villages would dance with the Mixcoatl priestesses. Human sacrifices were also performed to appease the hunting deity.

Both a young man and a young woman were sacrificed to the god. Interestingly, the woman was killed similarly to an animal slaying. The priest would strike the head against a rock until she lost consciousness. The priest would cut the throat and decapitate the head.

Before the man was sacrificed, he would hold up the woman’s head to be viewed by the people. Then, he was ritually killed by heart removal.

Mixcoatl was also celebrated in the Toxcatl. This month means ‘drought,’ and it’s the 5th month in the Aztec calendar. In these celebrations, there would be both real animal hunts and staged hunts. During staged hunts, some of the hunters would dress as deers. In this month, there were more human sacrifices. The victims would impersonate other gods and represent the sacrifice of these gods.

Mixcoatl: His Story or Stories

The story of the Aztec god Mixcoatl depends on the myth and the tradition. Since this god appears in other Mesoamerican cultures, the accounts differ greatly. It can be challenging to figure out which legend was the main story. Some state that Mixcoatl is the son of the Aztec god of duality, Ometeotl. Ometeotl had four sons. Xipe Totec, Quetzalcoatl, Tezcatlipoca, and Huitzilopochtli. According to some traditions, Mixcoatl and Xipe Totec are interchangeable gods.

However, a confusing aspect of Mixcoatl’s story is his son. He is often stated to be the father of Quetzalcoatl. This god is one of the most well-known and powerful gods in the Aztec pantheon. But if Mixcoatl is Ometeotl’s son, then Quetzalcoatl would be his brother. Other myths say that he was the son of the earth goddess Itzpapalotl “Obsidian Butterfly.” He also eventually took Coatlicue, “She of the Serpent Skirt,” for his wife.

One variation of the tradition states that Tezcatlipoca turned into Mixcoatl. Tezcatlipoca is another one of Ometeotl’s sons, was also the inventor of the bow drill. That was an instrument used to create fire.

This tool was invented by swirling the stars around with an ax. Because of this, Mixcoatl became the god of the stars, the Milky Way, and fire. Another story states that the Milky Way came into being after the fourth creation of the world. That world ended when Chalchiuhtlicue destroyed it with her tears. Tezcatlipoca and Quetzalcoatl had to recreate the world and put the heavens back up. The tears had made the sky collapse.

Tezcatlipoca created the Milky Way to add to the heavens. It was this galaxy that turned into Mixcoatl. So either Mixcoatl is the Milky Way or the reincarnated version of one of his brothers.

There is another story of the hunting deity’s creation. The story goes that two hunters, Mimich and Xihuhnel, wandered into the woods searching for a two-headed deer. However, on their journey, they came across two women. Xiuhnel made love to one of them, but she murdered him just after.

To save his life, Mimich rushed away, but the other woman, named Itzpapalotl, chased him. But the gods were watching after this hunter and set a cactus to fall on the beautiful woman.

Mimich set her body on fire using the power of the Fire Lords. Once flames completely consumed her, four flints emerged, left behind from her body. He took one of the flints, which was said to contain Itzpapalotl’s soul. Once he took it in his hand, he then became Mixcoatl, the mythological hunter.

The Artist’s View: Representation in Art 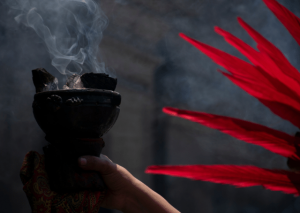 Since Mixcoatl is the lord of the hunt or the Aztec god of hunting, he is often depicted with hunting implements. He would carry a spear or a bow and arrow as well as a basket to carry his kill. Some representations show him with an eagle feather headdress. He is also fighting a rattlesnake. He often wears a black mask and is covered in red and white stripes.

Some depictions show him with yellow skin and a cloak. Yellow skin was often a representation of the human skin of a victim of human sacrifice.

Aztec God of Hunting in Other Cultures

Mixcoatl was a part of the Aztec gods, yet he wasn’t one of their most important ones. He was far more critical to the Tlaxcalan people. These people were the Chichimecs. According to mythology, Mixcoatl is the one that led them to their city-state Tlaxcala.

Some traditions state that Mixcoatl was the only god of the Chichimecs. In contrast, others said he was one among their many gods. He was the most important and their central deity. It is in this culture that believes Mixcoatl was one of the four sons of Ometeotl, the god of duality.

Tlaxcala was a city-state in Central Mexico. When the first Spanish conquerors came to the area, they resisted. But eventually, they sided with the Spanish side against the Aztecs.

Also, the inspiration for Mixcoatl could have come from a real, mortal man who was part of the Toltec people. The Toltec Civilization flourished before the Aztecs. There is a tale of their chieftain, who was named Mixcoatl.

The story goes that he impregnated his wife with an arrow. She then gave birth to a boy named Topiltzin, who later took on the title of Quetzalcoatl. Mixcoatl was also worshipped by the Otomi people and in the city of Huejotzingo.

Mixcoatl was a powerful, fearsome god. He was strong, displayed in his ability as lord of the hunt. He also controlled the stars and the heavens, bringing fire down to earth. Creating fire and hunting were essential skills of survival for the Aztecs. So it’s understandable that this god was honored in two different months in the Aztec calendar.

Not many gods can boast of being in multiple different cultures’ traditions. He was the central deity in one culture and then a god in various other Central Mexico cultures. That also means there are so many myths and stories that involve him.

He has multiple creation stories, and the stories vary about who he was related to as well. Was he born of the all-seeing god of duality? Or was he created by the earth goddess? Did he have Quetzalcoatl as a son with Coatlicue? Or was Quetzalcoatl his brother? Maybe Mixcoatl was merely Tezcatlipoca transformed?

There are so many questions, so many different variations of Mixcoatl’s story. But in a way, that exemplifies his power. He has been able to live over and over again in the multiple narratives that surround his name. And in that way, he could be construed as the most powerful god of all.