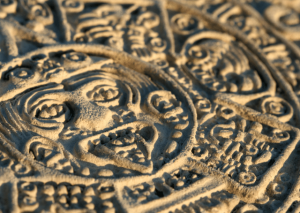 Ometeotl, unlike more general western mythological concepts of deities, gods, and goddesses, possess both sexes and encompasses the notion of duality.

In this article, our experts discuss the Aztec mythical god of duality. Read on below to understand more.

Who is Ometeotl in Aztec Mythology?

Ometeotl is the Aztec god of duality. They are the composition of two gods, both male and female. Ometecuhtli (‘two-lord’) is the male counterpart, and Omecihuatl (‘two-lady’) is the female. These are called the Aztec duality gods. Ometeotl’s name means two gods. The word ‘Ōme’ means ‘two’ or ‘dual’ and ‘teōtl,’ which means ‘god’ in Nahuatl.

Ōmeteōtl is considered the very first god according to Aztec lore, and time before him never existed. He was the force that spurred the first worlds to begin.

The Beginning of Everything: Ometeotl’s Origin Story

Like other creation stories, everything started with a void—there was nothing. Yet, there was one being who would change everything.

Different from other gods in the Aztec Pantheon, Ometeotl created themselves. Besides the meaning of two gods or dual gods, Ometeotl’s name means other things. In other translations, it also means “Lord of Our Sustenance” or “Lord of Our Existence.”

They were there since the beginning of time, and they were the start of all life on earth. From them, the world sprung. However, there is some debate about this concept. It may be too similar to the Christian God and a western understanding of religion.

The god of duality is composed of a “husband” and “wife” pairing. They were thought to reside in the 13th or highest heaven. From there, they “fathered” four of the main gods in Aztec mythology. That was most likely the most crucial thing they achieved.

Their four sons were:

Strangely, Huitzilopochtli was born without any flesh. He was a skeleton god, so the brothers waited a long time for his flesh to grow. The earth sat in waiting for a long time, and 2,028 years passed before creation began.

Once they were ready, these four gods created the world, building its various aspects. Records state that Ometeotl took no part in the process. Their job was already done. It was time for their sons to be the fuel behind everything now.

There were five attempts to create the world or five different Suns. Two of Ometeotl’s sons took turns being the Suns in two of the creations. Both Tezcatlipoca and Quetzalcoatl were lords of the world. They each ruled for a certain period until those Suns fell. Tezcatlipoca was the god of the first Sun, and Quetzalcoatl the second. Both Suns or worlds fell, which led to the third, fourth, and fifth and final Sun. That is the world we know today.

This final Sun needed nourishment through human sacrifice. These rituals would protect the Aztecs from evil manifested in the Tzitzimimeh. In the Codex Ramirez, it states that the god of duality created these beings. They were the guardians of the skies (stars). But they were attacking the Sun, attempting to bring ruin once again to the world.

The human sacrifices would appease these beings so that the Sun would remain alight and would never be destroyed. Why Ometeotl is credited for the creation of these beings is unclear as well. It is also confusing why they would have created these evil beings at all. Perhaps that is the connection back to that god’s duality.

Ometeotl was both for creating the world, happy to regenerate and cause life, and against it simultaneously. They would consider working against its creation. Maybe that is the reason for the number of attempts at building the world.

Ometeotl would rule from on high from their place in the 13th heaven or Omeyocan (place of duality). They were considered separate from the human race. So there were no temples erected in their honor. Nor were their rites and rituals done in their name.

However, they were included in prayers and thought of as the “supreme being.” Their presence wasn’t so evident in tangible ways and sacrifices, but Ometeotl was felt throughout all things.

Ometeotl and the Concept of Aztec Duality

Duality is the combination of opposing aspects, and this concept is nothing new. Cultures and religions worldwide address this concept. It is also apparent in our everyday life – that the world is full of opposites: night and day, light and dark, life and death, good and evil, yin and yang. These opposites fit together to create a ‘whole.’

Ometeotl is the manifestation of Aztec duality, and it showcases their power. They are strong, omniscient, and omnipresent because they encapsulate all opposite. There is both good and evil within them.

The Image of a God: How Ometeotl Depicted in Artwork

There wasn’t as much art depicting Ometeotl as other gods in the Aztec pantheon. However, the art credited to this god shows a male-female combination. Sometimes the god is shown wearing a skirt and a loincloth, which a man would wear.

Other times, Ometeotl is depicted in the birthing position. This position could signify they were both the mother and the father of the universe. In other images, Ometeotl is wearing headdresses and carrying items in their hand.

Did the Aztec God Actually Exist? 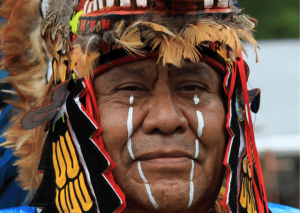 There is no mention of Ometeotl in primary sources. Some argue that someone created the name later, but records showed a belief in an overall supreme being or force. The male-female god duo images found in sources were assumed to be this being.

Ometeotl also wasn’t directly worshipped like other gods and goddesses were. So, there isn’t much artwork to show their depiction. That could imply that Ometeotl didn’t exist. It could also suggest what the Aztecs meant by their belief in this god.

The Aztec people saw this god of duality as perhaps more of an abstract being or force. They were an ambiguous concept as opposed to something “physical.” Ometeotl was at the beginning when the universe was a mere void. Then with their power, they helped to create everything to set the world in motion.

There was no need to create temples in Ometeotl’s names or perform sacrifices. They were simply a force, a power, and a spirit. The sons they fathered were the gods who would go and do real, evident, physical work.

On the other hand, some critics wonder if it is simply modern historians who have created this being. They have built up their story by pulling bits and pieces of information together. And it would make someone with a Western perspective better understand Aztec mythology. The records and analysis of this Aztec god are more in line with a Judeo-Christian understanding of “God.”

Also, this confusion about the god’s existence could merely be a translation error. While most sources state that the name means “dual gods” or “two gods,” some state otherwise. Instead of ‘ome,’ the translation could be for the word ‘omi,’ which means ‘bone.’

That would make Ometeotl’s name translate to “Bone Lord.” A particular historian, in particular, claims this to be true. That instead of a god of duality, Ometeotl was a god who resurrected and created life using bone. Therefore, that is how this god created the world.

The Debate: Was the God of Duality Who We Think He Was?

There is some debate about the understanding and belief of this god. Since they were not mentioned in primary sources by the name, it can be confusing to know whether they were a dual god. They could have been or multiple gods instead, doing the same things that Ometeotl did.

In Christianity, the concept of a dual god is obvious. One can see it in The Holy Trinity. One god in three personas. Historians could have created their interpretation out of what they understand from their own culture. They could have made a dual god according to their understanding.

Other critics claim that Ometeotl was not a dual god but rather a single god in charge of creation. We will perhaps never learn the truth about what the Aztecs truly believed. We can infer that they believed in the world’s creation and a force behind it all.

Whether Ometeotl was a combination of two gods, encompassing all the universe’s opposites, doesn’t matter. But it would be nice to one day solve the mystery. If only we could travel back in time and find out the truth.

Connections to Other Religions

If the understanding of Ometeotl is correct, then many cultures consider there to be an overall, supreme God. Think Christianity’s God, Islam’s Allah, and in a case closer to home for the Aztecs, Itzamná.

This god was the creator of the world in Mayan mythology. He encapsulated the opposites in the universe, just like the Aztec god of duality.

Ometeotl was the first god in Aztec mythology. Without them and the bearing of their sons, the world would not have been created. What’s interesting is that the research doesn’t exactly show what kind of god Ometeotl was.

For example, Chalchiuhtlicue, the Aztec Goddess of Water, could be good and evil. The people would have to sacrifice to her to keep bad things from happening. However, Ometeotl seems more like a neutral being, not uncaring, but more indifferent.

Ometeotl is the combination of all things, and so they contain all things such as both good and evil. They can be anything and everything. Temples weren’t erected to worship the god of duality. So it seems that the Aztecs were also neutral about this neutral god.

For us humans, it’s difficult to wrap our brains around such an ambiguous concept as a dual spiritual being. How can one mystical god be everything at once? Good/bad, light/dark, life/death, mother/father?

But even if it is a strange concept, we can look in our own lives to better understand this. The world is full of opposing forces: night and day, sun and moon, happiness and sadness. Even within ourselves, we can find this duality.

According to the Aztecs, Ometeotl is the life force threading its way through everything on earth. Maybe instead of one being, the concept of Ometeotl could be in all of us. That way, the spirit of Ometeotl lives on, but who knows how long the fifth Sun will last.