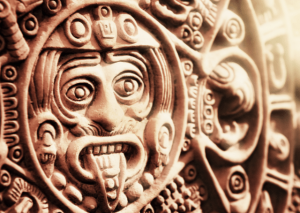 Tonatiuh is the Sun God in Aztec mythology. He is a fearsome and warlike god, and the Aztecs sacrificed human hearts to keep him happy. The sacrifices offered to him also kept the Sun moving each day, which helped the world keep going.

Read on below to know more about powerful god.

Who Is Tonatiuh In Aztec Mythology?

In Aztec mythology, Tonatiuh is the Aztec Sun god. He is fearsome and warlike, representing and inciting violence. He also represents warmth, life, and fertility because of the life-giving power of the Sun.

To keep Tonatiuh satisfied, heart sacrifices were made so that the Sun would make its journey across the sky. The name Tonaituh translates into two parts. ‘Tona’ means giving off heat or shimmer, and ‘yauh’ means to go. These words both work for the god’s name as well as to describe the sun.

Similar to the other gods in Aztec mythology, the other gods created Tonatiuh. It is written that he was made because of the sacrifice of his father, the god Nanahuatzin. Once he was created, Tonatiuh was put in charge of the sun. His name could translate to “He Who Goes Forth Shining” or “He Who Makes the Day.” Tonatiuh Aztec Sun god is also called the “Turquoise Lord.”

Some myths say that there was a time when the world was completely enveloped in darkness. The Sun existed, but it refused to move. Therefore, the people made heart sacrifices to the sun god to make the sun begin its journey across the sky.

According to mythology, these sacrifices initiated day and night as well as the pattern of seasons. Therefore, sacrificing hearts to the Aztec god, Tonatiuh continued. Some records state that the sacrifices were made daily in the temple. Priests would collect victims and offer their hearts to keep Tonatiuh pleased. That way, he would keep moving across the sky, creating day and night.

What Is He Remembered By?

Tonatiuh was connected to the Sun and the power of that celestial being. Still, he was also the patron of warriors. The warriors that would capture prisoners to use for sacrifices were called “men of the Sun.” Their efforts to collect the victims were their way of paying homage to the Sun god.

The Aztec Calendar Stone and the Sun Stone memorializes Tonatiuh. This object is a thick disk, weighing around 25 tons. This stone portrays the five creations of the world with Tonatiuh at its center. It is thought to have been created around 1427 CE and was unearthed at Tenochtitlan.

Tonatiuh’s tongue, as carved in the stone, is most likely a flint or a knife. This image represents the sacrifices made in his name. The stone might have been used as a table to sacrifice the victims to nourish Tonatiuh. But historians are unsure. This artifact is now on display in Mexico City at the National Museum of Anthropology.

Tonatiuh is often depicted as red. He is also often shown wearing an eagle headdress or having eagle feathers nearby. Tonatiuh holds a sun disk as well. He has dangling earrings, sometimes a blond wig, and a nose bar. Often, he is shown holding a human heart in his claws or talons.

His appearance is always fierce and warlike. Because of his ability to move, he is associated with an eagle. He is sometimes also called “Ascending and Descending Eagle.”

Sacrifices to the Aztec God of the Sun 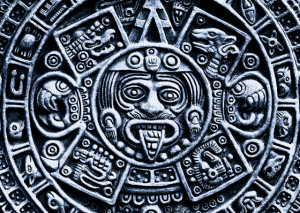 Because of the old myth, the Aztecs believed that they needed to sacrifice victims to keep Tonatiuh appeased. If they did not, the Sun would cease to move, and the earth would return to the darkness which had once reigned over it. Victims would be taken to the temple and laid out on a table or perhaps the Sun Stone.

Their hearts would be cut from their bodies and held up towards the heavens to show the sun god the gift. Victims were usually selected from war prisoners or people from other tribes or clans. The removal of the hearts as a sacrifice was called “Huey Teocalli.”

To collect more hearts to be sacrificed, the Aztec warriors would go in search of victims. They would engage in staged warfare called “flowery war.” They would fight a nearby group, and there would be no death in the war, but prisoners were taken and often done. The priests wanted to have a continuous supply of sacrificial victims.

The Aztec Sun God and a Conquistador

There was a conquistador that the Aztecs nicknamed Tonatiuh. This Spanish warrior was called Pedro de Alvarado, who donned a red beard that reminded the Aztecs of Tonatiuh. Some records mentioned that the nickname was attributed to the man’s fierceness and violence.

Even though Tonatiuh was a god in Aztec mythology, the Aztecs didn’t believe that he was immortal. They knew that he would meet his end someday.

However, that end doesn’t bode well for us. Since Tonatiuh is the god of the fifth Sun, that means that when he meets his end, so shall we. According to the Sun Stone, the fifth Sun will end because of an earthquake.

The Sun is essential to life. During the time of the Aztecs, they depended on the Sun to keep their crops growing. Therefore, it makes sense that the Aztec Sun god could wield so much power. His power was evidenced in the fear and respect the Aztecs had for him. They would perform human sacrifices to keep him appeased.

War prisoners were sought after and captured while their hearts were ripped out in a ritual ceremony. Sacrifices were completed in the temples. The victims were most likely sacrificed on the Aztec Sun Stone. Priests would hold the hearts of their victims up to the sky, showing the Sun god what they had done. The bodies were left to roll down the temple steps. Warriors or “men of the Sun” would be sent to find more victims for sacrifices.

As if often the case, life was taken to provide more life for the Aztec people. Because of his violent nature, Tonatiuh was the patron of warriors. However, because of his relation to the Sun, Tonatiuh was also the god of warmth, growth, and fertility. Gods in Aztec mythology were often a mix of attributes. They contained both good and bad, yin and yang, but to receive the good aspects of the god’s nature, sacrifices had to be made.

The other four creations of the world in Aztec mythology ended after 676 years. But Tonatiuh’s reign continues. We are in the fifth world, and Tonatiuh is the leader. The Aztec god of the Sun is in charge of the fifth sun or the current world. However, in his representation of the famous Sun Stone and various records, the fifth Sun will end one day. And both the god and the world will meet their end because of an earthquake.

If only the Sun Stone could tell us all when the end of the world was to begin. It is a question that all cultures and religions wonder about. We guess, and we make conjectures, but we still don’t know the answer. For the time being, the power of the Sun should be respected and feared. The Sun gives us life, and yet it has control over the world.

Without it, we would be lost in darkness. And according to the stories, we would still have been lost in darkness if not for the Aztecs. They started their first sacrifices, spurring the journey of the Sun across the sky. So, even though Tonatiuh is depicted as fierce and warlike, he could also be considered the god of light and all the goodness that goes with it.