Xipe Totec is “the flayed one” in Aztec mythology, and his name actually translates to Our Lord the Flayed One. 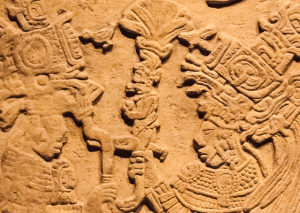 He is also the god of agriculture, fertility, new seasons, and goldsmiths, and he required human sacrifices to be appeased. He is called the flayed one because of his artistic representations, he is often shown wearing the flayed skin of sacrificial victims.

This bio of Xipe Totec will share all the gruesome details of Xipe’s history and how his people worshipped him through fear and sacrifice.

Who is Xipe Totec in Aztec Mythology?

Xipe Totec or Xipe-Totec, is one of the main creator gods. In Aztec mythology, he was born of the god of duality, Ometeotl.

His brothers are Tezcatlipoca, Huitzilopochtli, and Quetzalcoatl. Together, they fought against Cipactli, the monster destroying the world. After, they worked to begin the creation of the first world. In some myths, he was in charge of one of the suns or creations of the world before it was destroyed.

But he was worshipped and revered in multiple Mesoamerican cultures and religions. Evidence of worship of Xipe Totec was found as far as El Salvador. Even though he was part of the creation of the world, he was also greatly associated with death. Diseases were all linked to the flayed god, especially eye ailments.

Human sacrifice was frequently performed in Xipe Totec’s name. The rituals were to do with fertility, spring, and growth. Xipe Totec is not only the flayed one but also the god of spring, seeds, and new vegetation. The flayed skin he wore was a representation of the shedding of the old skin like corn husks. Each year the earth sheds its old skin for a new one.

Xipe Totec may have been adopted into the Aztec culture from another area. The Aztecs conquered other people groups and created vassal states. Recent findings show that they may have taken this god from one of the groups they conquered. This is very similar to the Romans who adopted the gods from those they conquered.

The Aztec flayed god was worshipped throughout Central Mexico when the Spanish arrived. And it wasn’t just by the Aztecs. Xipe Totec may have originated from the Olmecs and their God VI or the god Yopi of the Zapotec people. Images and representations of him were found near Teotihuacan. These images and findings were related to the Mazapan culture. This culture existed a few thousand years before the Aztec period began.

During the early Postclassic period (500-1500 AD), Xipe Totec was worshipped along the Gulf Coast. The Aztecs conquered the Gulf Coast in the 1400s. After that, Xipe Totec became one of the Aztec’s most important gods. They could have already also included him in their pantheon before due to their geographical closeness. 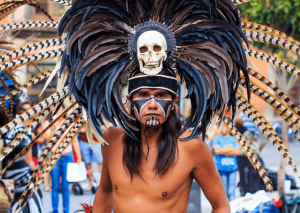 It is the first known temple dedicated solely to Xipe Totec ever found. It was found in the Puebla state of Mexico. The archaeologists were searching through the ruins of the Popoluca people. The temple was built in Ndachjian-Tehuacan before the Aztecs came to take over the area.

The flayed god was not one of the most beautiful of the Aztec gods. His natural ‘skin’ in statues and images is of a ruddy red color. But he is mostly known as the golden god because he wears the golden or yellow skin of sacrificial victims. This skin also represents the husks that shed in spring as plants and animals change and grow.

In some of the Xipe Totec statues, his suits of flesh are quite intricate. There is stitching over the heart where the victim’s heart had been removed. The skin also contained the victim’s hands which hung down by Xipe Totec’s own hands. He is often masked in artwork. Many statues and sculptures portray him with double lips and double eyelids.

In various codices, Xipe Totec is shown with his right hand raised and his left hand extending out. He sometimes carries an object, possibly ceremonial. He is also sometimes shown with a shield as well as a jar of seeds.

The eyes are often squinted or just not visible, and his mouth is open. Many artists like to focus on the skin he wears, showing his connection to life and renewal with the many layers.

Xipe Totec’s festivals were some of the most interesting of all the gods. He was celebrated each year during the spring equinox in the month of Tlacaxipehualiztli. There was an annual festival each year to celebrate earthly fertility. Sacrifices were made in ‘normal’ fashion as well as using gladiatorial sort of rituals.

The sacrificial victims were usually slaves or captives of war. And it was considered an honor to be selected for a ritual that would help ensure a good harvest. The victims were chosen and then their hearts were removed ceremonially. The priests would then skin or flay the victims, trying to keep the skin whole. This was to symbolize the dehusking or shedding of plants and seeds as they spread new seeds.

These human skins were then dyed and yellow and worn by the priests for twenty days after the ceremony. Young men who were not priests also wore them. During these twenty days, the Aztecs completed other fertility rituals. These rituals helped to bring about prosperity that year. The ceremony of putting on these skins is called Neteotquiliztli. The Nahuatl word means “impersonation of a god”.

Twenty days was about the amount of time it took for the skins to rot away. Then, they were buried at Xipe Totec’s temple. There was also ‘arrow sacrifice’ where a victim was tied and spread out. They were shot with arrows until their blood dripped to the ground. This symbolized the nourishment of the earth. This victim’s heart was also removed, and their skin was flayed.

There were also fake battles or games between those who were wearing the various skins. After they finished fighting or playing, they wandered through the city. They would demand gifts and sacrifices from the townspeople.

At the end of this festival month, there was also a gladiatorial sacrifice. From among the war captives or slaves, one person was chosen who had shown the most courage. This was especially a great honor. The chosen victim was placed on a circular stone and tied by the ankle. They were given ceremonial mock weapons, and they were put against fully-dressed Aztec warriors with real weapons.

Despite Xipe Totec’s link to death and disease, he was also worshipped and prayed to for healing. Sufferers of diseases, especially eye ailments would call upon Xipe Totec for help. The skins of sacrificial victims also contained healing powers. They could give healing if touched. Mothers would bring their sick children to touch the old skins.

Xipe Totec, the Patron of Goldsmiths

Gold was so important to the religious rituals of the Aztecs. They believed that it was actually the “excrement of the gods”, and its Nahuatl name was teocuitatl. It was used in ceremonies and treated as a holy material. The Aztecs required gold from the other states which they controlled. They used a gourd filled with gold dust as a measurement for how much they required.

If anyone was found stealing gold, it was taken as an offense to the gods, especially Xipe Totec. They were kept in prison until it was time for Xipe Totec’s annual sacrifices. This person would also be sacrificed and skinned as part of the ceremony.

Goldsmiths also involved themselves in the sacrificial ceremony. Each year, they had their own feast called Yopico during the month of Tlacaxipehualiztli. They would dress one of the local rulers in skins and dress him like Xipe Totec, creating a god impersonator. They would offer the impersonator food. There was also a dance and a war exercise. This impersonator might also have been sacrificed at the end.

Xipe Totec was also the god of metalworkers in general. Metalworkers in Azcapotzalco worshipped Xipe Totec in their own ceremonies. Those who had stolen silver or gold were taken through the streets. It was a warning for others not to do the same as them. Then, these victims were sacrificed to the god. Sometimes, they were burned or had their throats cut.

Check out the main points of Xipe Totec and his gruesome history:

The worship of Xipe Totec heavily involves death. And yet the purpose of all the rituals was to bring life and regeneration to the earth. He was considered an Aztec fertility god. Even though the sacrifices and ceremonies sound gruesome, they were for bringing life.

Xipe Totec represented the vital life force that lies inside of living things. Think of a seed. It’s bursting with potential. Soon enough, with the right nourishment, it will shed its husk. Then, it will grow into something that gives life to others.

Xipe Totec and his skins were the representation of this growth process. He is often pictured wearing so many layers because under those layers lies the force and the power, ready to be unleashed each year.

It could be considered an honor to be chosen as one of the sacrificial victims. Those skins become almost like holy relics. The Aztecs believe they brought life, prosperity, and healing to the people. It’s strange how this god could represent both life and death in such a closely linked manner.

Xipe Totec’s fertility festival was held in March the year the Spanish arrived. Unfortunately, at that time Xipe Totec didn’t bring life and prosperity. He only brought death and the destruction of the Aztec Empire.