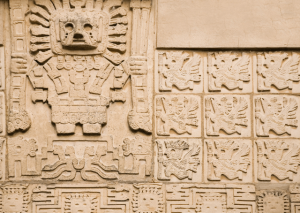 Xochiquetzal is the Aztec god of fertility. She is also the goddess of pregnancy, love, sexuality, and weaving. She is a lunar deity and is thus linked to the patterns of the moon.

Xochiquetzal’s name in Nahuatl meant something like “Flower Quetzal Feather” or “Precious Feather”. Xochiquetzal’s bio will detail the fertility goddess’ story and how she helped the Aztecs through sex, love, and reproduction.

Who is Xochiquetzal in Aztec Mythology?

Xochiquetzal’s name is a combination of two words. One is xochitl, meaning flower. The other is quetzalli, meaning Quetzal bird or the tail feathers of that bird. Her name is pronounced show-chee-ket-zal. Different from other goddesses, Xochiquetzal is always portrayed as a young woman.

She was the most beautiful of the Aztec gods. The other goddesses are portrayed as older and matronly. After the Spanish conquest of the Aztecs, this took on a sort of virginal connotation. But it wasn’t originally meant that way.

As weavers create their materials, their product grows. As a baby develops inside of a pregnant woman, her belly grows. And as the moon moves through its monthly cycles, the moon grows. These symbols are all linked in Aztec mythology. They tie together under Xochiquetzal’s domain.

She is also a lunar deity and so is linked with the cycles of the moon. She is the goddess of fertility and the moon. Its patterns match the fertile patterns of a woman as well as her cycles. In different images of her, Xochiquetzal follows the moon, showing its different aspects. She may, in general, represent one phase of the moon most often.

The Goddess of Beauty’s Origin

This goddess is very old and well-known, and yet the story of Xochiquetzal is a little unclear. There doesn’t seem to be many records of what exactly is. Some myths state that she is Tlazolteotl’s daughter, a goddess of both filth and purification. Her father was Piltzintecuhtli, the god of the rising sun. She might also have come from Tamoanchan. The Aztecs considered this their mythical ancestral place.

However, she was adopted from the Mayan culture, and Tamoanchan is a Mayan word. Xochiquetzal was based on the Mayan Goddess I. She was also the goddess of love, pregnancy, and weaving. Similarly, Goddess I was also a part of the lunar deities.

Xochiquetzal had a twin brother named Xochipilli. He was also a god of love, art, and beauty. But in his case, he was representative of homosexuality and the patron of male prostitutes. An image of them sitting together across from each other is in the Codex Fejérváry-Mayer.

In varying myths and legends, Xochiquetzal had many husbands. The Aztec goddess of fertility was linked with: 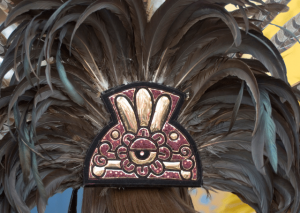 Xochiquetzal is not unlike Eve in the Bible. She was part of the beginning of humankind, used to bring about humans. The four creation gods were attempting to bring humans into the world. They made man and woman, and these two people had a son named Pilcetecli.

But there were no other people in the world, and so there was no one for Pilcetecli to marry. So, the gods created a woman out of Xochiquetzal’s hair to become Pilcetecli’s partner and marry him.

This is similar to the Christian story of the first woman, Eve, being created from one of Adam’s ribs. Because of this story, Xochiquetzal could be seen as the mother of all the women on earth. Therefore, she has strong links to childbirth and the process of creating new life.

Xochiquetzal had a reputation as a seductress. Like Eve, she was the first woman to sin in the world. She seduced her own brother Yappan, even though he had attempted to take a vow of chastity. Because he gave in to the temptation, Yappan was turned into a scorpion. But Xochiquetzal went unpunished. Some legends state that Yappan was her very first lover.

At some point in mythology, she also seduced Topiltzin-Quetzalcoatl. He was the Lord of the Toltecs. Her varying husbands were the result of the other gods fighting for her. Her marriage to Tezcatlipoca is probably the most well-known in the myths. He got jealous of her marriage to Tlaloc, and so he kidnapped her, forcing her to marry him.

Tlaloc returned to fight Tezcatlipoca to get his wife back. He was successful, but he forbade her from ever returning to mankind again. So, she was stuck in Tamoanchan, the ancestral land of the Aztecs. It was said to be a beautiful place but rather lonely. She might also have been the wife of the sun. The sun would move through Mictlan, the underworld, at night. Then it would return to the day to be with Xochiquetzal.

The Foul Smell of the Underworld

One of the Aztec legends claims that Xochiquetzal is the reason for Mictlan’s bad smell. One day, Quetzalcoatl was washing by some rocks. His semen dripped onto one of the rocks, and Xochiquetzal was there. The gods sent a bat to come and bit Xochiquetzal on the genitals as punishment. From there grew bad-smelling flowers. These were then presented to Mictlantecuhtli, the lord of the underworld.

Festivals, Worship, and Rituals for the Aztec Fertility Goddess

Each year, Xochiquetzal was worshipped alongside Tlaloc in one of his many festivals. Hueypachtli, or Tepeilhuitl, was celebrated to honor the rain god. But the worshippers of Xochiquetzal also joined in on this festival. She was also worshipped in the month of Toxcatl during that festival.

For Hueypachtli, the people celebrated through the offering of sacrifices, especially flowers. There was also drinking as well as sexual acts. A young woman was chosen to represent the goddess. She was dressed as Xochiquetzal and made into an ixiptlatli, or impersonator.

God impersonation and sacrifice were very common at many Aztec festivals in honor of the gods. The priest would decapitate the woman, and then her skin was flayed. It was like ceremonies in honor of Xipe Totec. One of the priests would wear the skin and then perform the act of weaving. Other worshippers would dance around him and confess their sins.

The Aztecs performed a similar ritual during Toxcatl. But before this festival, they chose a young virgin to marry a young warrior. This union lasted for a year until the festival. Then this woman, the impersonator of Xochiquetzal, was sacrificed to the goddess.

Xochiquetzal was portrayed as a beautiful young woman in images and sculptures. Instead of matronly, she was shown as seductive, alluring, and youthful. Because of her connection to the art of weaving, she was often carrying weaving tools. She carried tools along with bouquets of flowers.

She was depicted in rich clothing, jewels, and sandals. This showed her high status amongst the gods. She also had a rather large nose piercing, which was also a status symbol. A small clay Xochiquetzal statue can be found in Museo Amparo, Mexico. This statue portrays her not as fearsome but as beautiful. She often wore a jeweled necklace, feathered headdress, and patterned skirt.

Xochiquetzal is seen as the mother of women and protects women in childbirth and after. But it’s unclear whether she had children of her own. In art, she is often shown holding a child or nursing a child, but we’re not sure who this child is meant to be. Some areas believed the child to be Quetzalcoatl, the sun god.

Many codices portray her in various images, either alone, with her twin brother, or with other gods. The Codex Borgia has one image of Xochiquetzal and Tlaloc sharing the “stage” at a festival. This was most likely Hueypachtli.

Take a look at the hot points of Xochiquetzal and her story:

Many gods and goddesses of the Aztec pantheon are connected with fertility/childbirth. Think Chalchiuhtlicue and Coatlicue, both patrons of newborns and childbirth. But instead of young women, they were shown as older and matronly. All of them already had many of their own children.

But Xochiquetzal was still a ‘mother’ in her own way. There wasn’t much information about any children that she bore. She was mother to womankind, having offered her hair as the source of their origin. She was also the mother of all. She encouraged love and sex both for pleasure and for reproduction. She helped the propagation of the species.

She is unique in that her power lies in her youthful beauty and allure. She is seen as a seductress and a woman of many lovers. Yet, unlike our current culture, she wasn’t punished or looked down upon for this fact. Instead, she was worshipped and revered for her powers. So much so that every year, perhaps even twice a year, a young woman was sacrificed in her honor.

Oddly, after the Spanish took over the Aztecs and took some of the Aztec images, Xochiqueztal’s image changed. The Spanish missionaries equated her young woman depiction to that of a virgin. For devout Catholics, virginity was highly prized. It meant she was chaste, clean, and pure.