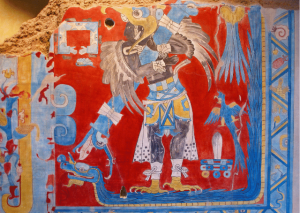 Xolotl is the Aztec god of lightning and fire in Aztec mythology. Those are the main things of which he is known.

He is also considered the god of twins, diseases, deformities, guiding souls, and bad luck. He is the twin brother of Quetzalcoatl, one of the most famous gods in Aztec mythology.

Who is Xolotl in Aztec Mythology?

He is associated with dogs and the underworld, and overall, he has negative attributes. His name may even mean ‘dog’ in Nahuatl. Xolotl’s negative qualities are evident in the images that are associated with him. After looking at a primary source image of Xolotl, one would know he is a god one doesn’t wish to anger.

This Aztec god appears in many different myths. One can find his name mentioned in many stories in various codices. While the many stories give us more information, the amount of them can confuse us as well. According to many myths, Quetzalcoatl and his brother Xolotl were both born of Coatlicue.

Her name means “Serpent Skirt.” Some stories state that she was a virgin, but she was also a goddess and the mother to other Aztec gods.

Xolotl is connected to the dark side of Venus, giving him the name the god of fire, or also called “the evening star.” While Quetzalcoatl became one of the Suns/worlds, Xolotl was left behind and remembered for what he didn’t do.

In some myths, all the gods wanted to sacrifice themselves so that the human race could survive. Xolotl might have been the executioner, killing off each god one at a time. Or he was waiting his turn for death. Either way, when it came to the time to give of himself, he refused.

Some myths have him cry so much at the prospect of his sacrifice that his eyeballs fell out. That is why he is often depicted in art with empty eye sockets. Other myths portray him as a master shapeshifter. To escape his turn at being executed, he changed into a maize plant to hide. Then, as the gods were coming after him, he shifted again into an agave plant.

Lastly, he turned into a salamander. It’s unclear whether he was eventually caught and executed or not by Ehecatl, the god of wind.

Some tales state that he and Quetzalcoatl traveled to the underworld or Mictlan. They went together to find bones. They used these bones to create new life from the old world and put it into the new world.

The Aztecs might have considered that portion of the story the movement from night to day. Xolotl guides the sun as it moves through the underworld at night. That way, it can go through the daytime sky once more once morning comes.

As time moved on and one world fell after another, the fifth Sun came into being. Similar to the myth involving Tonatiuh, the Aztec sun god, the Sun refused to move. It declined to travel across the sky, and so the gods were puzzled.

However, Xolotl’s tale is not all sinister. He is significant to mythology playing key roles. He is the guide to the Sun. And because of his connection to the underworld, he was considered to be a soul-guide. He would accompany recently-deceased souls to their safe place in the underworld.

In many tombs and gravesites, images and sculptures of dogs were often found. Those deceased wanted a guide to take them safely into the afterlife.

The Twins: Quetzalcoatl and Xolotl’s Story

For the Aztecs, twins were seen as a kind of deformity, representing a negative duality. One would be light and the other darkness, so it is not surprising that one of the twins was killed at birth. It was done to protect the other from that negative energy. This duality is no different with Quetzalcoatl and Xolotl. Xolotl became the god of deformities.

They are supposedly representations of the phases of Venus. Quetzalcoatl was the ‘morning star’ and Xolotl, the ‘evening star.’ He became the ‘dark’ twin or a representation of the murdered twin. This relationship was not unlike the relationship between Hades and Zeus,

Some myths portray the brothers together, and others do not. It’s unclear whether they are meant to have a positive or opposing relationship. Even in some legends, Xolotl is not exactly Quetzalcoatl’s brother. He could be more like his canine companion.

His Image: How is the Aztec Thunder God Depicted? 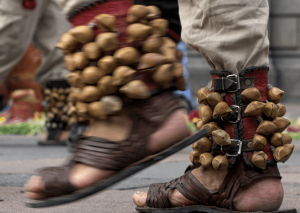 Xolotl’s image depends on the primary source it’s found in. However, he is most often portrayed as having a dog’s head. Since he is also the god of sickness and deformity, he too looks ill. Xolotl will be created as a skeleton man with reversed feet. And he also has empty eye sockets.

He might also be wearing a wind jewel which is similar to a conch. Like other gods, he is often depicted wearing earrings, and he also has ragged, dog-like ears.

For the Aztecs, the dog was not a positive creature. It was associated with all things dirty, diseased, and sinister. Therefore, it is no compliment that Xolotl is depicted with a dog’s head and considered a ‘canine god.’

The name of the Mexican Hairless Dog, a very old breed, is Xoloitzcuintle. Xolotl is the embodiment of these negative characteristics. However, he also embodies other canine qualities such as guarding and guiding. He protects and guides the sun through its nighttime journey. He also guides new dead souls to their next place in the afterlife.

One of the creation myths states Xolotl didn’t travel with his brother to collect bones. Xolotl went alone. Only this time, he was in dog form. He went to Mictlan, found the bones of humans from an earlier world. On his journey out of the underworld, he broke some of the bone. But with what he had left, he used drops of his blood to create the next humans.

Some other names for Xolotl could be “The Animal” or even “The Dog.” Even though dogs were considered negative in Aztec culture, they were helpful during the afterlife. Not only were dog sculptures found with various bodies in tombs, but so were dog remains. Dogs may have been filthy, immoral creatures, but they helped carry their masters to the afterlife.

They would need to help their dead masters to cross a deep river. Dogs could pull them along until they safely reached the other side. So, the Aztecs often performed ritual dog sacrifices. Then, the remains could lie with the deceased. These rituals and ideas are not unlike Ancient Egypt. Pharaohs and other important people were buried with things that would assist them in their after-death journey.

Xolotl and the Mesoamerican Ballgame

Strangely, Xolotl was also linked with the Mesoamerican ballgame. It was a game and a sport but also had ritual connotations. The indigenous cultures in Mexico still play a version of the game. The ball is made of rubber, and players would often use hips to get the ball through stone hoops on the court’s sides.

Because Xolotl guides the sun, he rules over the day or ‘ollin,’ meaning movement. In the world, ollin is represented by pulsating, moving things. Examples of ollin are childbirth, earthquakes, wings, and ball-playing. Therefore, the Aztecs connected Xolotl to this ancient ballgame.

Even though Xolotl was a god with a fearsome, sickly appearance, there isn’t much mention about sacrifices. Perhaps there weren’t rituals associated with his name because of his negative attributes.

The dog god had a rough beginning. He was the twin brother of one of the most powerful gods in the Aztec pantheon. Twins in the time of the Aztecs were seen as evil and a deformity. One would always embody evil and the other good. Xolotl didn’t receive any of the positive characteristics of his parentage. Instead, he was connected with the dog. He was the ‘dark twin.’

Unfortunately, Xolotl’s tale was one of sadness and trickery. He was there at the beginning of the world, yet many stories say that he didn’t want to give his life to assist creation. He cried out his eyes, and so that is why he has empty eye sockets. He also tried to escape this sacrifice by changing into various plants and animals. But in other stories, he went with his brother to collect bones to create humans for the next Sun or world. So, there are two sides to this canine god.

The dog was a filthy, immoral, diseased, and sinister creature in Aztec culture. Both the dog and the Aztec god Xolotl were known for their skills as guides to the underworld. Xolotl could also be seen as a god of rebirth and regeneration. His ability to move between the living world and the underworld displays his power.

We can think of Xolotl the way he’s portrayed. He is the embodiment of all that is bad in the world, a sort of Dorian Gray, and it’s seen in the artwork attributed to him. Or he could be viewed as the soul-guide to the underworld. He would help those recently dead find peace in the afterlife.

The Aztecs didn’t appreciate dogs because they thought them to be dirty and dangerous. However, they did know that dogs could be helpful. Xolotl’s positive canine attributes could be guarding and guiding. He protected the Sun as it made its nightly journey to keep in motion during the day. That way, the Aztecs could have good sun for their crops to grow.

Those on the brink of death could feel safe that their souls would be carried by the fearsome yet protective Aztec god Xolotl. Strangely enough, Xolotl was the patron of the Mesoamerican ballgame. But perhaps it’s not so strange. Dogs do like to play games, after all.

There are a lot of negative characteristics associated with the Aztec God of Thunder. But despite those, Xolotl played a huge and significant role in Aztec mythology.