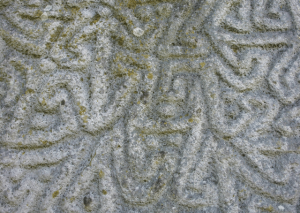 Aengus, god of love, youth, and poetry in Celtic mythology, was the son of the Dagda, the chief of the Tuatha Dé Danann, the Celtic pantheon.

He was a very attractive young man, known for his ability to woo with his words. He was also a shapeshifter and had many other talents.

Read on to find out how he used shapeshifting to find his true love.

Who Is Aengus in Celtic Mythology?

Aengus, or Óengus in Old Irish, means “one strength,” and he was the Irish god of love, youth, and poetry. He lived with his family on Brú na Bóinne. His father was the Dagda, his mother Boann, the river goddess, and his siblings were Midir and Brigid, to name a few. Midir played the role of his foster father, and Brigid was a fire goddess later married to High King Bres.

His powers were varied, but one of them was his youth which gave him strength in many areas. His youth and skills with words often helped him get out of things or play tricks on others. He also had four weapons that he carried with him. Two of them were swords, and two of them were spears.

Not only that, but he was often accompanied by birds that would fly around him. They would deliver messages and go on vengeful errands for him as well. Aengus was a character in many myths, and most of them involve him finding his true love. In the end, it was successful, but it took a lot of time and effort, and he had to use his magical powers to do so.

The Powers of Aengus: Celtic God of Love

Aengus was an amazingly powerful god. The other gods in the Celtic pantheon had their own powers. But Aengus had an interesting variety that made him unique.

Aengus carried four weapons with him. Two of them were swords, and the other two were spears, and they all had names:

The pagan god of love was the result of a forbidden love affair. His father, the Dagda, had for a long while lusted after the wife of King Nuada of the Silver Hand. He was sometimes known as Elcmar, and he was married to Boann, the river goddess, for a time. Theirs was not a happy marriage, and when Elcmar went away for a little while, Boann and the Dagda made love.

Boann realized that she was pregnant. She was afraid that when her husband returned, he would find out what she’d done. So she and the Dagda came up with a plan. He had powers of his own, and he reached up into the sky and held the sun in place for nine months.

That way, it looked like she was only pregnant for one day, and when Elcmar returned, he had no idea about the birth. They gave the child to Aengus’ half-brother to act as his sort of foster father. That way they could even further hide Aengus’ true parentage from Elcmar.

The Myths of Aengus 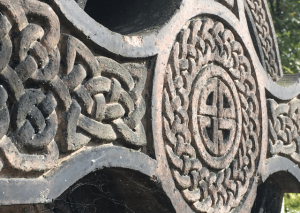 Aengus grew up as a cheeky, clever young man, and he used his skills to get what he needed. Sometimes, he even turned the tables on people.

Even if bad things happened to him, he eventually won out using his powers.

– Aengus and Stealing Back His Home

At one time, Aengus and the Dagda worked together to steal Elcmar’s home out from under him. Before, Elcmar lived at Brú na Bóinne with his wife Boann, but the Dagda and Aengus used their tricks to take his home. When they visited him, they asked him if they could stay a day and a night. However, in old Irish, a day and a night could also mean all the days and nights.

Elcmar agreed heartily, but then he later realized his mistake. Aengus and the Dagda moved in, and the poor man lost his home, and unbeknownst to him, he’d also lost his wife! Later they divorced, anyway. Karma stinks, though, because Aengus later used his father’s tricks on him.

One day, Aengus fell in love with Étaín, who was actually mortal but very beautiful. To his dismay, his brother/foster father Midir always loved her. They competed for her affections. Midir eventually won the competition, and Étaín chose him over Aengus.

Aengus was sad, but Midir got his comeuppance. He was already married, and his first wife was furious when she found out. She was a sorceress, and to separate the happy couple, she turned Étaín into a fly.

Due to his powers, Aengus was able to spot Étaín in her new form, but sadly, she died. She flew into a cup of wine and was swallowed by a woman, causing her to become pregnant. Because of her death, Aengus sought out Midir’s wife and decapitated her for what she did.

– Aengus and His Dream Girl

Later, Aengus began to have dreams of a woman again and again. He fell in love with her instantly, and he knew that he needed to find her. His parents tried desperately to help him find his true love, and they asked a friend to assist. King Bodg Derg of Munster finally found her after a year of searching, and her name was Caer Ibormeith.

Aengus raced off in search of her, and his search ended at a lake called the Dragon’s Mouth. This was where he found women in chains, 150 in all because it was the time of year where these women had to spend a full year as swans.

He knew in his gut that his true love was amongst these women, but there were too many of them that he couldn’t quite see her. So he struck a deal with the men who had captured the women.

If he could figure out which of these women was his true love after they turned into swans, then he could take her away, and they could be married. The captors agreed, and the women turned to swans.

It was now up to Aengus to find her, and he did so by turning into a swan himself. He found her, and they flew off together, singing a song that lured the captors to sleep so that they could get away.

In another story, Aengus had been away for a while. When he returned home, he found out that his father had left everything to his other siblings and nothing to him. It was likely because he was a lovechild. Aengus was furious, and he knew that he had to do something to get his inheritance back.

So he asked his father the same question that he and his father had asked Elcmar. His father didn’t even realize this trick, and he agreed to let Aengus stay all the days and nights. Therefore, Aengus became the owner of his family home. Despite their animosity, the Dagda was later buried there at Aengus’ request.

– Aengus and a Resurrection

Aengus also had a foster son of his own named Diarmuid Ua Duibhe. Diarmuid fell for a young woman who was engaged to a very powerful man. The family was furious, and so they pursued Diarmuid, trying to kill him in revenge. Aengus took pity on his foster son, for he knew what love was like, and he protected him along the way.

He gave him hiding spots, and he helped him with weapons as well. But despite his help, the family eventually found Diarmuid and killed him. Aengus brought his foster son’s body back to his family home. He used his ability (his magic breath) to resurrect him.

However, his ability to resurrect was mostly only temporary. So he would breathe life into his son whenever he wanted to speak to him about something.

Aengus was a young yet powerful god, and he was famous for his tales as part of the Tuatha Dé Danann.

Check out the main points of Aengus and his story that we covered here in the article:

Aengus was an interesting, varied god, and he has a sort of similarity to the Roman god of love, Cupid. He was full of tricks and intelligence, and he used his powers for his own gain, but he also fought for true love. With his youth and beauty, it’s no surprise that he was in love twice.

Both times, he gave everything for the woman he loved, even if he lost her. It’s not often we hear about such loyalty amongst the gods, and perhaps that could be considered his greatest power.