Brigid: The Exalted One

Brigid, goddess of fertility, spring, and wells, was a Celtic deity of pagan Ireland. She was a prominent member of the Tuatha Dé Danann, meaning “the folk of the goddess Danu,” which is the pantheon of Irish deities.

Not only was she the goddess of fertility, but she was also the goddess of healers, fire, poetry, blacksmithing, animals, the dawn, and was called “The Exalted One.”

In this article, you will learn about Brigid’s beginning and how she created a certain grieving tradition for Irish women.

Who Is Brigid in Celtic Mythology?

Brigid was beloved by the poets in pre-Christian Ireland because of her ability to give poetic inspiration. She was also linked with healing, protection, blacksmithing, and animals. People would sacrifice to her to gain inspiration, healing, and protection.

It seems her domain had no end, for she was also the goddess of wells and waterways, and her name comes from the Proto-Celtic word “Briganti,” which means “The Exalted One” or “The High One.”

You can see this connection in the English word “bright,” which stemmed from the same root word. Her name is the inspiration for the modern name Bridget, and this goddess has many similarities with the Christian saint St. Brigid of Kildare.

This could be that the pagan goddess was brought into the Christian story once Christianity gained popularity, so her story lingers. Her domain consisted of many things, and because of that, we know that she was a very important and respected goddess in the Irish pantheon.

She was offered sacrifices to and was worshipped for her various abilities, but her attributes were often opposing. On one hand, she was the goddess of fertility and the protector of women and children. On the other hand, she was the patron of poets and blacksmiths. She was linked to passion and fire and contradictorily, connected to serenity, calm, and water.

Brigid and Her Family

Brigid was mentioned in the ancient writings about Ireland, such as Cormac’s Glossary from the 9th century or Lebor Gabála Érenn, a collection of prose and poetry about the history of Ireland. In them, Brigid was the daughter of the Dagda, the main god of the Irish pantheon.

He was the one who passed down the gifts of healing and wisdom to her. Her mother was possibly Danu, the river goddess, or Boann, the fertility goddess.

She married the High King Bres and with him had a son named Ruadán. In another tale, she married a man named Tuireann, and they had three sons: Brian, Iuchar, Irchaba. The most popular tales state that she was the wife of the High King Bres, but tragically, her son died in a bloody battle. Her laments for him became legendary.

It was said that Brigid was born at sunrise and had flames shooting out of her head. She was born into the ancient circle of gods, the Tuatha Dé Danann, who practiced magic. Because of the flames she was born with, Brigid was automatically linked to the cosmos.

However, for whatever reason, her family lost their mystical lands, which lay to the west. They could no longer live there, so they searched for new land to live and practice their magic in. They traveled to the misty isle of Ireland to settle. However, once they came, a great battle began between them and the settlers already residing there: Firbolg and the Fomorians.

They had victory over the Firbolg in Galway. Then they faced the Fomorians (fearsome giants) in Sligo. The gods won the battle against Ireland’s residents, but they paid the ultimate price. 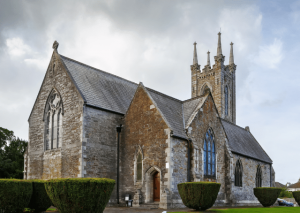 Brigid is credited for creating the grieving action of “keening,” and it was because of this battle. When they went to fight against the residents of Ireland, her father was injured and later died from his wounds.

Sadly, despite the overall success of her son Ruadán in the battle, he fell and died right there on the battlefield. Brigid went to him and lamented her son as she laid next to his dead body.

She was wailing loudly in grief, and her laments were almost like a sorrowful song. According to myth, this was the first time that sadness was felt in Ireland.

Because of Brigid, Irish women would keen at the graves of their dead as part of a tradition. That is also why Brigid was the protector of graveyards.

She is often portrayed with red or “fiery” hair because of her connection with flames and, of course, Ireland. She would wear a cloak that looked like a sunbeam, and flames would be coming out of her head. She was a youthful woman, and she might have been pictured with things like that were under her domain. These items are flames, children, domesticated animals.

She did have two oxen among her coterie, showing her protection and patronage of animals. Their names were Fe and Men. She also kept company with a wild boar named Torc Triath as well as a ram named Cirb.

Festivals and Holy Sites of the Celtic Goddess of Fire

There is one festival in Ireland for Brigid. It is also the same festival as St. Brigid because she soon became inextricably linked after the onset of Christianity to the goddess Brigid. Worship of the goddess and the saint occurred during the festival Imbolc, and it takes place on February 1st of each year.

February 1st was the beginning of the Irish year, and so it was a time to celebrate life, rebirth, healing, protection, and inspiration. Because her holy sites were wells and waterways, the Irish people would leave sacrifices to her at those spots to ask for healing, wisdom, or protection.

Goddess Brigid’s offerings might be things like food or coins that the people would leave to ask for blessings. Even though all wells and waterways were her holy sites, two main ones have gained popularity in Irish history. First is Brigid’s Well in Kildare, where the water in the well was said to heal any wound or any sickness. Today, it is dedicated to St. Brigid, but there is still an eternal flame there for Brigid, the goddess.

The other is Brigid’s Well in County Clare, which was built in a church under a cemetery. Both places are holy sites, and visitors go even today to earn the saint’s or the goddess’s blessing. One of Brigid’s other symbols is the Brigid Cross, and it is still popular in Ireland, especially around Imbolc. It is made from rushes or grass and is a very popular symbol, and many around the world might recognize it as a protection charm.

Brigid and St. Bridget of Kildare

Once Christianity came to Ireland, monks turned the goddess Brigid into her Christian equivalent. This was St. Bridget of Kildare. There is some debate about whether or not this saint was actually a real person or shared the same mythical status as her pagan counterpart. Either way, St. Brigid, like Patrick, became a patron saint of Ireland.

Brigid and St. Brigid share similar characteristics and power of similar domains. She had been born to a pagan family, but with the help of St. Patrick, her family was converted to Christianity.

At a young age, she began to perform miracles such as healing, connecting her to the Celtic red-haired goddess. As she grew in the faith, she was credited with starting a monastery as well as a school of the arts.

Her life was dedicated to faith and kindness, serving the poor, and providing healing. She and Brigid the goddess shared many stories and attributes, and even now, they share the same holiday and holy sites.

Both goddess and saint were rumored to have been approached by people many times for blessings, healing, and protection. However, Brigid the goddess would often put these people through tests or lessons as the price for whatever she gave them to help them learn and grow.

Brigid as a goddess can be seen as one of the pantheon in the game Dungeons & Dragons. She is also a subject of songs and poetry, and of course, we know her as St. Brigid of Kildare. They are now almost exactly one and the same in the eyes of the Irish people. Brigid’s name lives on in Irish culture as well, for many are called Brigid or Bridget.

Brigid was a powerful goddess in Irish folklore, and here are the main points of her history:

It’s refreshing to see a woman given such high esteem in a culture’s mythological pantheon.

However, unlike other mythology, she only seems to have been given positive characteristics: healing, inspiration, and protection. In that way, it made her seem almost human, and perhaps that’s why it makes sense that many people think she is the inspiration for St. Bridget of Kildare.

She also was so grieved for the loss of her son, and her reaction was so impactful that it affected the traditions of the later people of Ireland. Now, that’s power.