Cailleach is a goddess of many names and titles, but for the most part, she is a divine hag.

Even her name means “old woman,” and she has the power to handle storms, control winter, and build mountains. Cailleach was known in Ireland, Scotland, and the Isle of Man.

Read on to find out her beginnings, special powers, and just how hag-like she really was.

Who Is Cailleach in Celtic Mythology?

Cailleach was many things. First and foremost, she was often called a hag or old woman that controls winter. Her name in both Scottish and Irish Gaelic literally means old woman. Probably. that is why she has so many other names because any old woman could bear the name “Cailleach.” It could be just her title.

However, Cailleach was a powerful woman, despite her age. She was known as the Queen of Winter. She could decide just how harsh or how long she wanted winter to be.

The people of Ireland, Scotland, and the Isle of Man held her in high esteem. Even for the political power of certain regions, people looked to this goddess for approval. They depended on her choices, and she used her power in whatever way she saw fit.

But despite the power she held, she was also the goddess of grains. She loved and protected animals, even if she didn’t always approve of men.

Attributes of the Goddess of Winter

The Divine Hag is likely the best way to describe her, and she was a fearsome creature to behold. She looked like an old woman, but more than that, she had red teeth, one eye, blue skin, and was often veiled. She could travel over mountains and hills, ride storms, and shapeshift into a bird.

Her attributes varied greatly in the legends and the regions, and she was immortal.

Brigid was the goddess of summer; the Celtic goddess also named “The Exalted One.” In Scotland and on the Isle of Man, they believed that once the Celtic year ended on Halloween or October 31st, Cailleach returned to the world. But on May 1st, she turned back into Brigid to mark the start of the warmer seasons.

– Cailleach’s Names: A Goddess of Many Titles 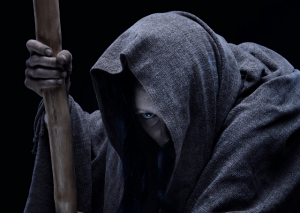 It is not unusual for a god and goddess to go by many names and titles. This is true of Celtic mythology, where many groups shared beliefs but not languages.

In the case of Cailleach, she was shared by Scotland, Ireland, and the Manx group on the Isle of Man.

She went by many names, which include:

– Cailleach, a Mother Many Times

Cailleach, because she could move through time and age herself, was able to have many children. In some stories, she would return to her youth to have more children with various men. One of the men that is connected with her is a trickster spirit named Bodach. Together, they had multiple offsprings.

For many, she was seen as the old woman ancestor of their people. She had many children and foster children. So the Irish people considered her as the mother of every tribe in the country.

Myths of Cailleach, the Divine Hag

This goddess was beloved by poets and storytellers, so she’s involved in many tales in Celtic mythology. The myths depend on from whence they hail, but many of them are similar and link to each other. Cailleach was an interesting goddess.

Her myths showcase her ability to sort of find a middle between being fully evil and fully good.

– Cailleach and the Building of Mountains

One of Cailleach’s symbols was her special hammer, used to form the hills and mountains of the land. In Scottish tales, Cailleach was responsible for the mountains and hills. As she was traveling over the land, she dropped some heavy rocks from her bag. A similar story states that she built them on purpose with her hammer.

That way, she could use them as stepping stones as she walked. Also, in Scotland, Cailleach might be seen as more than one goddess or Cailleachan. These were the storm hags. They had the destructive power of the weather and controlled all the natural elements.

In one story, winter comes off the coast of Scotland because Cailleach is washing her “great plaid.” One can hear the water coming from far away, and then suddenly, the ground is blanketed in white (her plaid).

Imbolc is a holiday celebrated across Scotland, Ireland, and the Isle of Man on February 1st. It’s kind of like a fertility festival, celebrating the end of winter and the starting of new life. On February 1st, the people would use Cailleach like the way Americans use a groundhog. Both help to determine the length of winter.

On this day, Cailleach would run out of firewood. So, according to the Manx people, she would shapeshift into a bird and go in search of more wood. The people could tell if she wanted winter to last longer if she made the day lovely and sunny.

The light would help her find more firewood. But if the day was dark and gloomy, that means Cailleach overslept, and winter will be over soon.

Another story says that Cailleach, her lover Bodach, and their many children needed shelter. So they sought out the people of Glen Lyon and Glen Cailleach in Scotland to ask for it. The sight of Cailleach can be fearsome to many. But despite that, they were granted shelter by the people in these areas.

The people of Glen Lyon and Glen Cailleach were rewarded for their compassion. As long as Cailleach and her family stayed in the shelter, the land around the area grew very fertile. When she went to leave, she left the helpful people a lovely parting gift.

They could keep their fertile ground forever. However, between May 1st and October 31st, they would need to put up stones for her family.

Rituals for and the Holy Sites of the Celtic Goddess Cailleach

There are a few “holy” sites connected to Cailleach where she might have resided. Even today, these sites have kept their links to Cailleach known.

In Glen Lyon and Glen Cailleach, the ritual of laying the stones for Cailleach’s family is repeated to ensure the land’s fertility.

Cailleach and Other Goddesses

There are similar goddesses in other mythological traditions. But Cailleach has remained the most consistent in the mythology.

These other goddesses or divine hags include:

The idea of a hag with magical powers linked to the harshness of winter is a very popular figure. Cailleach is no exception and has appeared in various media over the years.

In addition, one can often see this sort of figure in much medieval folklore: the veiled old woman with a fearsome, frightful appearance, who holds great powers in her hands and can hurt or help. You undoubtedly have seen this character in literature and media before

Cailleach was a fascinating character in Celtic mythology, where she played a unique role.

Here’s what we’ve covered in the article:

Cailleach is not a unique figure to us, for we’ve seen her likeness repeatedly in literature from other cultures.

In the case of Celtic mythology, she was both feared and revered, and the people held her in high esteem, garnering her good opinion for who would take over leadership of clans and the like.

However, Cailleach is a woman all unto herself, for she does as she pleases, has the power of the weather, and wanders the earth, climbing hills and mountains. It is a power to be respected and, in our day and age, envied.