Cernunnos: Mystery of the Horned One

Cernunnos is the Gaelic god of beasts, nature, and wildness. He is called the Horned One or the Celtic horned god, and he was the mediator between humans and nature. While he remains a mysterious god, there are many horned gods in Celtic mythology that he could have been. Read more about the Horned One and all his mysteries in this article.

Who Is Cernunnos in Celtic Mythology?

Cernunnos, or the Horned One, is the god of beasts and wild things in Celtic mythology. Sadly, we don’t have a lot of information about him. That could either be because some stories are missing from the mythologies or the fact that there are around 50 horned gods in Celtic mythology. In artwork, he is often shown as an older or middle-aged man with antlers and a beard, and many times is depicted sitting cross-legged. 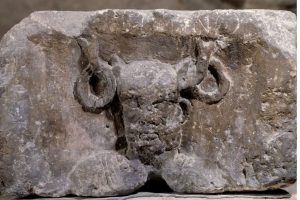 This horned god of the forest ruled over nature and all the wild things of the world. He was a god of nature and a god of animals, and in some of the tales, he was seen as their leader. Not only that, but he was a sort of natural peace-keeper. He could mediate between men and beasts as well as beasts of different kinds.

He might have been something of a fertility god or a protector god, or even a god of hunting. Like other nature gods, he was connected to life and creation, meaning he might have been a creator god. Because of his lack of entire mythology and mixed stories, it’s not exactly clear what all of his attributes were. But overall, he was a god of nature, and that was where he spent his time.

What’s in a Name?

The name comes from ancient Gaelic, meaning “horned” or “horned one.” The word part “cern” is common in Indo-European languages to mean horn or antler. It’s very similar to the Greek word “corn,” such as in the word unicorn, a horned animal. Cernunnos, like Cailleach, is more like a general term for a horned god.

He doesn’t really have his own mythology and might just be a blend of many different deities, so scholars kind of use his name as sort of an overall name for any of the horned gods in world mythology.

Story of the Celtic God of the Hunt

Images of Cernunnos were first found in northern Italy, which was part of the Celtic world, starting around 400 BCE. Despite that, he made his way to Ireland and the British Isles, where he was most widely worshipped. Christianity later grew and took the place of former pagan rituals. After that, the Christians depicted Cernunnos as sort of an Antichrist figure.

Also, there might have been some confusion between him and the character of the devil. In many Christian paintings, the evil character, or the devil, is portrayed as having horns and looking like an animal. This connection to Cernunnos might have been because of his very powerful influence in the pagan world. The Christians wanted to weaken his power.

Unfortunately, Cernunnos is only mentioned once by name in historical sources. So, he doesn’t have the same anthology of myths to his name as the other Celtic gods. He does, however, bear similarity to many other horned deities in the Celtic world and shares some of their attributes, creating some confusion about him. However, he could either have been these deities or merely was inspired by or inspired them.

Cernunnos and Others: Who Was He Really?

Herne the Hunter: There is some connection between Cernunnos and Herne the Hunter because they both wore antlers. However, Herne the Hunter was a specter, and he haunted the Berkshire woods in England. He also hunted around a particular tree, and he rode a horse. However, he also tortured cattle, ending his kinship with Cernunnos.

Conach Cernach: There is a similarity to Cernunnos because of the base word “cern,” meaning horn or antler. This character is from a group of stories called the Ulster Cycle. There isn’t much else besides the name that Conach and Cernunnos have in common.

Pan and Silvanus: These gods are very similar to Cernunnos because they were also horned gods in the Greco-Roman traditions. They also looked identical to goats, and they were the rulers of the wild world.

Wotan: Wotan was a Germanic god of the hunt. He wore antlers, and he would lead spirits on hunts. He was very closely linked with animals and their attributes.

Baphomet: Some believe that Cernunnos was the inspiration for the Knights Templar to create Baphomet. He was like a demon figure they might have worshipped. The gods had similar physical characteristics to one another.

Saint Ciarán: There might also have been a link between Cernunnos and Saint Ciarán, one of the Twelve Apostles of Ireland. The story goes that this man was able to tame animals, and they became his friends and followers.

Cernunnos in Other Religions

A horned god is an image abundant in many mythologies around the world. In many cultures, a priest or religious person might take on the appearance of animals in certain rituals. To do so, they would don things like animal hides and antlers or horns.

Today, Cernunnos is a figure in both Wicca and Neopaganism. He isn’t named as such, but Cernunnos worship and Cernunnos offerings occur in both religions, which still exist today. In Wicca, the horned god and his relationship with the goddess play out in the cycle of seasons. In the fall, the horned god dies.

Like the land, he lies dormant until the spring when he is resurrected. However, this isn’t really linked to past rituals but rather a new thing created with these newer religions based on pagan concepts. Some of his most common imagery used today comes from the 1931 book by Margaret Murray called “The God of the Witches.” In the book, she describes Cernunnos as a godly/ghostly horned figure in the forest and likens him to Herne the Hunter.

Cernunnos had many symbols connected to his name. The horned god symbols included:

The Pillar of the Boatman is the one location of Cernunnos’ name. It was created in Paris during the 1st century BCE and had multiple other gods and goddesses on the Pillar. Cernunnos was one of the gods shown, and in this image, he had torcs hanging on his antlers. Torcs are metal rings that are usually hung around the neck. 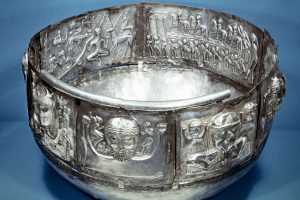 Cernunnos’ depiction of the Danish Gundestrup Cauldron is probably his most famous representation. This cauldron was perhaps created in a part of Greece that was part of the Celtic world. There was no name in this piece of art, only the image of a horned god thought to be Cernunnos.

While he was the god of all animals, he is most often linked with the stag. Many of his artistic representations show him as a human mixed with a stag.

Since Cernunnos and horned gods, in general, are pretty widespread, it’s no wonder that there are a lot of references and images of him in pop culture.

Sadly, there is not much known about Cernunnos as an individual god. His stories have been lost to time and history. However, we know a little about his attributes and his connections to other gods. He is even still well-known today despite his mystery! Take a look at the overall list of facts about Cernunnos covered in this article: 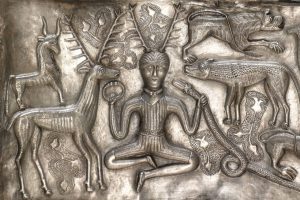 Cernunnos was the god of all wild things, and he represented that wildness. He was a mysterious and mystical figure, and he became associated with many things throughout time, from life to death. He could command the animals and wild things, and he was able to spread peace between man and beast. His power lingers on even if his story is lost, and perhaps he feels some satisfaction that there are still people who worship and remember him even today.