Dagda: Magic of the Good God 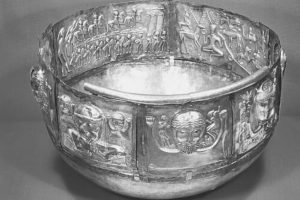 Dagda, god of gods, went by Dagda or The Dagda. He was the chief and foremost god of the Irish group of gods, the Tuatha dé Danann. He was very wise, very skilled, and had many domains such as fertility, agriculture, and death. Read this article to find out how the chief of the gods began and his involvement in multiple Celtic myths.

Who Is Dagda in Celtic Mythology?

The Dagda was the chief of the Irish gods, and he had many powers. He had power over fertility, agriculture, death, and he was also a druid, capable of much magic. He had three sacred items that only added to his power: a cauldron, a club, and a harp. These treasures made him both powerful, respected, and a little bit dangerous if one got on his bad side.

Dagda had many children, and even though he was married, living at Brú na Bóinne, he also had many lovers. His name means something like a good or great god or maybe even “shining deity,” depending on the language of the root word. However, all his names portray the power in the position he held over the other gods. He was also good-looking, even though he was sometimes depicted as slightly oafish.

He was very tall and large, with a long, wild beard. He was often shown in a cloak with a hood over his head. He had a fierce, country-boy kind of an appearance, and sometimes in art, the cloak wouldn’t fit, showing his butt. Some scholars think that this appearance was changed over time. Christians writing down Irish stories may have wanted to “discredit” this powerful god.

A God of Many Names: Dagda’s Epithets

It’s only fitting that the main god of the Tuatha dé Danann had many names, showing off his power. These names included but weren’t limited to:

The Dagda was similar to other gods from various mythologies. He was similar to the Norse god Odin or the Roman god Dis Pater. That god later became intertwined with Hades, god of the underworld.

Origin of the Chief of the Gods

Like many other gods in Celtic mythology, Dagda had his own beginning. His origin story depends on the source you consult, and it wasn’t as exciting as some of the other gods. Some stories say that his parents’ names were Ethniu and Elatha. Or his father might have been named Badurn.

Those names aren’t as well-known as the god who was said to be perhaps his brother: King Nuada of the Silver Hand. He might have also had a brother named Oghma. King Nuada was the king of the gods, while Dagda was merely the “head” or chief. Their roles were similar, so some believe these three brothers could have been one, each name representing a different aspect.

But it’s more likely that the stories meant that King Nuada was his brother. They certainly acted like it, for in the myths, they are companions and advisors to one another. And at one point, the Dagda tricks King Nuada into getting his land at Brú na Bóinne.

Dagda married Morrigan, who was a triple goddess, similar to perhaps the Dagda himself. She was a war goddess, and her nickname was “The Phantom Queen.” He had many children, not all of them were from the union between Dagda and Morrigan, but the most famous ones are named Aengus, Brigid, and Midir, gods in their own right. While he had many affairs, one of his most famous was his love affair with Boann, the river goddess.

The Dagda, being the chief of the gods, was involved in many tales and myths in Celtic mythology. Some of them involve him tricking the other gods. This myth is very similar to the Norse god Odin’s personality as well.

Dagda and Boann, the River Goddess 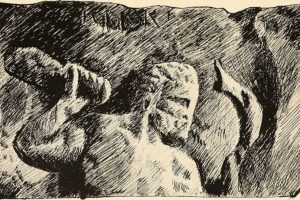 The Dagda was a flirtatious one, and his skills lured in Boann, the famed river goddess. However, the Dagda was married, and Boann was married to his maybe brother, King Nuada. They began their affair, and then they sent Nuada away on a trip so that they could be together without hiding it. During this time, Boann became pregnant, and when Nuada returned, she and the Dagda needed a way to hide it from him.

As a result, the Dagda, with his wisdom and magical ability, reached up into the sky and held onto the sun. He made the sun stay in one place for nine months so that Boann could have the baby in secret. It seemed like it had only been one day, and King Nuada would be none the wiser. Boann gave birth to Aengus, and they gave him away to Dagda’s son Midir to act as his foster father.

The Chief of the Gods and His Home

The Dagda lived at Brú na Bóinne with his family, and it is a grouping of mounds on the banks of the River Boyne in Ireland. It is far, far older than Stonehenge and the Pyramids, having been built around 3200 BC. One of the mounds is aligned with the sun during the winter solstice, and so it’s a perfect place for Dagda’s home. This place is perfect because he is the ruler of agriculture and can control the seasons with his harp.

The Dagda didn’t always live there, however. Originally, King Nuada and his wife Boann lived there. But once, when Dagda and his son, Aengus, were visiting King Nuada, they tricked him with a little wordplay. They asked if they could stay “a day and a night,” but they were using Old Irish, translating this phrase to “all days and nights.” King Nuada agreed to this unwittingly, and thus he gave up his home to the chief of gods and his family.

However, karma got involved when later, Dagda gave away his property before his death to all his children except Aengus. Aengus was away traveling at the time, but when he returned and saw what had happened, he used the same wordplay trick on his father. Dagda fell for it, and Aengus took Brú na Bóinne for himself.

Before the Tuatha dé Danann made their home in Ireland, they lived in lands where they developed their magic. But for whatever reason, they had to leave those lands, and they entered the Emerald Isle. But there were already two fearsome groups living there, the Firbolg and the Fomorians. First, they fought the Firbolg, but they struggled against them and were enslaved for a time.

But King Nuada got them out of it through clever trickery, and they knew that the Fomorians were next. Since Dagda was married to the Phantom Queen and war goddess, he also wanted to use her powers of prophecy. He met her at a river, and after they made love, she told him they would be victorious in battle, but at a price. Dagda went into battle feeling powerful, and they met the Fomorians in County Sligo.

However, during the battle, and even though they were victorious, both Dagda and King Nuada were severely injured. King Nuada died, and after the Dagda was taken back to his home, he died there. He was buried in one of the mounds, and even after his death, the gods returned there in order to get his advice.

Dagda had many symbols to his name. Each of the three sacred treasures that he carried around had its own incredible power. His treasures included:

The Dagda or Dagda is one of the most important gods in the Celtic pantheon, and his legacy is still remembered today in Ireland. Take a look at the list of most important points that we covered in this article: 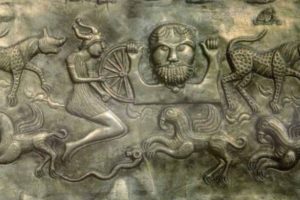 The Dagda was very similar to other chief gods such as Odin and Zeus, full of wisdom and trickery and not stingy with his affections. He had great power in the Celtic world, and yet he met his end like any man would on the battlefield. And yet, despite all his trickery, and the Christians trying to discredit him, he retained his place of honor, and he is still greatly remembered today. It would be hard to forget a god who had the ability to slay and heal and control both nature and man.