Danu: Mysteries of the Mother Goddess 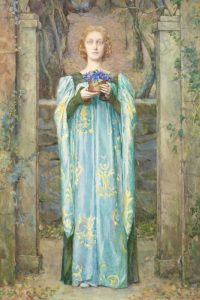 Danu, goddess of the Tuatha Dé Danann, is the original mother goddess in Celtic mythology. The very name Tuatha Dé Danann means “Children of Danu,” and it is believed that she was the beginning of the existence of the gods. However, her tales are shrouded in mystery, and there is not much said about her in the records. Read and learn what we know and try to piece together a story for the Celtic mother goddess.

Who Is Danu in Celtic Mythology?

According to scholars, Danu is the mother goddess in Celtic mythology. However, her name and any myths, including her, don’t often appear in the primary sources. They’ve been able to take bits and pieces from the information and string a bit of a story together for Danu, the Great Mother of Ireland. She is sometimes mentioned as the mother of certain gods and goddesses, such as Brigid. She is also connected to the chief of gods, the Dagda.

She was the source of the Celtic pantheon, and she is thought to be the one that imbued them with their knowledge, power, and nobility. Some say that she was the goddess who suckled each of the gods to provide them with their gifts. She gave noble gifts to the rulers in the pantheon, and they took their power from her, the original goddess. Without her, the gods could never have gotten their start.

She was likely considered an elemental goddess such as wind, water, or earth, according to our information. She could have been more like an element rather than a goddess similar to other mythologies. All we really know is that she was considered an ancestral mother to the gods. The Tuatha Dé Danann moved from their mystical lands to Ireland, and since she didn’t appear in Irish myths, she likely didn’t travel with them.

The Etymology of Danu

The name Tuatha Dé Danann, the Celtic or Irish pantheon of gods, means “Children of Danu” or “Peoples of Danu.” It is part of what led scholars to piece together bits of her story. The name Danu could have come from a few possible origins:

So much about Danu is up for debate and covered in mystery, and I suppose we’ll never know. However, according to what we do know, all of these words fit with the goddess.

Sites Connected to the Great Mother

There are possible links to Danu on several sites, and one of them might be a little strange. The Tuatha Dé Danann is closely linked to Ireland, but some of her sites are in other areas. Moreover, the Celtic world was more vast than Ireland and actually spread farther east. She has a connection, possibly, to the Danube River, which runs through Europe and not Ireland.

She also has a spot in County Kerry, Ireland, where two mounds or hills are positioned close together. These are called the Da Chich Anu/Annan or the Paps of Anu. These were thought to be the breasts of the Mother Goddess, who might also have been called Anu/Annan. This formation is one reason for scholars to think of her as an earth goddess and a fertility goddess.

Over time, and despite lacking information, she is connected to water and thought of as a water goddess today in Ireland. She is the goddess of water and waterways.

The Mythology of the Mysterious Danu

Sadly, there aren’t really many myths connected with Danu. Scholars have tried to put things together, and they’ve found connections to other world goddesses, which we’ll get into later.

– Danu and Her Lovers

One of the stories connected with Danu is her and Bile, who was the god of both healing and light. They might have been married or lovers, but some sources suggest that these deities had the Dagda. The Dagda later became chief of the gods and had many of his own children. However, other sources imply that Dagda and Danu were lovers and had children together; it’s unclear.

She was the mother of many gods and goddesses or all the original ones. But there are a few more famous ones that we can mention by name. She was the mother of Nuada, who later became king and Ogma, a strong war-like god, and Dian Cécht, the healer of the Tuatha Dé Danann.

– When the Gods Left

Another story that includes Danu is when the Tuatha Dé Danann left their lands and moved to Ireland. The Tuatha Dé Danann lived in mystical lands to the west or the north, depending on the myth you read. It was perhaps something like the Christian Heaven, and Danu, of course, resided there with them. But for many reasons, they needed to leave their ancestral home and seek another safe place to settle.

Danu helped prepare them for their journey and provided them with the powers that she was known for, but there is another version of this story. It says that the Tuatha Dé Danann had been living in Ireland but were exiled. They were scattered throughout the world, and Danu took pity on them, collected them, and taught them their powers.

There, she acted out her motherly role and helped her children find their new place in the world. Their place later became Ireland. But a different tale suggests that the gods were more like god-like creatures who had powers that helped them earn Ireland. They might have later become the mystical creatures of Ireland like fairies and leprechauns in the latter days of the Emerald Isle. 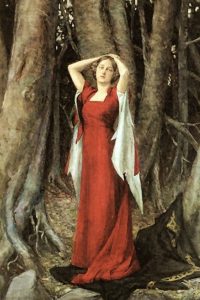 Neopaganism is a modern religious belief system based on the historical pagan beliefs of old. Just like the pagan beliefs in Celtic mythology, nature was sacred and powerful, and the gods controlled old. In Neopaganism, Danu, the Mother Goddess, has also been revived as well as the others. By those who practice neopaganism, she is worshipped as a mother and giver of life.

However, she is also looked at as an Irish triple goddess. This similarity is not an unusual image in Irish or Celtic mythology. Moreover, she has three aspects: the beautiful maiden, the mother, or the hag/crone. These aspects are very similar to the triple goddess, the Morrígan, but Danu is mostly seen as the mother aspect of the trinity here.

Danu and Other Goddesses

Because there wasn’t much information in Celtic myths about Danu, scholars looked elsewhere to try to learn more. There are similarities between her and other goddesses in world mythologies:

Danu’s name is found in a few media. She can be found in:

Because she is a mother goddess and an elemental goddess, she has many symbols linked to her name. These are water, earth, wind, gold, amber, animals such as horses, seagulls, and fish.

What to Do With a Lack of Info

We don’t know much about Danu, but that doesn’t necessarily mean we can’t take things from her story. Studying mythology is a way we can understand the past and the thought processes and way of life of ancient peoples. From Danu, we can take the fact that origin stories are so important to people groups. And even though she was a goddess who begat other deities, it still gave the Celtic/Irish people their start.

Danu, a Celtic goddess, was all-encompassing in Celtic mythology, but even though she is shrouded in mystery, there is much we can learn from her. Check out these main points that were covered in the article: 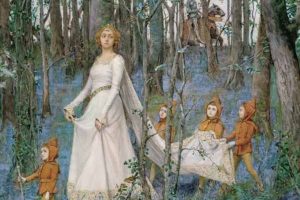 Even though she held a pivotal role in Celtic mythology, Danu’s “life” and times are a mystery to us. However, that doesn’t make sense: if she was so important to the Celtic peoples, why didn’t she work on her survival? Perhaps, wires were crossed over time, and she was inspired by the mother goddess of a different people group, and they are the ones with more information about her. Whatever the reason is, people see her as a very positive, loving, and helpful figure, the origin of life, just like a mother.