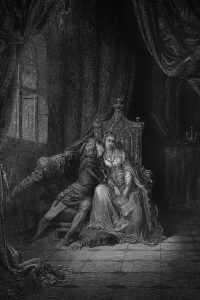 Queen Medb is the Queen of Connacht in Celtic mythology. Connacht covers multiple counties in Western Ireland, and Queen Medb ruled over this area. She was a villainous woman, and her charms and power laid in her allure and ability to control. Read on to discover how she used her warriors to steal a prized bull and how she died by cheese.

Who Is Medb in Celtic Mythology?

Queen Medb’s name is from the Irish word, “Meadhbh,” which aptly translates to “she who intoxicates.” The later English version of her name is something more like Maeve or Mave. Queen Medb was a beautiful and powerful queen, and she was far superior in every way to all her husbands and lovers. She was like another Irish goddess, who was the goddess of sovereignty, meaning they may be the same character.

Her stories come mainly from the Ulster Cycle, a collection of old Irish myths and epic tales. Her most famous stories have to do with finding revenge on her first husband, Conchobar, and the battle for the prized bull of Ulster. In some stories, she was described as having fair hair. She was so beautiful that warriors lost two-thirds of their valor once they laid their eyes upon her.

She had many lovers and suitors throughout her life, and strangely, she asked three things of each of them. She asked that they never feel fear, meanness, or jealousy against her. Perhaps that was because she was very conscious of her personal gifts as well as her superiority to all the men she came in contact with. In the myths of Queen Medb, we as readers can see a powerful, independent woman who knew just what she wanted and how to get it.

The Origin of Medb, Goddess or Queen

Medb was part of the myths, and she ruled as a queen. She might have even been considered a kind of goddess in Celtic mythology. However, she had a human beginning. Her father was Eochu Feidlech, one of the High Kings of Ireland, and her mother was named Cloithfinn.

She had multiple siblings, which included five brothers and four sisters.

Myths of Queen Medb of Connacht

It’s only natural that trickery and bloodshed go with the tales of a strong woman in mythology. Queen Medb wanted to live the life she pleased, and she used what she could to get it. In some ways, that worked well for her, but in the end, her own former tricks brought about her demise.

Once she was old enough, Medb was first married off to King Conchobar mac Nessa, who was the King of Ulster. Her father wished her to make this match because he had killed Conchobar’s father in battle and wished to make some sort of amends. Conchobar agreed, and Medb became his wife, and she gave birth to a son named Glaisne. But as so often happens in these kinds of stories, the marriage was not a good one.

They quarreled often, and Medb chose to leave him. In her place, her father Eochu decided to offer Cochobar another one of his daughters to marry. He chose Eithne, one of Medb’s sisters. But surprisingly, Medb eventually murdered her own sister, who was in her final stages of pregnancy at the time.

Likely this was done to spite her father, ex-husband. It could also have been to show her displeasure that her sister had married her former husband. Despite the mother being slain, the child named Furbaide lived and was born by C-section.

– Medb Ascends to a New Throne

After the debacle with her first husband and sister, Medb’s father, Eochu, removed the king of Connacht from his throne. He offered it to Medb instead, and she took it happily. But the former king of Connacht, Tinni mac Conri, still lived, and he and Medb became lovers to keep the peace in Connacht. Because of his connection to Medb, he gained back some of his power.

But things took a turn for the worse when the kings of Ireland met at Tara, the “inauguration” place of High Kings. There, Medb met Conchobar again, and he raped her, supposedly in revenge for her murder of her sister. After that, her lover, Tinni, called Conchobar to task and offered to fight him as a matter of honor. They fought, and Tinni lost, thus preventing a war between Connacht and Ulster.

Medb was now Queen of Connacht and standing on the throne alone, but there had been a rival to Tinni’s kingship. His name was Eochaid Dála. During the battle that was to come after Tinni and Conchobar fought, he protected the Connacht army as it retreated from the Ulster one. Medb decided to take him as her second husband, and they ruled together. However, this was when she began requesting that her husbands and lovers not feel fear, meanness, or jealousy towards her.

Furthermore, things hadn’t been working out well so far with her first husband or second relationship (Tinni.) Of course, Eochaid agreed, but after she married him, she took his head bodyguard, Ailill mac Máta, as her lover. And Eochaid was furious as well as jealous.

He challenged this man to a duel just like Conchobar and Tinni, and he lost against him. After his death, Medb took Ailill mac Máta as her third husband.He became the third king of Connacht in connection with Queen Medb. 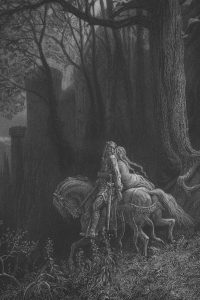 Medb first had a son named Glaisne with Conchobar. Then with Ailill, she had eight children: seven sons and one daughter. Their names were:

She asked a druid which of her sons would kill her ex-husband Conchobar. She was still hoping to take revenge against him. The druid said that her son Maine would be the one to do it. Confused, since she didn’t have a son named that, she changed all their names to a variation of Maine.

In the end, her son Eochaid ended up killing a man named Conchobar. He fulfilled the prophecy, but it wasn’t her first husband whom he killed.

Queen Medb was used to being superior in every way. It was especially true if she was competing against one of her husbands. When her then-husband Ailill gained a prized bull, she wanted to find one of her own. However, there was only one other bull that even came close, which was owned by a man in Ulster.

Its name was Donn Cúailnge. So, Medb hurried there and offered to buy it from him, but he refused. He didn’t want to part with his valuable property, and so Medb, in a rage, gathered her army to fight against Ulster. The Ulster army was led by a famed young and beautiful warrior named Cú Chulainn.

Medb was ready to do whatever was necessary to get this bull, and so she and her men crossed the border into Ulster. However, Cú Chulainn was no ordinary warrior, and he had the strength of many men. Somehow, as Medb stepped into Ulster, a curse was put on the Ulster warriors. It depends on the myth, but they either suffered from birthing pains or menstrual cramps and couldn’t fight.

Cú Chulainn, however, was unaffected. He was able to take on her men in single combat while he stood at the fords. After three days of battle, the curse of the cramps ended, and Medb began to have menstrual pains of her own. A battle began between Ulster and Connacht, but Medb ordered a retreat.

While she was retreating, she came across Cú Chulainn. He held a weapon to her throat when he found her, but he eventually relented, knowing that she was having her period. But that later would prove to be a mistake because he died in another battle against Medb’s army.

How Did Medb Die?: Her Death by Cheese

Things for Queen Medb were always tumultuous, and even though she had a long marriage, Ailill was fed up with her lovers. He killed one of them, and Medb was furious. The warrior Cú Chulainn’s brother Conall came to live with Queen Medb. It’s unclear whether they were lovers too.

They both caught Ailill having sex with one of Conall’s lovers, and Queen Medb asked Conall to kill Ailill for her. He did so, but he was later killed by Ailill’s men. Then, it was soon time for Queen Medb to meet her end. One day, she was bathing outdoors, and her very own nephew, Furbaide, killed her.

He wanted revenge for his mother Eithne’s death. While watching her, he put a piece of cheese in a slingshot and hit Medb so hard that she died. One of her sons buried her in a plot that faced her great enemy, the people of Ulster. It’s just sad that such a powerful woman had to become a victim of death by cheese.

There are a few locations in Ireland named after Queen Medb or Maeve/Mave, and they are:

Most of these places are located in Connacht.

Take a look at the main points about Queen Medb covered in the above article: 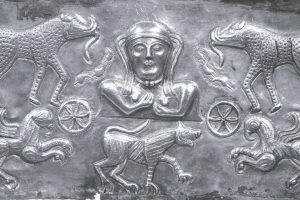 It’s not unusual that when we read about powerful women in mythology, they are often paired with negative adjectives like cunning. However, Queen Medb was a powerful woman for her time, and she wanted to live life as she liked to live it. She didn’t even need to murder her jealous husbands. They took care of that well enough themselves, but all her trickery ended up killing her in the end, in a strange way, no less, and that is undoubtedly karma.