Taliesin: Myth of the Beautiful Bard 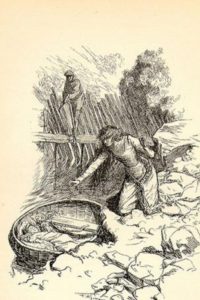 Taliesin, poet, and bard, is the famed Welsh advisor and “entertainer” to the kings of yore. It’s not clear whether Taliesin was a myth, but there was a real Taliesin who lived during the 6th century. He was beautiful, prophetic, and poetic, and he had a long and successful career. Learn more about how Taliesin found his beginning, and he made his mark on the Celtic world here.

Who Is Taliesin in Celtic Mythology?

According to the records, Taliesin was likely a real man. He had myths, and stories told about him, nearly elevating him to mythical status. His name in Welsh means “radiant brow,” which suited him because he was said to have great beauty. His beauty came from the white witch Ceridwen who endowed him with the powers of Awan.

Not only was he beautiful, but he could also look into the future, so he was an advisor of kings. Many kings of great courts sought him out as an advisor. He had offers from the Briton, Saxon, and Roman courts, asking if he would come and provide his services as prophesier and advisor. In his time, he served three British kings, and he even served King Arthur.

That’s why there is some curiosity about whether Taliesin was actually Merlin or if Merlin inspired him. They both had magical powers to some extent. Some scholars believe they were the same person and might even use the names interchangeably. Either way, he traveled alongside famed kings.

He also acted as both their companion and advisor. He has gone down in history as the chief of bards.

Taliesin’s Origin: The Bard and His Beginning

Taliesin had a strange beginning, and it had everything to do with magic if we’re to believe the story, “The Tale of Taliesin.” Before Taliesin became Taliesin, he was somebody else, and his name was Gwion Bach ap Gwreang. The white witch Ceridwen could create a special potion that would give others both beauty and the power of prophecy. But the potion would take a long time to brew, and Ceridwen needed help to guard it while she went about her business.

Gwion got lucky, and while he was stirring the cauldron, he got three drops on his thumb. They burned him, so he put the thumb in his mouth to cool it down, and then he was gifted with Awan. That is the Welsh term for poetic inspiration. Ceridwen found out what had happened, and she dropped everything and chased after the young man she’d trusted to help her, and Taliesin was born.

The Magical Chase, Ending in Rebirth

Now that Gwion could perform magic, he could hide from the witch by changing himself into different animals as he ran. She found him at each turn, and he needed to think of a brilliant solution. In the last effort to escape her, he turned himself into a piece of grain, and Ceridwen ended up eating him. After that, Ceridwen became pregnant with Gwion himself!

When she had the child, she couldn’t find it in her heart to be angry at him anymore. And he was so beautiful, but she didn’t keep him. She gave him to be fostered by the lord of Ceredigion, Elfin. His father named the boy Taliesin and raised him as his son.

Taliesin’s Myth: First Prophecy and Beyond

One of Taliesin’s stories involves his first prophecy, and it, unfortunately, wasn’t for the better for the recipient. Taliesin’s father, Elfin, took him along on a trip to visit Elfin’s rival, the King of the Britons. High King Maelgwn Gwynned had to be the first recipient of Taliesin’s prophetic ability. During the man’s court visit, Taliesin told the king that he would eventually die of Yellow Fever instead of dying in battle.

King Maelgyn Gwynned did die of Yellow Fever just as Taliesin predicted, and thus Taliesin’s fame grew. He became more and more well-known as time went on. He advised his foster father, and then he worked for various kings over time. In certain tales, such as “Culhwch” and “Olwen,” he worked as a bard in King Arthur’s Court.

He traveled with the king, acted as his companion, magician, and advisor. He played many roles, similar to the famed Merlin in the stories of King Arthur. Stories of Taliesin’s involvement with King Arthur emerged around the 11th century. 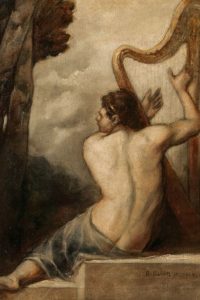 Taliesin, bard, and advisor, was also a historical figure who lived in the 6th century. Many poems are stories that credit him as an author, but scholars cannot be sure that he was the actual author. After he lived, so many things became mixed with the legend that we can’t totally figure out who was who. There was even a “Book of Taliesin” called “Llyfr Taliesin” in Welsh, written around the 14th century.

However, he was already almost a mythical figure by then. There was an ancient Welsh historian named Iolo Morganwg who added a bit more confusion to the mix. In the 18th century, he worked on collecting ancient documents about Taliesin. The tales were so surprising in many ways, and they gained popularity.

But later, in the 19th century, these tales proved to be all made up. So not only did Iolo Morganwg lose his reputation but as a result, Taliesin did as well.

Taliesin’s history was very like that of the mythical and mystical Merlin, but in reality, they also had many differences. Perhaps some people use their names interchangeably. And in myths, they were often confused, but they are more often thought of as two separate beings. Merlin was advisor and magician to King Arthur, as was perhaps Taliesin.

They both had the abilities of wisdom, magic, and prophesy.

However, even though Taliesin had a magical background and myth to his name, he was also connected to history and a historical figure. Merlin was a druid and like a half-demon, and he was far more of the fantasy world than his counterpart. There is also some comparison made between Taliesin and Lugh of the Long-Arm.

He was a wise god who was part of King Nuada of the Silver Hand’s court who later became king of the gods. He was older than Taliesin, so some scholars believe he might have inspired some of Taliesin’s more mystical history.

Taliesin is one of the better-known names in the Celtic mythology world. And he didn’t even really reach godlike status.

Taliesin was the most well-known bard in Welsh history. His name became so connected with that of the historical figure that it’s hard to disconnect his real self from his magical, mythical self. But we’ve tried to cover the details as best we can. Take a look at the list of points we’ve gone through in this article: 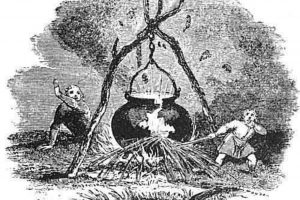 Taliesin was similar to other characters in world mythology; he was likely a real man whose skills were so legendary that they turned him into a legend. His story became mixed with that of the ancient Celts and their magic. He had such power and such beauty that it was no wonder he became like an almost god to the Celts. But both characters, whether real or mystical, had a lowly start, and they built themselves up to what they became: powerful and memorable.