Taranis: The Forgotten Male Triad of the Celts 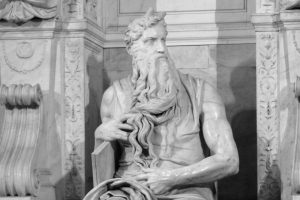 Taranis may have been one of the most important and widely worshipped deities in Bronze Age Europe.

However, no myths about Taranis have survived to the present day.

What do we actually know about this Celtic god of weather?

Keep reading to find out!

Who Is Taranis in Celtic Mythology?

Taranis is the god of storm, weather, sky, and fire, and he was worshipped by the Celts, who were spread across much of Europe during the Bronze age. Celtic tribes in Gaul, the regions near the Danube River and the Rhine River, the Iberian Peninsula, Brittany, Britain, and Ireland all worshipped similar gods.

Taranis was known to them all, so he was likely a significant deity. Seven altars to Taranis still exist in Europe, Britain, Germany, France, and Serbia.

In the proto-Celtic languages of Europe, Taranis means “thunder.” Taranis was often called the Celtic god of thunder and lightning, and his attributes were similar to other Eurasian storm gods, such as Thor, Perun, and Yahweh. Because the Romans were the first to record information about Taranis, he is most closely compared with Rome’s sky god, Jupiter.

One bronze figurine exists as a physical representation of Taranis. Found in Le Chatelet, France, it dates to around the Second Century BCE. Much like Jupiter, he appears as a vigorous, bearded man, carrying a lightning bolt in his right hand, with a spoked wheel sitting on his left. With the inclusion of the spoked wheel, archaeologists could conclude that the figurine was of Taranis rather than Jupiter.

Historians speculate that Taranis may have been a leader among the gods of the Celtic pantheon. However, he also had his faults. Like Jupiter, Taranis was unpredictable, like a storm. He also lost his temper quickly and often resorted to violence.

How Do We Know About Taranis? The Forgotten Male Triad of the Celts

During the Bronze Age, the Celts did not have a formalized written language, so the only written record of Taranis’s name comes from Rome. In the First Century CE, the Roman poet Lucan mentions the Celts of Gaul and their religion.

Specifically, he mentioned a group of three dominant gods: Taranis, Esus, and Teutates. To Lucan, Taranis aligned with Jupiter, Teutates resembled Mars, and Esus was similar to Mercury.

Though Lucan didn’t record any myths or personal details about Taranis or the triad, he commented on the Celt’s methods of worshipping them. According to Lucan, these three gods were notorious in Europe for requiring human sacrifices:

“Ligurian tribes, now shorn, in ancient days
First of the long-haired nations, on whose necks
Once flowed the auburn locks in pride supreme;
And those who pacify with blood accursed
Savage Teutates, Esus’ horrid shrines,
And Taranis’ altars cruel as were those
Loved by Diana, goddess of the north;
All these now rest in peace.”

Teutates received human sacrifices by drowning, and Esus’ victims were hanged and dismembered. Since Taranis was associated with fire, some sources believe that the cult of Taranis began the tradition of the “wicker man.” In this tradition, the tribe would weave a giant statue made of thin wood, place thieves or criminals inside, and set it on fire.

Taranis Symbol: What Is It? 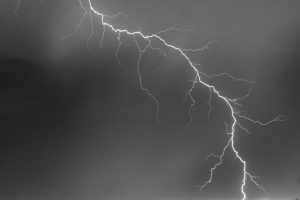 Though Taranis has several symbols, the most important symbols by far were the lightning bolt and the spoked wheel. Other symbols associated with Taranis are chariots, clouds, bulls, eagles, and various weapons of war.

Taranis is often known as the Celtic lightning god because he carries a lightning bolt, hurling it from his chariot like a spear.

In Britain, Taranis was worshipped by a pre-Celtic tribe called the Picts, and their carvings feature a lightning bolt more than any other symbol.

– The Wheel, Taranis’ Most Recognized Symbol

The spoked wheel was an important symbol to many ancient religions, but the Celts associated the wheel specifically with Taranis. This symbol appears on numerous coins, amulets, and other artifacts from Celtic Europe.

Archaeologists can differentiate artifacts of Taranis and those of other sky gods by the presence of the wheel. One of the most famous images depicting Taranis and his wheel occurs on the Gundestrup cauldron, which likely originated around the First Century BCE around present-day Serbia.

In practical terms, the spoked wheel represented a chariot for the ancient Celts. Like many of his peers in other religions, Taranis rode a chariot across the sky, hurling his lightning bolts as needed. The Celts imagined that thunder was the telltale rumble of Taranis’ chariot rolling by. Also, the chariot wheel became associated with the disc of the sun.

Taranis’ wheel was mainly associated with thunder or the solar disc, but to the Celts, it also represented the abstract concept of the “wheel of the year.” The earliest usages of the wheel displayed only four spokes, representing the solstices and equinoxes that were their primary sacred days.

Later, they added the four fire festivals of Imbolc, Beltane, Lughnasadh, and Samhain, giving the wheel its recognizable eight spokes.

No myths survive to tell about the Celtic sky god under the name of Taranis. However, in Ireland, Taranis is known as Tuireann, and a piece of his lore is recorded in the story cycle called The Three Sorrowful Tales of Erin.

Tuireann appears in the story called The Tragedy of the Sons of Tuireann. In this story, three of Tuireann’s sons – Brian, Iuchar, and Iucharba set out to kill their father’s arch-enemy, Cian.

Knowing the brothers were at his heels, Cian waved his druidic wand and shapeshifted into a pig to hide among the herd. Brian transformed Iuchar and Iucharba into hounds, and they were able to sniff out their prey.

The three sons of Tuireann killed Cian and tried to bury his body, but the earth rejected it six times before finally accepting it on the seventh attempt. Cian’s son, Lugh, went to Tara and appeared in the hall of the Tuatha de Danann to demand the “erec,” or blood-fine, from his father’s murderers. For the erec, he required three apples, a pigskin, a spear, a chariot with two horses, seven pigs, a newborn hound, and three shouts on a hill.

Tuireann’s sons were suspicious, but they had no choice but to accept the erec. Lugh then told them the apples must come from the sacred trees in the Hesperides, the exact task set for the Roman hero, Hercules. All of the tasks were equally monumental, and Lugh expected the brothers not to survive the attempt.

The brothers did succeed, often using brute strength and trickery, but all three were mortally wounded during the seventh task. They returned to Erin, and Tuireann himself went to Lugh to beg him to heal his sons.

Lugh refused, cementing his revenge for Cian’s death. Tuireann sang a funeral song over himself and his sons, and he lay down and joined them in death. 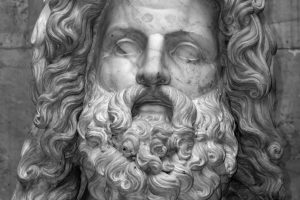 Taranis was one of the most important gods of the Bronze Age, but we know very little about him. Here are a few things we do know about Taranis:

Taranis might have been completely forgotten or absorbed into the mythology of Jupiter. Thanks to the writings of Lucan, we can still get a glimpse into the world of the Celts and also Taranis, their revered sky god.