Chinese Gods: Creators of the Orient 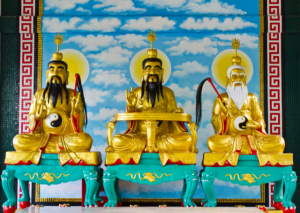 In this article, discover the stories and history of the Chinese gods and goddesses. Chinese mythology is spellbinding, mixed with a bit of magic, mystery, and stories of the beginning of the world.

Learn more about the ancient Chinese gods and goddesses below.

Sun Wukong is also known as the monkey god, and he has the body and face of a monkey. His name translates to “monkey awakened by the emptiness.” He is a trickster god with a short temper, so he often got into scrapes. He has superhuman strength, and each of his hairs has the power to transform.

He can change into 72 different animals, and he can also use his powers to manipulate wind, fire, and water. He is one of the most well-known characters in Chinese lore. He was the main character in the famous novel “Journey to the West.”

Nezha is a young teenage god who used his strength to protect young people. He had superhuman strength because he lived in his mother’s womb for three years and six months. His story was adapted from the Hindu god Nalakuvara’s myth.

Guanyin is the goddess of mercy and is both all-seeing and all-hearing. She is the mystical embodiment of compassion. Moreover, this goddess was the one called upon during times of difficulty and uncertainty. She can take the form of either male or female, but she is portrayed as female most of the time.

Dragon King’s Chinese name is LongWang, and he is a guardian deity. He is the lord of the seas, and he is the protector of all life in the sea. He also controls the weather. He is the god of good fortune, and Chinese cities along the coastline popularly worshipped him.

Chang’e is the goddess of the moon, and she is worshipped during the Mid-Autumn Festival. Her name means “pretty young woman,” and she is married to Hou Yi, a famous archer. Her greatest story involves her stealing an elixir of immortality from her very famous husband.

Pangu is an ancient Chinese god, and he was considered to be the very first god. Similar to other mythologies, at the beginning of time, he was born out of an egg. When he was born, he brought out the whole universe with him. Afterwards, he created the earth and the sky.

He was a horned and hairy beast. His name means “ancient coil,” likely because of the curled-up position he assumed while waiting in the egg.

The Jade Emperor is one of the most important Chinese gods, and he was the very first Chinese emperor. He was also considered to be the supreme ruler of Heaven, and he was a Taoist god. The Jade Emperor still holds a place of importance in Chinese culture. Each year at Chinese New Year, many believe that he is the god who weighs each person and judges their character throughout the past year.

Erlang Shen is an all-seeing god, god of engineering, as well as a mighty warrior god. He could see everything because of his all-seeing eye in the middle of his forehead. He also had the power to calm floods. Like Sun Wukong, he is a character in the famous book “Journey to the West.”

Nuwa is a creator goddess, known by her other name, Empress Wa. She was considered a mother goddess because she was the mother of all creation. Furthermore, she is a very respected goddess with sometimes the face of a woman and a snake body. Other times, she’s just portrayed as a woman.

Zhong Kui is a powerful god and folk hero who can fight ghosts, and he was known as a demon hunter. During his life, he had a horrible-looking appearance, and because of this, he committed suicide. Once he was in the afterlife, he earned superpowers. Not only did he fight ghosts and demons, but he also commanded an army of them, numbering around 80,000.

This god was the most legendary archer of all time in Chinese folklore. His bow was made from tiger bone, and his arrows were made from dragon tendons. He used to be immortal, living with the Jade Emperor, but he later became mortal to help humans. He married the moon goddess, Chang’e, who later stole an elixir of immortality from him.

This god has multiple names, from Yam to Yamla to King of Hell and King Yan. He was based on a Hindu god, but he became assimilated into Buddhism later. He is the god of death and has a big, red face, a long beard, and big, bulging eyes. His face appears on hell money, which the Chinese will use to offer as burnt offerings for the dead. 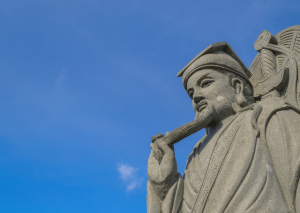 Mazu is the goddess of the sea, and she is the protector of fishermen, sailors, and travelers. Coastal cities often worshipped and revered her. You might often find shrines to her in those areas. People would call her out during urgent times, but she prefers to be called by one of her more informal names.

Caishen is considered the god of wealth and money. He is especially worshipped during Chinese New Year. People are hoping that he’ll be generous with them in the coming year. In mythology, Caishen would carry around a tool that could turn iron and stone into gold.

Shennong is the god of agriculture, seeds, and irrigation. He is credited with the invention of farming techniques, and many believe that he is the father of Chinese traditional medicine. He also invented the ax, the well, and the hoe. He had a detailed book of 365 traditional medicines.

Leizi, or Dianmu, is the Chinese goddess of lightning. Her husband, Lei Gong, is the god of thunder. Together they create storms along with the rain god. She uses mirrors to cast light around the earth, while her husband uses drums to create the sound of thunder.

Fuxi is one of Chinese mythology’s most famous and powerful gods. He invented the writing system, fishing, and domesticating animals. He is the first male ancestor of China, and he is a generous and kind god. In art, like his sister Nuwa, he is sometimes portrayed with a human head and a body of a snake.

Lu-Ban was a mortal, but he achieved god status after his death. He was the god of carpentry and architecture. He is the patron saint of builders, and he invented many things such as the saw, the cloud ladder, and the shovel. He might have been more like a folk hero as opposed to an actual deity.

The Eight Immortals are a group of legendary beings in Chinese mythology. They each have their own unique power. This power can be transferred to an object, and it can be used for good or ill. They are Taoist deities and are said to have lived on a group of islands.

Huxian is a fox goddess or fairy. She was most popularly known in Northern China. She was almost like a trickster goddess because she could transform herself into a human or an animal. She liked to rick wealthy people into living a life of pleasure and greed. Her most common form is a nine-tailed fox, still a well-known image today.

This goddess was named the Queen Mother of the West, and she was married to the Jade Emperor. She is an ancient goddess, and she tended to the Peaches of Immorality in the palace gardens.

This god is the god of literature, and he was popular among students. He is the god that students and other learned people call upon whenever they are stuck. He helps them with problems like writer’s block or hurrying to study for exams. In art, he is shown as a gentle, old, professor-like man.

Cangjie is another Chinese god who is given credit for developing the Chinese writing system. He served as the official historian for the Yellow Emperor. Strangely enough, he had four eyes. The extra eyes would help him to be a better observer of the natural world.

He would be able to see things that ordinary people couldn’t see. In later stories, it was said that he used his eyes to determine truth from lies.

Yue Lao is the Chinese god of both love and marriage. He appears to people underneath the moonlight. Additionally, Yue Lao is an old man with a long white beard, yellow robes, and a smile. He brings a red thread or tie with him because that’s his way of tying together two people for marriage.

Jiutian Xuannu is the goddess of sex, war, and longevity. She has many magical powers, one of which includes the ability to make herself invisible. Her name means “mysterious woman.” This goddess can also call certain stars to her aid to act as warriors whenever China needs her. 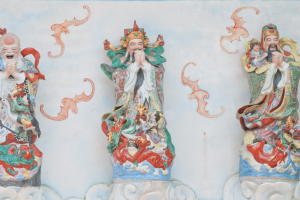 The Chinese deities each have their own unique power and story. The amazing thing is that some of them started out as mortals but achieved their god or hero status only after death. In addition, many also invented material things we use today! Talk about a mighty pantheon.