Cashien: The Chinese God of Money Who Blesses His Worshipers with Wealth and Prosperity

In this in-depth bio, you will learn who Caishen is, his history, and the many myths credited to his name.

Caishen is the Chinese god of money and wealth. As the lord of money, Caishen bestows good luck and fortune to anyone he wishes. He holds a prominent place in the faith and practices of his adherents during Chinese New Year celebrations, as people curry his favor wishing to see the upcoming year blessed with wealth and success. And as the god of money, Caishen also blesses his followers with protection from financial disasters.

Caishen is believed to have the ability to create gold out of ordinary items such as stone, iron, and in later myths, lead. Due to this, Caishen is often referred to as the Chinese alchemist.

More than just the god of wealth, Caishen is considered by many of his devotees to be the most powerful of all of China’s great pantheon of gods. Even the Buddha recognized Caishen as the supreme lord of wealth and prosperity, and as such, Caishen is honored across multiple religions throughout the world.

Often depicted wearing the traditionally decorated red robes of a civil servant with a minister’s hat, Caishen is considered convivial and pleasant. As the Chinese god of wealth and prosperity, Caishen is accompanied by a great number of attendants who carry gold ingots, important scrolls with royal decrees, fruits, and sumptuous foods.

He is sometimes found astride his favorite black tiger, holding a Ri Yu scepter in one hand and gold nugget in the other.

Who is Caishen in Chinese mythology?

Caishen, also called Ts’ai Shen, Cai Shen, or Cai Boxing Jun, has incarnated as nine different historic figures through the centuries, each incarnation revealing a different part of his multi-faceted personality. As the Chinese god of money, Caishen’s incarnations often use their abilities to create riches and prosperity for those in their care. But in some cases, Caishen’s incarnations erase the blessings of those that wrong them.

Caishen’s first incarnation was believed to occur during the early Shang Dynasty as a royal advisor named Bi Gan. More than just a court attendant, Bi Gan was a favored and wealthy prince, the son of King Wen Ding.

However, it was Bi Gan’s nephew, Zhou Xin, who sat on the throne. Known for being corrupt, Zhou Xin tired of Bi Gan’s attempts to correct his evil decrees. In a fit of anger, Zhou ordered that Bi Gan’s heart be extracted to see “whether the Sage’s heart has seven openings.”

Bi Gan’s wife and children escaped the palace, but Bi Gan was not so lucky. After Bi Gan’s execution the prosperity of the kingdom crashed down, marking the eventual collapse of not only Zhou Xin’s corrupt rule, but of the entire Shang Dynasty. 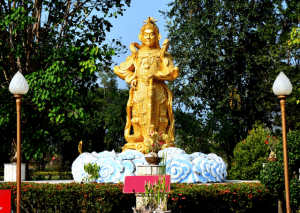 Another legend, written during the Ming Dynasty and entitled Fengshen Yanyi, relates the story of a hermit named Zhao Gongming. As the 12th century BC Shang Dynasty hangs upon the verge of collapse, Zhao Gongming comes into great magic and uses his powers to support the kingdom.

Seeking to fight against the hermit’s magic with magic of his own, Jiang Ziya, an adherent of the rival Zhou Dynasty, made a straw replica of Zhoa Gongming. After nearly a month of meditation and spell work, Ziya fashioned an arrow made from a sacred peach tree, and with a prayer to the gods, fired it into the heart of Gongming’s replica.

In that moment, the hermit Zhoa Gongming became ill and collapsed dead. After visiting a nearby temple, Jiang Ziya was confronted for causing the death of a man of truth and integrity. Ziya was ordered to carry the body of Gongming to the temple of Yuan Shi and forced to repent of his crime.

In the name of the god of the temple, Ziya spoke of Zhao Gongming’s honor and canonized him as Caishen, titling him President of the Ministry of Wealth.

During the time of Confucius, Caishen came to be associated with a military strategist and businessman named Fan Li. Fan Li was the advisor to the King of Yue, Goujian.

During Goujian’s rule, both Fan Li and the king were taken hostage by the enemy state of Wu, where they were imprisoned for three years. After their time in captivity, Fan Li served Goujian faithfully, carrying out reforms and governmental appointments that greatly improved the Yue state.

In 493 BC, Fan Li’s reforms enabled Goujian to topple the Wu government, and after his victory, Fan Li resigned his appointment and renamed himself Tao Zhu Gong.

After retirement, Fan Li and his love, Xi Shi (one of the Four Beauties of ancient China), lived upon a small fishing boat upon Lake Tai. Due to his success in business and his many prosperous governmental reforms, Fan Li was soon recognized and worshipped as the incarnation of Caishen.

In the 300 years between 618 to 907, in the time of the Tang Dynasty, stories began to spread of Li Guizu. Born in the Zichaun area of the Shangdon Province, Li Guizu served as a country magistrate.

During his service, he brought untold riches to the region through his creative legislation, making the district one of the wealthiest regions of Empire.

After his death, the people built a temple in his honor, and began to worship him as a deity. Soon thereafter, the Wude Emperor officially proclaimed Li Guizu as the god of wealth, forever joining him to the mythos of Caishen.

The Worship of Caishen

As an object of veneration, Caishen is one of the most popular Chinese deities. He is so necessary to receive financial blessing that he is believed to be at the ends and center of all compass points.

During the beginnings of communist rule in China, the new Chinese government of Mao Tse Tung sought to eliminate the people’s need for gods. The god Cashien was one of the government’s primary targets, and soon temples across China were bulldozed and destroyed. Yet, beginning in 1979 when mainland China begin to reopen to western-styled cultures, such as those from Taiwan, Singapore, South Korea, and Hong Kong, the worship Cashien made a grand return.

While mainland China had abandoned Cashien and found itself mired in poverty conditions, the surrounding cultures had kept their belief in Cashien alive and were thriving. The people of China, feeling as if they were under a curse for abandoning the god of prosperity, quickly turned back to worship of Cashien.

Within a few short years, temples were rebuilt across the country to the Chinese god of wealth and prosperity. Shrines and statues were seemingly erected overnight, and in the early 2000s, the largest temple of Cbaishen was built and dedicated in Xi’an, Shaanxi.

During China’s two-week New Year celebration, the fifth day of the first lunar month is now dedicated to Caishen, a god so popular that even Mao Tse Tung’s government could not destroy him. Incense is burned throughout the country in Caishen’s temples, and both strangers and friends exchange the traditional greeting – gongxi facia “may you become rich.”

The Chinese god of wealth and prosperity

Cashien, the Chinese god of wealth and prosperity, is recognized as one China’s favorite and most enduring mythological figures.

More than just the god of wealth, Caishen is considered by his devotees to be the most powerful of all of China’s gods. Recognized in Chinese folk mythology, and both Taoist and Buddhist religions, belief in Cashien’s power to bless followers with riches and prosperity is found throughout the world. The tales of Cashien has endured for over 3,000 years and show no sign of slowing soon.