Cangjie: the Historian who Invented the Chinese Writing System

In this in-depth bio, you will learn who Cangjie is, his history, and why the Chinese writing system is credited to his name.

Cangjie is known as the cultural Chinese hero who invented the Chinese writing system. Depicted as having four eyes that viewed the natural world in myriad ways, Cangjie gave birth to a written language still viewed as the great pearl of Chinese culture; a language that defined and encapsulates the very history and culture of China’s people.

Cangjie is an icon of monumental importance to the Chinese people whose influence is still felt around the world today. More than just the Chinese writing system inventor, Cangjie gave mankind power over the natural and spiritual worlds and made the gods and spirits cry grain from the skies.

In Chinese artwork and literature, Cangjie is best known for being born with four eyes that enable to see processes and links that normal humans cannot. Later myths give Cangjie’s eyes the powers to determine truth from lie and right from wrong.

Who is Cangjie in Chinese Mythology?

Cangjie is credited with the creation and development of the Chinese pictographic writing system. Given the impossible task of designing a brand new writing system for the Yellow Emperor and his new empire, it was through the integration of inspiration and his unique sets of eyes that Cangjie was able to create a system of writing that would go on to define China’s culture for thousands of years.

– Assigned the task of creating a writing system

During the reign of the Yellow Emperor in 2650 AD, Cangjie faithfully served as the official historian of the Emperor’s court. The Emperor had long worked to unify all of China and needed a more efficient written language to communicate with the far reaches of his kingdom.

At the time, China’s only method of written communication was Quipu (rope knot tying), and this would not be enough to record the Yellow Emperor’s legacy. Knowing that Cangjie viewed the world uniquely since he was born with four eyes, the Yellow Emperor ordered Cangjie to create a new language that would efficiently record Imperial information.

Cangjie threw himself into the monumental task but struggled greatly. Unable to even create even one single character, he left the Emperor’s courts and walked into the wilderness and mountains to center his mind. One legend says that while he sat in contemplation, his four eyes began to notice the natural patterns of his surroundings – the leaves of the trees, the clouds in the sky, the flow of the rivers, and the ridges of the mountain.

As inspiration began to flow, a tortoise walked up from the nearby river and sat by him. Cangjie, it was said, picked up the tortoise, marvelled at the flow of lines and patterns, and then began to quickly sketch pictograms that represented the world around him. The beginnings of the Chinese language was born.

In another version of the legend, after wandering into the wilderness, Cangjie witnessed a phoenix flying high above, carrying a strange item in its talons. As the bird lazily drifted in circles above his head, it eventually dropped the object at Cangjie’s feet. Amazed, Cangjie sees that the strange item is dried mud with the impression of a footprint.

Even stranger, Cangjie had never seen this type of footprint before. A nearby hunter tells Cangjie that the footprint belonged to a Pixiu (a winged lion), as a Pixiu’s hoof print did not look like any other footprint in existence. Inspiration struck Cangjie, and he believed if he could find the one thing that set apart everything on earth, he could record that as a special character.

Cangjie picked up a nearby piece of wood and began to scratch symbols for everything around him. Soon, he had compiled a long list of logograms.

– The Quaking of the Earth and Skies 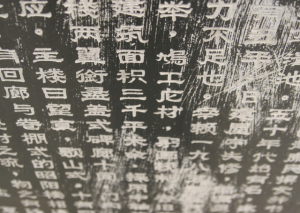 In both legends, upon recording the symbols for the earth, the sun, the moon, and the heavens, it is said that the skies and earth quaked, and both gods and ghosts wailed at the power mankind now held. And as Cangjie finished transcribing the Chinese language’s first characters, the tears of the spirits became grain, giving mankind an abundance of food.

– Adopting Cangjie’s system of writing throughout the empire

In both legends, upon his return to the courts, the Yellow Emperor was greatly pleased with Cangjie’s brilliance. The Yellow Emperor called the rulers of the nine provinces together to instruct them on the use of their new writing system, and the official Chinese language was born.

As a special blessing, the Yellow Emperor gave the descendants of Cangjie the surname Shi (meaning the person above the monarch who is above the masses), to honor Cangjie’s service as official Empire historian and Chinese writing system inventor.

As the tales of Cangjie spread, soon his four eyes gained the ability to see right from wrong and truth from lie. And his gift to see natural patterns that others could not, grew to being able to discover the greatest mysteries of life and death.

As the creator of the Chinese writing system, Cangjie remains one of China’s greatest cultural heroes, and he has been continually honored over China’s history. The earliest example of China’s dictionary, from 220 AD, is called the Cangjiepian. And the way that characters are input into typewriters and computer keyboards is called the Cangjie Input Method.

In 2004, Cangjie was honored by NASA after the Mars Rover, Spirit, discovered a ridge of spectacular rocks upon the red planet.  This area is now called The Cangjie.

The life of Cangjie is annually celebrated during the Guyu festival on April 20th. This is the day that Cangjie created the pictograms for the sun, earth, and skies, revealing the secrets of the heavenlies.

Monuments to Cangjie’s legacy still stand across China and can be found in Shaanxi, Henan, Hebei, and Shangdong. And Cangjie’s descendants, even 5,000 years later, still proudly bear his name.

Cangjie, a historian who defined a nation’s enduring culture

Known as the cultural Chinese hero who invented the Chinese writing system, Cangjie holds a special place in Chinese history. More than a simple historian, Cangjie gave birth to a nation’s written language that is still in use 4,500 year later.

Cangjie is an icon of monumental importance to the Chinese people whose influence is still felt around the world. With four eyes that could see beyond the veil of truth and fiction, Cangjie could detect patterns that normal eyes could not see, and designed a language that still endures today. More than just the Chinese writing system inventor, Cangjie’s pictographic language shook the heavens … and made gods wail in fear.