Chang’e: Goddess of the Moon, Drinker of the Chinese Elixir of Immortality 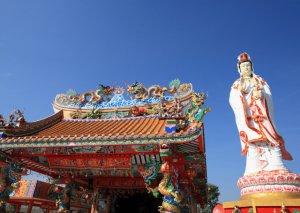 Chang’e is the Chinese moon goddess and the wife of the mythical archer Hou Yi. Renowned for her great beauty, she is famous for drinking the Chinese elixir of immortality and ascending to the moon with her white rabbit, Yu Tu.

The stories of Chang’e as the goddess of the moon give her a special place in the pantheon of China’s gods, as the moon is greatly revered in China’s ancient folk tales. Most versions of Change’s legends include her husband Hou Yi, the Chinese elixir of immortality, Xiwangmu, ten suns, the moon, the Jade Emperor, and the leaving out of food (or moon cakes) during the Mid-Autumn Festival. Chang’e and Hou Yi are China’s original star-crossed lovers, and their story is still honored today.

Chang’e’s name means beautiful young woman, and due to the place of honor she holds, the symbol for her name is completely unique to her. It is believed that she was once known as Heng’e, but Emperor Liu Heng (Han Dynasty) used a similar character in his name. Since emperors were supposed to be unique, it was considered bad form to share letter character traits with cultural figures, and thus he decreed that Heng’e should be changed to Chang’e.

The goddess of the moon is a favorite subject in Chinese art. Chang’e is often depicted as an elegant young woman with flowing robes, pale skin, jet black hair, and blood red lips. Sometimes she is painted holding the disk of the moon in her hand or with a white hare.

Who is Chang’e in Chinese mythology?

Chang’e is the goddess of the moon in Chinese mythology. She is married to the mythical archer, Hou Yi, and lives in a lunar palace with her pet hare, Yu Tu. The story of Chang’e and Hou Yi is one of the most famous myths of ancient China and is celebrated during the Mid-Autumn Festival.

The goddess Chang’e is sometimes confused with another lunar deity named Changxi. In ancient Chinese mythology, Changxi gave birth to the twelve moons, which represents the Chinese lunar calendar.

While Changxi is named in much older writings, by the time of the Song Dynasty, Changxi’s status diminished and it came to be believed that she was the daughter of Chang’e. Many of Changxi’s attributes then became the attributes of Chang’e.

Chang’e and the myth about the moon

In the more romantic version of Chang’s and Hou Yi’s story, in ancient times there was no night upon Earth, as ten suns hung in the heavens. The Jade Emperor commanded that only one sun shine at a time, but the suns were disobedient and often came out together, scorching the Earth and tormenting its people.

Hou Yi, the greatest archer the world had ever known, and the husband of the most beautiful woman on the Earth, Chang’e, came forward and shot down nine of the ten suns. And as the remaining sun grew tired, it needed to rest, creating night where the moon could be seen in the sky. As a reward for saving the earthly realm, the goddess Xiwangmu offered Hou Yi an elixir of immortality (in some versions a pill). Unsure whether to take the elixir, as he didn’t want to live eternally without his beautiful wife, Hou Yi gave the elixir to Chang’e for safe keeping.

One day when Hou Yi was out hunting, Hou Yi’s apprentice Peng Meng broke into his house to steal the elixir. Knowing the evil intent of his heart if he was able to steal the potion, Chang’e drank every last drop so Peng Meng could not take it. Chang’e found herself rising in the air, unable to stop. As she flew towards the clouds, Chang’e chose the moon to live, as it was the closest place she could be near her beloved husband.

After discovering his wife’s honorable sacrifice, Hou Yi was filled with utter despair and sadness. Every month as the moon grew closest and full, Hou Yi set up a table and left out Chang’e’s favorite desserts, fruits and cakes, in case she could ever find her way back home. In some versions of the romantic tale Hou Yi takes his own life. In others, he dies of a broken heart.

The legend of the star-crossed lovers, Chang’e and Hou Yi, is celebrated during the Mid-Autumn Festival throughout China. Lovers, and those who desire love, often leave “moon-cakes” and fruit out under the full moon to honor the sacrifices and adoration of the legendary moon goddess and the mythical archer. 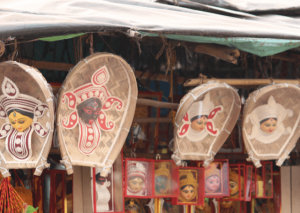 While the romantic version of the myth of Chang’e is the most popular, the older versions of the tale of the moon goddess are darker indeed.

In some versions of the myth, Chang’e was originally an immortal being who lived in the palace of the Jade Emperor. After carelessly shattering a sacred porcelain jar, the Jade Emperor condemned her to live upon earth as a mortal. It was there, destitute and alone, that she met the great archer, Hou Yi. Captivated by her beauty, Hou Yi immediately took Chang’e as his wife.

After Hou Yi gains the elixir of immortality as a reward for shooting nine of the ten suns, Hou Yi could not bear to take the elixir and be separated from his beautiful bride. Deciding to wait, Hou Yi hid the potion underneath his bed.  However, Chang’e, being a former immortal being, knew that Hou Yi was hiding something given from the gods, and devised a plan to steal the potion for herself.

After Hou Yi fell asleep, Chang’e found the elixir of immortality and drank every drop. Knowing something was wrong, Hou Yi woke from his bed and found the empty bottle on the ground and Chang’e rising into the air.

Furious at her betrayal, Hou Yi grabbed his bow made from tiger bone and began to fire at Chang’e but could not bring himself to aim true. Chang’e rose to the moon, never to be seen by him again. Over time, Hou Yi’s anger began to fade, and he spent his nights looking at the moon thinking of how lonely his bride must be. To let Chang’e know that he still loved her, Hou Yi left her favorite desserts out every full moon, until the day he died.

In another version, the gods punish Chang’e for her thievery and transform her into a toad, condemning her to carry out a horrid and lonely existence on the moon. Other versions present Chang’e as the slave of addiction, addicted to the Chinese elixir of immortality. In these versions, Chang’e is cursed to spend her lonely days on the moon brewing the liquid, accompanied by her white rabbit, Yu Tu, who pounds the required herbs into powder with its feet.

There are some myths that name Hou Yi as the god of archery. In these tales, after Chang’e steals the elixir, Hou Yi chased Chang’e to the lunar surface. Once there, he is confronted by Chang’e’s rabbit, and it will not let Hou Yi pass until he reconciles with his wife. After forgiving Chang’e, Hou Yi builds her a palace on the moon that rivals Hou Yi’s palace on the sun, and the husband and wife come together on the 15th of every lunar month.

The story of the star-crossed lovers, Chang’e and Hou Yi, is honored during the annual Mid-Autumn Festival, which is celebrated throughout Asia. Set during the eighth lunar month’s full moon, the festival is a harvest holiday where rice, corn, and wheat are in abundance. Cakes and candies are made during large gatherings, and families and friends come together to remember the past year.

It is common during these festivals to make mooncakes which are decorated with pictures and symbols of Chang’e and Yu Tu, and to either consume them or leave them on open air altars under the full moon in honor of Hou Yi and Chang’e.

The story of Chang’e is often told from old to young on the night of the full moon’s peak, sometimes as a romantic tale of enduring love, or as a myth that warns young women about the danger of selfish ambition.

The story of Chang’e was given new life and made famous throughout the world during the Apollo 11 moon landing, when Chang’e’s story was told to the astronauts during its live worldwide broadcast. After hearing the myth, astronaut Michael Collins told mission control that he would “keep an eye out for the bunny girl.”

The government of China honors the moon goddess today, as the Chinese National Space Administration calls its lunar exploration program the Chang’e Project.

Chang’e, mythical goddess of the moon

Known as the Chinese moon goddess, Chang’e holds a special place in the hearts of the people of China. The fated story of Chang’e and Hou Yi is one of the most famous myths of ancient China and is celebrated during the Mid-Autumn Festival.

The story of China’s moon goddess, Chang’e, is one that has resonated through the ages. The next time the moon is full, take a closer look. You may find Chang’e and Yu Tu looking back at you.