In this in-depth bio, you will learn who The Eight Immortals are, their history, and the many exploits and myths credited to their names.

In Chinese mythology, the Eight Immortals are renowned heroes who fight against the forces of evil. In literature prior to the 1970s, they were often called the Eight Fairies or Eight Genies. Wildly popular throughout China’s history, the stories of the Eight Immortals found their way into almost every level of ancient Chinese society.

Most of the Eight Immortals (also called the Ba Xian) were born during the Tang or Song Dynasties and all are revered in Taoism and Chinese folk mythology. Also referred to as the 8 Drunken Gods, the 8 Immortals were believed to have lived on islands in the Bohai Sea, including Mount Penglai.

As the 8 Taoist Immortals represent long life and fortune, it is common to find artwork depicting them across various dynasties throughout China’s history. Nobles commissioned sculptures of the Eight Immortals to adorn their homes and palaces. Silk paintings and wall murals are still found throughout temples and public spaces.

While occasionally depicted individually, the Eight Immortals are usually painted as a complete group. The Eight Immortals are often shown with Jade Hand Maidens which are servants of highly ranked gods. This shows that often throughout their history that the Eight Drunken Gods were revered as powerful figures in the Taoist faith.

And often, other Chinese dieties, such as the Queen Mother of the West and the Three Stars are painted or depicted with them. The most famous depiction of the Eight Immortals is found in the Eternal Joy Temple in Ruicheng.

Influence of the Eight Immortals in cultural history

A number of Chinese martial arts are named after the Eight Immortals, often employing movements and fighting styles that mimic those of each genie. Drunken boxing makes extensive use of the legends of the Eight Immortals for body conditioning, meditation, and combat.

Over the centuries, the Eight Immortals have found their way into artwork, writings, even comics, television, and movie productions. And while very few temples are completely dedicated to the Eight Immortals, Daoist temples commonly have the Eight Symbols of the Immortals across the primary temple structure, as these symbols are believed to ward off the presence of evil.

Also, statues and paintings of the Eight Immortals are very common in Buddhist temples and monasteries, where they are placed near lesser gods to guard them.

Who are the Eight Immortals in Chinese mythology? 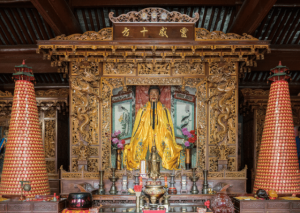 The 8 Immortals lived on a group of five islands in the Bohai Sea. They were most often found on Penglai Mountain which was on a serene island that only the Eight Immortals could tread. Only the Immortals could make their way to the island, as the water surrounding it would not support the weight of ships.

Taoist philosophers believe that the Eight Drunken Immortals represent archetypes of the Tao, and each character represents different aspects of the natural order of the universe. The Eight Immortals did not achieve immortality due to their moral certitude. Instead, their virtue, attitudes, and pursuit of honor are actually a benefit from their gaining of immortality.

Even their commitment to following the way of the Tao is not a rigorous one but is instead an internalized one. Instead of ritually following rules like a daoshi (priest), for the Eight Immortals the Tao is simply written on their hearts. This is in line with the Taoist belief that life is not grasped as a concept but can only be known through the living experience of the everyday.

Cao Guojiu was a honorable bureaucrat who served the Imperial court. However his brother, Cao Jingzhi, was well known throughout the kingdom for being a corrupt gambler. Cao Guojiu often found himself covering for his brother’s debts, yet eventually Jingzhi’s transgressions caught up with him and he was charged with corruption. So embarrassed by his younger brother, Cao Guikie surrendered his career in politics and retired to study Taoism.

Due to his dedication to his family, his pursuit of honor, and his commitment to Taoism, Cao Guojiu attained immortality. In other legends, Cao Guojiu was a magician who was known as a con man and criminal. After narrowly escaping death, Cao Guojio reformed his life and dedicated himself to the Tao, thus eventually achieving immortality.

Han Xiangzi, the grandnephew of the famous poet, Han Yu, was enrolled by Yu in a Confucian school. However, Han Xiangzi had no interest in going to school. Yu then enrolled Xiangzi in a Buddhist school. Again, Xiangzi was not interested. Instead, Han Xiangzi preferred to spend his time picking flowers.

It was through Taoism that Ziangzi discovered his musical giftings and was given a magical flute. Han Xiangzi found great joy in contemplating the beauty of the mountains and is often depicted as a hermit.

He Xiangu was special from birth. Born with exactly six hairs, she was marked as set apart by the gods. When she turned fourteen, she had a vision where she was told by the gods to eat powdered micah everyday, remain chaste, and to eliminate food from her diet so that she would be immortal.

She believed the vision, and eventually she ascended to Heaven. Some legends state, however, that she only became immortal after engaging in sexual relations with Lu Dongbin. The only woman of the Eight Immortals, the lotus she carried had the ability to improve physical and mental health.

Lan Caihe is described as androgenous. Lan Caihe loved alcohol, and one day after getting very drunk, he left the world and rode to heaven on a large crane. An extravagant street performer, Lan Caihe shows special generosity towards the poor and distraught.

Li Tieguai was a gifted and handsome man who learned at the feet of the founder of Taoism, Laozi. Li Tieguai was such a gifted student that Laozi taught him the secret of leaving his physical body and astral traveling to the heavenly realms. Li Tieguai was so exceptional at this skill, however, that on one occasion when visiting the heavens, he left his body for six days.

Believing him to be dead, Li Tieguai’s wife had his body cremated, and then scattered the ashes. Yearning to return to the mortal realms, Li Tieguai was forced to inhabit the body of a crippled old man. Due to this, Li Tieguai carried a gourd (sometimes bottle) of medicine that would cure any illness, and he would give it to those in need.

Lu Dongbin is considered the most popular of the 8 drunken immortals. Lu Dongbing is often given romantic traits, and he is a god that oozes sexual power. In some legends, Lu Dongbin was a renowned poet of the Tang Dynasty. He desired to be Zhongli Quan’s disciple, and he successfully completed ten trials to prove his worth. In other myths, Lu Dongbin was a carefree dropout, quitting the Imperial examinations so he could commit to a life of wandering and pursuing the Tao.

The most powerful legend of Lu Dongbin is referred to as The Yellow Millet Dream. In the legend, Lu Dongbin while cooking a pot of grain. While dreaming, he lived an entire life of eighteen years – working his way through multiple positions of government, became married, forced to resign, and then divorced. When he awoke, he was disoriented and felt lost. He found that the dream was gifted to him by Zhongli Quan to make him understand that a material life is meaningless.

Zhang Guolao was believed to be a necromancer who used occult power to raise the dead. He could drink from poisonous flowers, pick birds from the sky with his hands, and could travel thousands of miles a day upon his mule. Once, while visiting a temple, Zhang Guolao fell ill and died. His body began to quickly decompose and sank into the soil.

Days later, however, he was seen alive and walking on a mountain next to the temple. Recommitting his life to the Tao, after many years of contemplation and study, Zhang Guolao became ill again. This time his skills in necromancy could not help him and he died. His body was eventually found in the Zhongtiao Mountains.

After his disciples buried his body, a few days later they found that his body had ascended to the heavenly realms. Known for his love of alcohol and laughter at the events of his life, Zhang Guolao was known to provide levity to tense moments involving the Eight Immortals, including drunkenly riding his donkey backwards.

Zhongli Quan is the oldest of the Eight Immortals. When Zhongli was born he had the ability to speak. It is said that he came out of the womb in a blinding white light. During the time of the Han Dynasty, he served as a general. During his service he was assigned to Tibet, where he fell in love with Taoist teachings and meditation.

Zhongli was so gifted, during a meditation session he became a cloud of gold dust and drifted to the heavenly realm. Zhongli Quan has a distaste for materialism and earthly possessions, so he is often depicted as fat, dirty, and disheveled.

Legend of the Eight Immortals

The Eight Immortals play an essential role in Chinese mythology and spiritual life. Renowned heroes who fight against the forces of evil, the stories of the Eight Immortals have found their way into almost every level of ancient Chinese society.

Tales of the Eight Immortals have made their way into artwork, sculpture, literature, comics, television, and movies. Their representations are found in everything from ancient temples to household products. More than just stories of action and adventure, the myths of the Eight Immortals have colored China’s cultural history, and stand as a testament to its virtue and honor.