Erlang Shen: The Chinese God of Engineering With The All-Seeing Third Eye 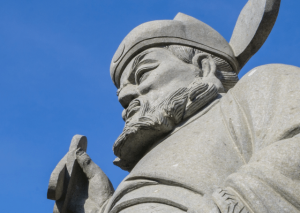 In Chinese mythology, Erlang Shen is the god of engineering and is regarded as a warrior deity. Notably, Erlang Shen is known for having an all-seeing eye in the middle of his forehead that can see through evil spirits.

Erlang Shen is considered as an honorable god who represents virtuousness, and along with a being a deity of war, he is also known for many other traits – brewing, hunting, protector of children, farming, blessing prostitutes, the creator of Chinese drama, and also as the patron of Sichuan province. In Chinese culture, Erlang Shen is also a folk hero that helped alleviate terrible flooding.

In artwork, Erlang Shen is easily identified by his third eye and handsome appearance. In the novel, Journey to the West, author Wu Cheng’en describes Erlang Shen as “refined, his visage noble, his ears hung down to his shoulders, and his eyes shone. The hat on his head had three peaks and phoenixes flying, and his robe was of a pale goose-yellow.

His boots were lined with cloth of gold; dragons coiled round his socks. His jade belt was decorated with the eight jewels, at his waist was a bow, curved like the moon. In his hand a three-pointed double-edged spear. His axe had split open Peach Mountain when he rescued his mother, His bow had killed the twin phoenixes of Zongluo.

Widespread was his fame for killing the Eight Demons, And he had become one of Plum Hill’s seven sages. His heart was too lofty to acknowledge his relatives in Heaven; In his pride he went back to be a god at Guanjiang. He was the Merciful and Miraculous Sage of the red city, Erlang, whose transformations were numberless.”

Who Is Erlang Shen is Chinese Mythology?

In Chinese mythology, Erlang Shen is revered as a warrior deity and as the god of engineering. His most well-known feature is his third eye in the center of his forehead.

– Erlang Shen as a God (demigod)

The most popular versions of Erlang Shen’s myth say that he is the son of the sister of the Jade Emperor. Ruling over the realm of desire, Erlang Shen’s mother, Princess Yaoji, was tasked to maintain balance between the trysts and affairs of gods and humans. One day, a dark dragon escaped its heavenly prison and escaped to the earthly realm.

As Yaoji chased the dragon, it turned on her and injured her heart. A scholar named Yang Tianyou came upon the wounded princess and gave her a piece of his own heart to heal her own. Falling in love with the mortal, they had three children – Yang Jiao, Yang Jian (Erlang Shen), and Yang Chan.

But the princess’ and mortal’s love was not meant to be. As the ruler of the Desire Realm, it was Princess Yaoji’s role to prevent the gods’ urges (ambition, greed, lust, love, and affection) to affect their dealings with mortals. As she had violated her divinely ordained role, the Jade Emperor was furious, and sent his armies to execute her family. Only Erlang Shen and his mother escaped death, but as punishment, the Jade Emperor placed Princess Yaoji in chains and imprisoned her underneath Tai Mountain.

As a baby, Erlang Shen exhibited incredible power and strength and had a third eye, which could see through evil spirits. Over time, he demonstrated that he was incredibly gifted in the martial arts, learning fighting styles that included the seventy two transformations from Yuding Zhenren (one of the golden gods). Soon, he became the best warrior of the Jade Emperor’s heavenly armies.

Erlang Shen is well-known for both fighting against and with the Monkey King, even capturing him upon the Jade Emperor’s command. Erlang Shen was often accompanied by his dog, Xiaotian, that would assist him during battle. Erlang Shen also carried a three pointed and double-edged sword. In some versions of the myth, it was a double-edged lance or spear.

When Erlang Shen became of age, he took his famous double-edged lance and sliced the mountain in half to rescue his mother. In other versions of this famous legend, Erlang Shen wielded lightning bolts and attacked the demons of the underworld who were torturing her (this myth later became a cautionary tale to warn children to behave for their mothers, or Erlang Shen would strike them with lightning).

– Erlang Shen as the God of engineering 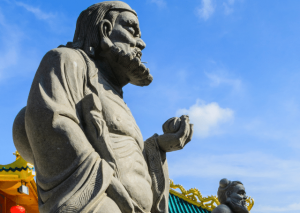 Erlang Shan is regarded as the deity of engineering who helped stop the annual flooding of the Min River which would devastate Dujiangyan city and the Chengdu Plains.

Erlang Shen’s father, Li Bang, was hired to prevent the yearly flooding that would affect the lives of the people of the Chengdu Plains and Dujiangyan city. No matter what he tried, however, Li Bang could not discover the source of the flooding, as it did not appear that the flooding was natural. Li Bang sent his second son, Erlang Shen, to sail up and down the river for a year to attempt to discover the source of the annual flood, but his son could not discover the cause either.

One day, as Erlang Shen is walking with seven hunters who had witnessed his bravery in slaying a rogue tiger, they chance upon an old woman who is crying at the edge of the river near Dujiangyan. She tells Erlang Shen that she is distraught, as one of her grandsons is to be sacrificed to a dragon that has held dominion over the river for generations. Believing that he has discovered the source of the river’s flooding, Erlang Shen volunteered to take the place of the woman’s grandson to be offered as sacrifice to the dragon instead.

When the ancient dragon arrived to take his sacrifice, Erlang Shen and his friends leapt from hiding and chased the dragon to the river, where the old woman trapped the dragon with chains in a pool below the Dragon Taming Temple.

With the dragon immobile, Erlang Shen cleaved the creature in half with his double-edged lance. With the dragon dead, the annual flooding ended and peace and tranquility came to the Chengdu Plains. To thank Erlang Shen for his bravery, the people elevated Erlang Shen and his father to godhood and dedicated a local temple as Two Kings Temple in their honor.

In addition to saving the Chengdu Plains when he trapped a river dragon below the Dragon Taming Temple, another legend speaks of Erlang Shen as capturing and stopping yet another dragon that tormented Dujiangyan. In this legend, a fire dragon that lived in the mountains tormented the city, and the people called on Erlang Shen to stop it.

Erlang Shen climbed atop nearby Yulei Mountain and turned into a giant, quickly building a dam with sixty six mountains, trapping the dragon underneath the water and creating the Dragon Pacifying Pool.

– Erleng Shen, the warrior God who stopped the floods

Legend says that in the time of Emperor Yang, there was a hermit who lived on Qingcheng Mountain named Zhao Yu. The hermit desired to live in peace and quiet, and to those that did not know better, he was simply an old man. But when a flood dragon threatened to destroy the countryside, it was revealed that Zhou Yu was actually the governor of the province who had been appointed by Emperor Yang. Zhao Yu set out with one thousand loyal men to face the serpentine monster. When Zhao Yu reached the river, he dove head-first into the water with his sword drawn, later emerging with the dragon’s head in his hands.

After Zhao Yu died, Jiazhou was again struck with flooding. The Chronicle of Changshu County recorded that at the height of flooding, a figure riding a white horse was seen fighting against the current and directing the waters away from the city. Believing that Zhao Yu had returned as the god Erlang Shen, the people built a temple to Zhao Yu as Erlang Shen. After this, the floods ceased forever.

General Deng Xia served under Erlang Shen in his army. Deng Xia was a gifted warrior who was greater than any other soldier in Erlang Shen’s charge. After Erlang Shen’s death, Deng Xian, like his commander before him, defeated a terrible flood dragon. After his victory, Deng Xia was  given the title Erleng Shen and a temple was dedicated to him in Hangzhou.

The most notable physical trait of Erlang Shen is his third eye. Often called The Eye of Heaven, Erlang Shen’s third eye could not only see through spirits, it could also tell truth from lies.

God Erleng Shen, the warrior deity with the third eye

In Chinese mythology, Erlang Shen is the god of engineering and is regarded as a virtuous warrior god. Gifted with a third eye that can see through spirits and divide truth from lie, Erlang Shen is a force for good in the Chinese pantheon of gods.

One of the most popular subjects in the Chinese mythos, the stories of Erlang Shen are legend. Whether he is depicted as a fiercely loyal demigod who fights for the celestial armies, or as the son of an engineer who defeats dragons that cause floods, the tales of Erlang Shen have delighted listeners for thousands of years. With his third eye and three-pointed sword drawn, no demon or dragon dare stand in his way.