In this in-depth bio, you will learn who Fuxi is, his history, and the many myths and legends credited to his name.

Fuxi, also known as Fu Hsi or Paoxi, is the ancient Chinese hero and humanity’s original ancestor, who with his sister Nuwa created mankind. Fuxi is regarded as China’s first hero due to teaching humans how to hunt with iron weapons and use nets for fishing.

Fuxi is also credited with the creation of cooking and music, inspiring the Cangjie writing system, teaching of animal domestication, cultivation of silk worms, and the weaving of silkworm threads into textiles. Fuxi also demonstrated to others how to dig dikes and irrigation ditches off the Yellow River to assist in land cultivation and agricultural development.

Because of the relationship between Fuxi and Nuwa, it fell to Fuxi to create ancient China’s first marriage contracts. Fuxi also created the Eight Trigrams, the basis of the philosophy of the I Ching, and also inspired calligraphy. Due to his many contributions to humanity and Chinese culture, Fuxi is revered as the first of China’s Three Sovereigns and for creating China’s first dynastic period.

Along with his sister Nuwa, Fuxi is often depicted as having a human head and the body of a snake. In temple representations, Fuxi often appears as an old sage dressed in yellow robes. When depicted in rural settings, he is usually drawn with animal skins. Some artwork depicts Fuxi as a head growing out of a mountain and adorned with a leaf wreath.

Who is Fuxi in Chinese mythology?

In the beginning, Pangu, the creator god of Chinese mythology, was a giant asleep in the egg of chaos. When he woke from his slumber, he stood and tore the sky from the earth. After dividing the sky and earth, Pangu fell dead from the effort. Pangu’s body turned into rivers, foliage, valleys and mountains, animals, and everything else that would make up the world.

One of the creations from Pangu’s death was a god known as Huaxu. One day Huaxu stepped into the footprint of the god of thunder, Leigong, as the gods of the heavens had begun to walk upon the newly separated earth. Due to stepping into the powerful god’s footprint, Huaxu soon found herself pregnant with twins, Fuxi and Nuwa.

Born with the faces of humans and bodies of snakes, Fuxi and Nuwa were birthed in Chengjia, near the lower reaches of the Yellow River. Fuxi had the ability to transform into a dragon but preferred the shape of a man with two legs and a tail. Fuxi and Nuwa were often depicted with their tails intertwined and holding the symbols that represented yin and yang, the principles found in everything in the created universe.

– The many creation myths of Fuxi and Nuwa

In one version of humanity’s creation myth, soon after the birth of Fuxi and Nuwa, a great flood covered the earth, and only Fuxi and Nuwa remained unharmed. Many years passed with only each other to keep themselves company. Soon, Fuxi and Nuwa longed for others to be with.  After praying for a sign of approval, the Emperor of Heaven accepted their union.

In another version of the creation tale, found in the Classic of Mountains and Seas, Fuxi and Nuwa lived upon legendary Kunlun Mountain near Huashan. Trying to keep warm on a cold night, the twins created two fires. As the fires burned, they eventually became one. While watching the fires merge, Fuxi and Nuwa joined together as husband and wife.

Deciding that they would like to have children, they molded clay into the shape of humans. Using their powers to imbue the small figurines with life, soon Fuxi and Nuwa found that they had created the world’s first human beings. 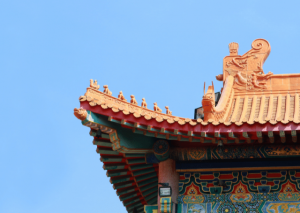 Written over a thousand years ago, author LiRong wrote – “There was a brother and a sister living on the Kunlun Mountain, and there were no ordinary people at that time. The sister’s name was Nuwa. The brother and sister wished to become husband and wife, but felt shy and guilty about this desire. So the brother took his younger sister to the top of the Kunlun Mountain and prayed: “If Heaven allows us to be man and wife, please let the smoke before us gather; if not, please let the smoke scatter.” The smoke before them gathered together. So Nuwa came to live with her elder brother. She made a fan with grass to hide her face. (The present custom of women covering their faces with fans originated from this story).”

No matter the version of the creation myth, Fuxi and Nuwa cared for their descendants. When their children faced hardship, Fuxi would often step in to bring aid.

The historian Ban Gu wrote – “In the beginning there was as yet no moral or social order. When hungry, they searched for food; when satisfied, they threw away the remnants. They devoured their food hide and hair, drank the blood, and clad themselves in skins and rushes. Then came Fuxi and looked upward and contemplated the images in the heavens, and looked downward and contemplated the occurrences on earth. He laid down the laws of humanity. He devised the eight trigrams, in order to gain mastery over the world.”

In one creation account, Fuxi saw that when a hunt went well, his children were able to feed themselves. But when the people failed to make a kill, they starved. After witnessing his children suffering, Fuxi could take no more. Walking to a nearby stream, he shoved his hands into the water and took out a great number of fish, teaching humans how to catch fish with their hands.

When this angered the god of the waters, the Dragon King, it was decreed that humans could no longer fish with their hands. Concerned that his children would no longer be able to feed themselves, Fuxi observed a spider weaving a web. Struck with inspiration, Fuxi gathered all of the reeds he could find and wove them into a net. Tossing the net into the river, within seconds it was filled with hundreds of fish. Soon, Fuxi had taught this new fishing method to all of his children, creating an easily sustainable food source for mankind.

Fuxi taught man to domesticate livestock, teaching mankind that it was better to raise animals for meat, milk, and field labor than to expend effort on hunting. He also taught humanity how to smelt metals, preserve meat, and create currency.

– God of the Eight Trigrams

The Eight Trigrams are a set of long and short marks upon round disks which are used to divine future events. Tradition states that the Eight Trigrams were revealed to Fuxi while he examined a map of the Yellow River. While looking at the map, a turtle supernaturally emerged from the Luo river, and Fuxi saw the arrangement of Eight Trigrams upon its shell.

The Eight Trigrams would eventually be used as the basis for the I-Ching, created during the Zhou Dynasty. Due to this, Fuxi is honored by scholars and soothsayers as the creator of the I Ching.

From February 2nd to March 3rd of the lunar calendar, a month-long festival is held to revere Fuxi at his temple in Tianshui. People and families throughout neighboring provinces come to pray, light incense, and honor Fuxi for his contributions to humanity and Chinese culture.

Fuxi’s tomb is located in Huaiyang in Henan province. Believed to be the resting place of Fuxi, the Tomb of Fuxi has been honored with visitors wishing to pay their respects for over 3,000 years. The giant estate is marked with buildings and plants designed to represent the Eight Trigrams.

Locals believe that Fuxi’s tomb was built upon an area where Fuxi would bring young women and men to decide on their marriage partner and enter into binding agreements. Ancient custom states that if female visitors rub their fingers in a small hole in the cornerstone of Xianren Hall (located on the estate), they will be blessed with a wonderful marriage and healthy children.

The dragon tailed originator of mankind

Fuxi is the ancient Chinese hero who is humanity’s original ancestor, who with his sister Nuwa created mankind. As China’s first hero, Fuxi is regarded as the first of China’s Three Sovereigns and as the creator of China’s first Dynastic Period.

As the father of humanity, Fuxi did not just want his children to survive. He wanted them to thrive. And through the effort of Fuxi, thrive they did, giving birth to an enduring culture that has lasted over 5,000 years.