Hou Yi: the Mythical Archer Who Saved the Earthy Realms 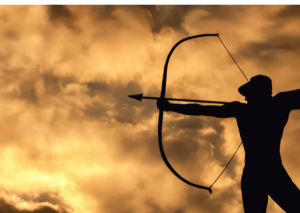 Considered the greatest archer that ever existed, and the star-crossed lover of the moon goddess Chang’e, Hou Yi holds an honored place in Chinese mythology. Armed with bow and arrow, Hou Yi is responsible for the singular sun in the sky and for saving the people of China from a number of plagues.

Hou Yi is the god of archery who aids mankind. Other legends portray Hou Yi as a demi-god or a mortal man offered eternal life, who has immortality stolen from him by the woman he loves.

Whatever the myth, Hou Yi was gifted with incredible strength, as he was the only being who could draw the string of his bow made of tiger bone, and fire arrows made from dragon tendon. In artwork and literature, Hou Yi is typically portrayed as wearing animal skins or the clothing of soldiers of the Tang Dynasty.

Hou Yi’s name literally means Lord Archer (Hou = monarch; Yi = archer – appellation of archer title), and the character given for Yi is unique to his name. Older writings refer to Hou Yi as simply Yi, as it is believed his honorable traits were a part of later retellings of earlier stories where Hou Yi was a tyrannical figure.

Who is Hou Yi in Chinese mythology?

In Chinese mythology, Hou Yi is the mythical archer responsible for the single sun in the sky. The story Hou Yi and the Ten Suns is one of China’s most enduring myths and describes not only how the sun came to be in the sky, but also how Hou Yi’s wife, Chang’e, came to be honored as the goddess of the moon.

When the Earth was still young, there were ten suns that shined upon the planet. The ten suns were the grandchildren of the Jade Emperor, and he instructed them that they could only shine upon the planet one at a time, or disaster would befall the earthly realm. However, the suns were disobedient, and would often come out together releasing destruction upon the earth.

When the suns shone together, the Earth burned with the fires of hell. Crops failed and livestock died. People fell as dead in the streets and their homes burned. Taking advantage of the chaos, monsters and demons began to ravage the natural realm.

A Chinese archer named Hou Yi, well-known for his inhuman strength and hunting prowess, went to the Jade Emperor and told him that if his grandchildren would not behave themselves, Hou Yi would be forced to shoot them down to save the people.

The Jade Emperor implored the suns to behave. However, in their insolence, they did not hear nor heed their grandfathers request. They continued to come out together and scorch the Earth. Finally, the Jade Emperor realized nothing could be done, and gave Hou Yi permission to shoot them from the skies.

The mythological archer stepped onto the highest mountain and gave the ten suns one last warning, but the suns ignored him. Hou Yi fired his bow and released nine arrows, striking them down. The tenth sun, in fear, fled to a cave underneath the mountain.

Darkness covered the earth. Creation cried out for the sun to reappear, but the sun was so terrified of Hou Yi that it would not emerge. Finally, a rooster began to cry out for the sun to appear. Unable to ignore the piercing cry, the sun finally rose from the cave and bathed the Earth in its light. To honor this moment, the roosters still cry out for the sun every day, right before it appears in the sky.

Impressed with Hou Yi’ exploits, the goddess Xiwangmu gave him an elixir of immortality (in some versions of the myth it is a pill). The Jade Emperor tells Hou Yi since he has saved the earthly realm, he may return to the palace as a god.

However, Hou Yi could not decide if he wanted to become a god. He had a young wife, Chang’e, and he did not want to be separated from her. If she could not live forever, then he did not want to, either. Unable to decide, Hou Yi tucked the elixir away. After coming home from the Jade Emperor’s palace, he fell asleep, and when going through his clothing, Chang’e discovered the elixir. Amazed by it, she could not resist tasting the glowing liquid. 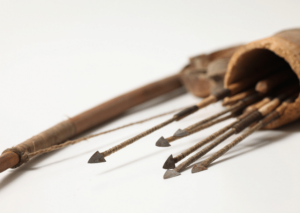 As soon as she drank the potion, Chang’e realized what she had done and knew Hou Yi would be furious with her. Chang’e, now immortal, fled to the moon. As she ran, Hou Yi thought to shoot her to stop her, but because of his love, he could not. Soon, Hou Yi began to leave fruit out every night for Chang’e so she could see that he was no longer angry at her.

In other versions of this myth, Hou Yi is not presented in quite the same positive light. In some stories, the suns’ mother and Emperor Yao must beg Hou Yi not to destroy the last sun. Other versions state that the last arrow had to be stolen so Hou Yi would not kill the remaining sun, thus stopping Hou Yi from destroying the world.

Another version of Hou Yi and the Ten Suns paints Chang’e in a more heroic light. After Hou Yi is given the pill of immortality, Hou Yi’s archer apprentice, Peng Meng attempts to steal it. While Hou Yi is out hunting, Peng Meng breaks into his house and confronts Chang’e. Knowing Peng Meng has a heart of evil, Chang’e swallows the pill to keep it from him, and then ascends to the moon.

In another version of the tale, after Hou Yi kills nine of the suns, the people anoint him king. However, after becoming king, Hou Yi builds a palace on the sun, and becomes tyrannical over the people in his kingdom. Knowing Xiwangmu has given Hou Yi the elixir of immortality, Chang’e steals it and consumes it herself, knowing that if Hou Yi drinks it, the people will never be free of him. As she begins to float away, Hou Yi becomes furious and chases her to the moon.

It is on the moon where the Hare confronts him and will not allow Hou Yi to pass until he promises to reconcile with his wife. Hou Yi asks for his wife’s forgiveness and builds her a palace. Every lunar month, on the 15th day, Hou Yi leaves his sun palace and meets Chang’e in her lunar palace to come together as husband and wife.

The story of Hou Yi and Chang’e is still an integral part of China’s Mid-Autumn Festival, and food is left out under the moon to honor the star-crossed lovers.

Other legends of Hou Yi the Chinese archer god

In other legends, Hou Yi is ordered by Emperor Yao, one of the Three Sovereigns of ancient China, to confront beasts known to terrorize humanity. The archer god is responsible for the extinction of the fierce beasts Yayu, Jiuying, Dafeng, Zaochi, Xiushe, and Fengxi, who had tormented humans for thousands of years.

Hou Yi also saved China from a number of ancient plagues, the worst of which was caused by a wind monster who caused storms throughout the empire. It is written that Hou Yi also saved the moon, as it was eaten by a dog that he was training who had drank from the elixir Hou Yi was given for eternal life. When caught, the dog spit the moon back out, and he then was placed at the gates of heaven to guard them.

Hou Yi, the mythological archer who saved the world 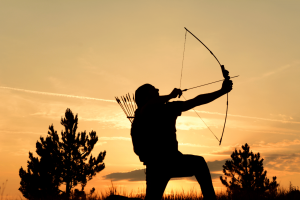 Hou Yi is known as the greatest archer in China’s history, and the story of Hou Yi and the Ten Suns is one of the most famous myths of ancient China.

Armed with his powerful bow and arrows, Hou Yi is responsible for the singular sun in the sky and for saving the people of China from monsters and plagues.

The reason for the lone sun in the sky and for the goddess of the moon, Hou Yi is more than just a simple archer. Hou Yi is an enduring figure in Chinese mythology, responsible for saving the world and creating lasting change on earth and in the heavens.