Who is Huxian in Chinese Mythology? 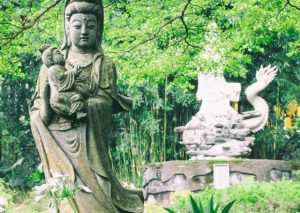 Huxian (胡仙) is the name of one of the Chinese fox goddesses. She is also represented in Chinese lore as a mythical fox. Huxian is the combination of words (hu), meaning ‘fox’ and (xian) meaning immortal.

The goddess also goes by Hushen or Huweng. This fox deity can take male or female form, but she often appears as a beautiful female or a fox with nine tails. Huxian’s goal is to seduce either men or women with riches until greed destroys them.

What is the Role of Fox Spirits and Huxian in Particular?

Many East Asian cultures revere the fox. Huxian is immortal and transcendent. He/she stands high on the hierarchy of the spiritual world, having accrued great power. Revered as deities, Huxian and other Chinese fox spirits (called Huli) are mainly worshipped in northern/northeastern China as part of folk religion.

Foxes are commonly known in many western cultures as cunning and crafty creatures. It is the same in Chinese mythology with all fox spirits. With age, the fox spirit gains even more powers and can eventually shift into human form. They are also always seeking immortality.

Huxian is primarily known as a trickster who can shapeshift into a human or an animal. She does this to bring about someone’s downfall. According to mythical literature, these spirits’ appearance can either be a good or a bad omen, including the nine tailed fox myth. There are mentions of these spirits coming as they roam around the country, coming to villages and into homes. Sometimes, they come to steal breath or to seduce men away from their wives. But there are other mentions of fox spirits bringing about peace.

Huxian is a fox deity often represented as the Chinese nine-tailed fox or (jiuwei hu). Under this form, Huxian is called Huxian Niangniang (狐仙娘娘), or Fox Immortal Lady. This fox is seen as female and is often associated with the dangers of seductive beauty since she attempts to lure men and women to their downfalls.

Images of the nine-tailed fox make the animal look female as well as seductive and alluring.

People would offer sacrifices to the fox spirits to keep them away from their villages in the past. The old belief was that they were bewitched women and could return to their human form to seduce men and then bear a half-human child. The word ‘huli jing’ has sometimes been used to refer to a woman having an extramarital affair. 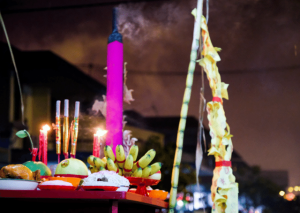 In some areas of China, offering a bride’s blood would occur before the ceremony to ensure that she was fully human. However, on occasion, the image of the nine-tailed fox can be a good omen. They appear in times of peace and promise prosperity. Fox spirits are worshipped and revered in many parts of China. Even to this day, you could find people still worshipping in north and northeastern China.

Many cultures have equated the fox to a spiritual creature. In Japan, Korea, and Vietnam, there are other fox spirits similar to Huxian.

The worship of fox spirits began in the Tang Dynasty. In some parts of northern China, it continues today. There were efforts to remove altars and shrines in later dynasties. Huxian is one of north China’s most popular deities in Anhui and Jiangsu, and Manchuria.

These areas engage in chūmǎxiān shamanism, which is the worship of foxes and other anthropomorphic creatures. This stems from Taoism and the belief that animals can eventually turn into humans after a certain number of years. Foxes, in particular, are always working towards becoming immortal. Huxian has already accomplished this, which is why his/her name means immortal fox.

To worship these deities, people will build altars to these deities and give sacrifices to them. Sacrifices are made for the fox spirits to bring prosperity or to keep them from getting bad luck. They can act as protectors or patrons of individuals.

In some areas, children receive images of Huxian when they are born. A girl will receive a female version and a boy a male version. Huxian is considered their patron god. Once a boy and girl marry, they will display their Huxian images standing together.

During the Tang dynasty, when the worship of these fox deities began, there was a saying that stated, “Where there is no fox demon, no village can be established.” One could find shrines to these spirits in homes, backyards, chambers, temples, and more.

Today: Where Can We See Mention of Chinese Fox Spirits?

Fox spirits still play a role in East Asia’s pop culture. You can find references to the old myths in television and movies such as the Korean film, The Fox with Nine Tails.

But even in Western cultures, in books, films, and TV, one can see the fox as a cunning and mischievous creature. Think of the fox in the story of The Gingerbread Man. In literature, foxes can twist their words and lure people and animals into traps. This is how Huxian, the Chinese fox spirit, operates.

Huxian is almost like a culmination of all the fox spirits, and he/she has reached the wise age where she has learned to take on human form. Like goddesses in other cultures, such as Greek mythology, Huxian is often portrayed as a beautiful woman who seduces men for her gain.

All fox spirits in these cultures are seen as both good and bad, although most often seen as female. The spirits are worshipped to gain power or to keep danger away. Even after so many years, one can still see remnants of fox spirit worship in some regions of Eastern Asia.

The fox animal is seen as intelligent and clever, yet also cunning and crafty in cultures all over the world. Particularly in Asia, these animals can shapeshift into humans. It can be a frightening thought for those who fear Huxian. Or it can be comforting that with her powers, she is watching over us and being a symbol of peace and wealth.