Who is Lu-Ban in Chinese Mythology? 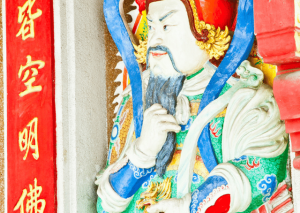 Lu-Ban was born a human but now revered as the God of Carpentry in Chinese mythology. He is also considered the Saint of Builders and Contractors.

Not only was he an engineer, carpenter, and all-around innovator, but he’s invented many tools, tools to this day we still use. However, no one is quite sure if he existed, but people always remember him for his legacy of skills.

Lu-Ban was born during the Zhou Dynasty in the State of Lu to a family of craftsmen and artisans. His name has initially been Gongshu Yizhi. Because of his family, it seemed his destiny was to be an inventor from the very beginning. However, he didn’t have much interest in his studies until he began working with his tutor, Zi Xia. Zi Xia had been a disciple of Confucius and inspired Lu-Ban to take to his studies with enthusiasm.

After working with Zi Xia, Lu-Ban developed a genuine love of learning and became a skilled engineer. Bao Laodong also taught him his carpentry skills. He didn’t know it then, but learning woodworking for Lu-Ban would change everything about building and carpentry for the rest of the time.

His first foray into the working and building world was in the State of Chu. He worked on tools and items used for naval and siege warfare. Some of his inventions, such as siege weapons, were key in the victory of certain battles. Wood was the primary material used in China for building. Thus, many of the tools he created were made entirely from wood, such as the planer and the chisel.

After some time, he moved on to different projects. He gained popularity as the government noticed how useful his inventions were. He began to develop and build a small following. Before doing projects, government officers would offer him gifts.

But he also had followers from among the builders who would remember him as they raised the first beam of a building. During his life, Lu-Ban had an interest in teaching his skills to other artisans. He wanted his tools to save time and effort. He left his legacy behind in more ways than one.

Inventions Credited to the Saint of Builders and Contractors: What Exactly Did He Do?

Many innovations were credited to Lu-Ban. It almost makes sense that his story got elevated to mythology status. His focus was to create tools that saved time and labor, and that he did. Many of these inventions are still in use today. Carpentry and building wouldn’t be the same without them.

Tools and inventions that Lu-Ban invented:

Lu-Ban’s most famous invention was the invention of the saw or frame saw. During King Yuan of Zhou’s rule, the king bid Lu-Ban and his men build a palace. According to the stories, he threatened the men with their lives if they did not finish the work on time. Because of that, they hurried to make sure their building was complete. They didn’t want to lose their heads.

In that period, men would wield axes to gather timber from the forests. They also used axes to prepare wood for building. It was grueling work and far too slow.

One day, Lu-Ban headed up the hillside to gather wood from the forest. As he struggled to clamber up the hill, he cut himself on a sharp blade of grass. According to legend, that was his inspiration for the saw and its serrated edge. 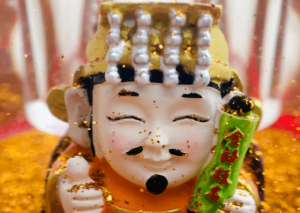 According to literature, Lu-Ban’s genius and carpentry prowess spread even to his wife.  While he was working outside, Lady Yu saw him struggling during the rainy and sunny weather. So, she created a sort of portable tent for him to work underneath to keep him dry. And that was the beginning of the umbrella.

How did Lu-Ban Become a Part of Chinese Mythology?

Lu-Ban’s skills as an engineer and woodworker were so legendary that he became almost like a god at the end of his life. Despite having been born as a man, he is now the patron saint of builders and contractors.

Perhaps a better word to describe him would be a “cultural deity” or a folk hero. He is remembered by craftsmen and artisans today.

There is some debate about whether Lu-Ban existed. Indeed his inventions tell their own story, but perhaps they were created by multiple people, not just one. He is mentioned in the Book of Origins.

However, the sheer amount of his inventions and the stories of his unmatched skill make him seem more like a god than man. He left behind information about his work in a handbook titled Lu Ban Jing.

There is some uncertainty about whether Lu-Ban wrote it or not. Some say it was written many years after his death. Either way, the book discusses building instructions on how to build various things. Within its pages, builders can find plans for tables, flowerpots, altars, and more. There are even some references to building styles that follow the ways of Feng Shui.

With modern building techniques and materials, Lu-Ban might be growing less known. We don’t need to depend on a saw or a shovel alone to create massive buildings and new inventions.

Other inventors have already created ways to save time and labor. But would things be the same without the influence of Lu-Ban? If he hadn’t completed the base of many of our modern inventions, would we have been able to progress as far as we have?

Whether Lu-Ban is real or not, there was someone who changed the building world. The debate should not be about whether he existed. Instead, the focus should be on what his name and legend brought to the world. It is the memory of Lu-Ban that we have to thank for helping civilization move forward. Because of him, society grew in terms of industry and invention.

Lu-Ban was a human man who at first hated schooling and books but soon took to it eagerly. He learned the skills necessary to become a mythical builder and innovator. His inventions will never be forgotten. Because of his success, he has inspired many others to keep building. We keep trying to make our lives better and more efficient.