Mazu: Goddess of the Seas and Patron Deity of Fishermen and Sailors 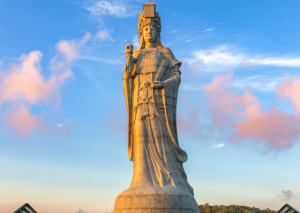 Mazu is the Chinese water goddess. Outside of China, Mazu is called the Goddess of the South China Sea as she is believed to be one of a few goddesses of the sea. Worshipped in a number of religions, including Chinese folk religion, Taoism, and various forms of Buddhism, Mazu’s characteristics are always the same as a goddess – filled with mercy, love, and kindness.

Mazu is worshipped as the patron goddess of fishermen, sailors and ocean travelers. Mazu’s popularity is greatest among coastal villages, or island-based communities. Temples and shrines to Mazu dot the shoreline every few miles in South China and are found all over the world.

Mazu is often depicted wearing vivid crimson robes. Within her robes, Mazu stitched bright and shining jewels so that can be seen by those at sea. She is also depicted with Chinese Imperial headdress to represent her status as a goddess to those looking upon her. Often, Mazu is accompanied by two guardian demons – one with a single red horn, another with two green horns.

Mazu is believed to rescue those in need and is honored as a merciful savior. However, when calling upon her for aid, it is custom to call out to her using Mazu’s less formal titles. Otherwise, she will waste time getting dressed up in her formal robes and headdress.

When families travelled long distances by sea and were graced with safe passage, it was customary to build a shrine or temple to Mazu upon new shores, hence temples to Mazu appear as far away as Los Angeles, California and Austin, Texas.

Who is Mazu in Chinese Mythology?

Unlike many gods in the Chinese pantheon, the goddess Mazu is universally believed to have been a human before becoming the goddess of the sea.

One version of her origin describes her as a human devotee of the goddess of mercy, Guanyin. Born on March 23rd in 960, Mazu was born as Lin Mo in either the village of Fujian or Meizhou. Lin Mo was born to a poor fisherman’s family and was born mute, earning her the nickname Mo Niang (Silent Girl). Although mute, she was known throughout her village as a strong swimmer and very nimble.

Due to her athleticism and dedication to her family’s strong beliefs, when Lin Mo was thirteen, she was taken on as a pupil of the village priest who began to teach her the way of the Tao. Lin Mo thrived under his teaching and excelled in a form of Chinese boxing, and while performing her martial art she would slip into trance while seeing visions of the future. Some legends state that it is at this time others began to call Lin Mo bodhisattva (a person attaining perfection but remaining on earth to help others).

Because of her beauty, many men wished to win Lin Mo’s favor. Potential suitors came from surrounding villages to see the silent martial artist. Lin Mo, however, only agreed to marry a man if he could defeat her in Chinese boxing match. Due to her mastery and perfection in her art she was never defeated, remaining unmarried until the end of her life.

In other versions of the story, Lin Mo is not a martial artist but was endowed with supernatural abilities such as being able to predict the weather and control the currents and tides. Lin Mo would regularly fall into trances and would experience visions of the future. She was also adept at medicine and became a healer in her village. Due to her giftings, Lin Mo was given over to the teachings of the Tao and dedicated herself completely to the goddess Guanyin and vowed to never marry.

One day, as her father and brothers were fishing upon the sea, a terrible storm swept in. Dark clouds blocked out the sun as the waves became large as mountains. A typhoon had caught her family out at sea. The small boat was unable to counter against the raging waters, and soon it was capsized.

As the storm surged, Lin Mo was with her mother inside of their small home and weaving clothes. Filled with dread and knowing that something had happened to her brothers and father, Lin Mo abandoned her weaving and ran out to the beach. Unable to see her family’s small boat upon the waters, she fell into a trance and projected her spirit from her body and over the ocean waters to search for her three brothers and father. She found them quickly, and her spirit pulled her brothers safely to the shore.

Lin Mo’s mother, fearful for her daughter who had ran out into the storm, began searching for her. Finding Lin Mo collapsed on the beach, her mother shook her awake, breaking the trance before Lin Mo could locate her father. He was lost at sea.

Filled with grief from her father’s death, Lin Mo climbed to the edge of a nearby cliff and leapt into the ocean. However, right before hitting the water, Lin Mo’s body transformed into radiant light and ascended to heaven as the goddess Mazu. As she rose into the clouds, the typhoon came to an end, and a rainbow appeared.

In a happier version of the tale, Lin Mo was able to save her brothers and her father. When the storm passed, tales of the incident spread throughout the coastal villages and Lin Mo soon became famous. Over the years Lin Mo worked tirelessly to help those in need, healing others supernaturally and watching over those at sea. When she was 28, she climbed to a nearby cliff and while meditating, found Tao. She then leapt off the cliff edge and became a beam of light, ascending to heaven as the goddess Mazu. 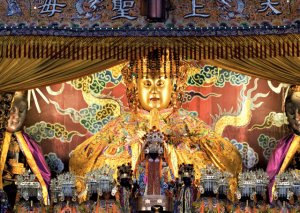 Some Taoists believe that Mazu never entered the heavens but instead decided to remain on Earth until all created beings escaped the cycle of suffering by attaining enlightenment.

It is still believed that before terrible storms Mazu will appear to warn those that live in coastal communities. She is said to appear wearing her vivid red robes on the beaches, cliffs, and water to warn sailors and those on shore that a storm is imminent. She also appears as a pure beam of light directing sailors who are lost at sea, and there have been many reports of seeing Mazu riding on a chariot of clouds to save those in need.

The Demons That Guard Mazu

Mazu is often guarded and accompanied by two demons, Shunfenger (Ears That Can Hear Wind) and Qianliyan (Eyes That Can See A Thousand Miles).

It is believed that before they became guardians, Shunfenger and Qianliyan were humans that had asked Lin Mo for her hand in marriage. As Lin Mo would only marry a man that could defeat her in combat, she challenged and defeated both men on separate occasions. After Lin Mo later attained godhood, both men vowed to protect her forever, becoming demons after Lin Mo ascended as Mazu.

In another version of the myth, Shunfenger and Qianliyan were already demons, who both desired to wed Mazu. Mazu agreed to marry both of them if they could defeat her in a Chinese boxing match. Mazu defeated them with her superior boxing style while using a magic scarf that blew sand in the demons’ eyes. Failing to defeat Mazu, Shunfenger and Qianliyan swore to serve as her guardians forever and to never leave her.

Due to her fighting prowess, many martial artists revere Mazu as Mizu Gami (the goddess of karate).

Stories of Mazu are comonly told throughout China, especially in the coastal communities, and are also common in Vietnam, China, the Phillipines, Thailand, Australia, and the Americas. It is customary for Mazu’s believers to erect shrines and temples upon reaching their destination, which has led to more temples being constructed for Mazu than any other female Chinese deity.

Mazu is celebrated with her own holiday on the third lunar moon’s 23rd day.

Mazu is the Chinese water goddess and the patron goddess of fishermen, sailors and ocean travelers. Temples and shrines to Mazu dot the shoreline every few miles in South China and are found all over the world.

More than just a beautiful deity, the sea goddess Mazu is powerful figure in the Chinese pantheon who is responsible for the safety of those who make their living and travel upon the waters. If you see her scarlet robes upon the waters, heed her warning, and prepare for the storm.