In this in-depth bio, you will learn who Shennong is, his history, and the many exploits credited to his name.

Shennong is the Chinese god regarded as the creator of agriculture, land development, and is known as the father of traditional Chinese medicine. Shennong’s name translates as Divine Farmer, and he is considered to be one of the prehistoric Three Kings of Chinese mythology.

As one of the Three Kings of ancient China, Shennong taught mankind the use of herbal drugs and remedies and created a catalogue of over three hundred and sixty five different medicines. He also gave humanity the inventions of the hoe, the axe, the plow and plowshare. He instructed the early Chinese how to dig wells, irrigate their fields, and how to recognize and store seeds.

As the creator of agriculture, Shennong also taught man how to read the sun, moon, and stars, giving them the Chinese calendar and creating the Harvest Thanksgiving Ceremony.

Shennong is often depicted with small bumps or horns on his forehead. In other representations, Shennong has the head of an ox, and sometimes a bull. It is believed that Shennong has a skull of iron or bronze, and that his stomach is transparent so he can see how herbs and tinctures that he creates affect his body.

He wears his hair long, even allowing his beard to be overgrown, and he wears a robe made from twigs, leaves, and grass.

Who is Shennong in Chinese Mythology?

As the deity of traditional Chinese medicine and agriculture, Shennong held an important role in ancient China’s development as an Empirical power. By teaching mankind how to plant and tend fields, as well as use medicine, Shennong aided in China’s move from a hunter-gatherer existence to an agrarian society. Because of this, Shennong is honored as one of China’s Three Sovereigns, prehistoric kings that became deified after their deaths.

There are numerous locations where Shennong was possibly born. Some legends place Shennong’s birthplace slightly northeast of the ancient capital of China, Xian, in the Hua Shan mountains.

Others place his birth in Fufeng, as there has been civilization in the area for over 3,000 years. Some stories put his birthplace near the east border of Shaanxi Province near the Jiang River, and others in Lishan, a mountain in Hudei Province. Lishan is also Shennong’s purported place of burial called Shennong Cave.

Shennong’s birth was the result of a beautiful princess mating with a divine dragon. Some myths state that when he was born, he had two small horns on his forehead. Other tales say he had the head of an ox, or that of a bull. But this was not all that made Shennong different from other children.

Shennong was said to have spoken in full sentences at three days old, walked at seven days old, and began plowing nearby fields at three years old. He also boasted a transparent stomach, which would soon come to be used for important work.

As Shennong grew older, he noticed that most people in his village and surrounding areas were constantly sick, poor in health, lacking in energy, and in many cases, starving. Shennong believed the weakness of the villagers was attributed to their poor diet of clams, picked fruit, and available meat. To help, Shennong began to eat of the different plants and vegetation around him and experimented with different combinations while watching their effects in his transparent stomach.

Shennong began recording the results of his experiments in his journal, the Shennong Ben Cao Jing, categorizing plants and their combinations as superior (edible and healthy), medium (medicinal use with very mild ill effect), and inferior (deadly, but able to help dramatically with proper usage).

His journal also mentioned the abundance or rarity of plants and herbs, and is considered China’s earliest pharmaceutical guide, including 365 medicines derived from plants, rocks, and animals. After using and combining hundreds of different plant varieties on himself, Shennong shared his experiments with others, teaching them how to cultivate and farm food that would benefit them.

As their diet switched from food they scavenged and instead became food they raised, such as vegetables and grains, the health of the villagers rose dramatically. Soon, the villagers began to go into the countryside, sharing their knowledge with others. Shennong’s fame spread, and soon, he began to be worshipped as a god.

– Shennong, the emperor of fire

In some interpretations of this myth, after teaching the villagers basic agricultural skills, Shennong noticed that because the villagers were converting massive amounts of land to farmland so quickly that the soil was beginning to lose its strength. Because of his experiments on hundreds of plants, Shennong realized that fire helped to purify the soil. Soon thereafter, Shennong taught his students how to clear their fields using fire, earning Shennong the name Yan Di, the Emperor of Fire. 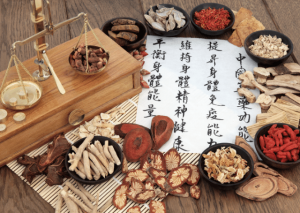 As the father of traditional Chinese medicine, Shennong is also responsible for discovering tea in 2437 BC. During his experiments with plants and herbs, burnt tea leaves from the tips of twigs were carried into the air and landed in a pot of hot water. Entranced by the unique aroma, Shennong tasted the brew and wondered at its powers. Soon Shennong began to test various teas as antidotes to poison and recorded seventy poisons that tea could counteract.

– The creation of acupuncture and medical treatments

Shennong also had the unique ability to understand the significance of pulse measurements and charted the human heart’s ability to move blood through the body. He also is credited with the creation of acupuncture, and of burning herbs such as mugwort upon the body to draw out bile and secretions.

According to the Records of the Grand Historian, Shennong was thought to be the father of the Yellow Emperor, Huangdi, who was bestowed with Shennong’s ability to create powerful medicines, along with the power to make gold and immortality.

– The death of Shennong

Shennong eventually died due to his research into plants, antidotes, and poisons. In one of his tests, he ate a poisonous yellow flower from a local weed. Before he had an opportunity to drink his special antidote tea, his intestines ruptured, killing him instantly.

Because he gave his life in the service of mankind, Shennong received special honor as Yaowang, Medicine King, and was awarded a dignified place in the Jade Emperor’s Heavenly Court.

Shennong, deified for his gifts to humanity and for his sacrifice

Shennong is the patron god of farmers and traditional Chinese medicine. While his temples are few in major metropolitan areas, it is common to find his artwork, statues and shrines throughout rural China. Pigs and sheep are offered in sacrifice to honor Shennong, and also fireworks and incense are used in his temples, especially on lunar April 26, his birthday.

In Hubei province, a nature preserve bears his name in honor – Shennongia. Known as an area for outstanding beauty and filled with an abundance and rare plants, it is not hard to imagine Shennong taking a quiet walk among its many trails and sampling its many plants.

As the lifegiving creator of agriculture, Shennong is recognized as helping China transform from a loose society of hunter-gatherers to a powerful agrarian empire. As the Father of Chinese Medicine, Shennong is responsible for improving the lives of over five thousand years of China’s people. Appearing at the dawn of China’s great history, the tale of Shennong is an enduring legend that has stood the test of time.

Belief in Shennong, the Divine Farmer, is still widespread today. His stories still thrive among the people of China, and his blessings are sought by both traditional Chinese medicine adepts and users. Methods of agriculture Shennong introduced millennia ago are still in use, and incense is still burned in his honor in temples spread throughout rural China.

One of China’s Three Sovereigns, Shennong’s still takes center stage among the people he sacrificed his life for, almost 5,000 years ago.