Xiwangmu: Queen Mother of the West who tends the Peaches of Immortality

In this in-depth bio, you will learn who Xiwangmu is, her history, and the many myths and legends credited to her name. You will also learn:

In Chinese mythology, Xiwangmu is referred to as the Queen Mother of the West. Worshipped throughout the continent of Asia, she is one of the oldest and powerful among the Chinese gods. Xiwangmu is usually associated with Taoism, even though records of her stories exist from long before Taoism became an organized religion.

Xiwangmu is the consort of the Jade Emperor and watches over the mythic Peaches of Immortality. She also holds the power of life and death in her hands and wields the powers of creation and destruction.

Popular among men and women, it was believed the mythological queen could give good fortune, long life, and was also responsible for eternal life. Xiwangmu is considered one of the most important deities in Chinese mythology, and the Chinese queen is still worshipped widely today.

The Appearance of Xiwangmu, and her many names

Once regarded as a wild mountain demon with a leopard tail and teeth of a sabre-toothed tiger, Xiwangmu was responsible for cataclysmic disasters that troubled mankind. After coming to her senses and repenting of her ways, Xiwangmu achieved enlightenment and transformed into a beautiful and benevolent goddess.

The Classic of Mountains and Oceans, tells of Xiwangmu as “the controller of the Grindstone and the Five Shards constellations of the heavens. Xiwangmu rests on a stool and wears an ornament on her head. She holds a staff. In the south, there are three birds from which Xiwangmu takes her nourishment. They are found to the north of the Kunlun mountains”.

A word for character translation of Xiwangmu’s name reveals the reverence ancient China had for her role in its culture (Xi = west; wang = emperor or god; mu = mother), as the Chinese language’s character for wang is usually reserved for male emperors and gods alone.

In contemporary Chinese beliefs Xiwangmu is referred to as Lady Queen Mother or Eternal Venerable Mother.

Who is Xiwangmu in Chinese mythology?

The earliest written accounts of Xiwangmu come from the Classic of Mountains and Seas (circa 4th century BC), even though it is likely that stories of Xiwangmu circulated for thousands of years prior to being written down. In the early writings, Xiwangmu was a malevolent demon, with a human body, a leopard’s tail, and the sharp fangs of a tiger.

It was said that she ruled over the five destructive forces and the catastrophes of the sky with the ability to cause plagues, famine, dire floods, and earthquakes. Xiwangmu, in these early myths, was married to Dongwanggong who was the King Father of the East. In some versions of this myth, Xiwangmu and Dongwanggong are the procreators of humanity.

During the time of the Tang Dynasty, depictions of Xiwangmu began to tectonically shift. Popular stories and texts began to describe Xiwangmu as a beautiful humanoid woman. She still retained the teeth of a tiger and her leopard’s tail, but she wore a headdress to hide her untamed hair. In these tales, Xiwangmu is repentant of her former ways and has thus achieved enlightenment. 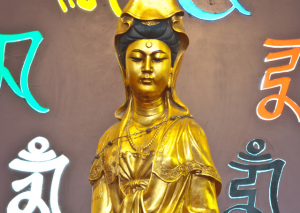 Xiwangmu came to be regarded as the highest-ranking female god in the Chinese pantheon. Instead of being depicted as being married to Dongwanggong, it soon came to be believed that Xiwangmu was married to the Jade Emperor, the first god and ruler of heaven.

While Xiwangmu and the Jade Emperor had many children, three of their daughters became very important in Chinese mythology – Zhushengniangniang (a fertility goddess who also helped couples who had difficulty conceiving), Zhinu (whose story is the basis for Chinese Valentine’s Day), and Yenkuangnianniang (the protector of the blind).

– The Importance of Xiwangmu in Chinese mythology

Xiwangmu was believed to determine the width and breadth of life for every living creature, and she controls the weather and natural disasters. Xiwangmu is the one who weaves the stars into the night sky every evening and folds them away in the morning. The Queen Mother of the West also looks over a fairy land style garden in the Jade Emperor’s palace filled with rare flowers, exotic birds, mythical beasts, every herb and plant that has ever existed, and the Peaches of Immortality, which only ripen every three thousand years.

Every year on her birthday she holds a large party in heaven and invites all the immortals to the gathering, giving them each a peach so that they may continue to live their eternal lives. If she does not offer a peach, then the immortals face certain doom.

Together, Xiwangmu and the Jade Emperor represent the ancient Chinese belief in the yin and yang. Xiwangmu is considered the embodiment of the feminine yin energy- uncontrollable, untameable, and often irrational. The Jade Emperor represents the masculine yang – rational, even-keeled, and steady. Because she is the embodiment of the sacred feminine yin energy, Xiwangmu is special to all women. In writing of the saints, Tu Kuangting wrote of the Queen Mother, “In heaven, beneath heaven, in the three worlds, and in the ten directions all women who ascend to transcendence and attain the way are her dependents.”

Because of her unwillingness to be controlled, the fact that she controls the afterlife by holding the keys to immortality, and her embodiment of feminine yin energy, Xiwangmu is held in a place of great respect and held as an example by women who do not submit to the societal norm of the submissive woman.

– The Peaches of Immortality

Xiwangmu holds the keys to eternal life, namely access to the Peaches of Immortality, also called Pantao (meaning “flat peach”). The Peaches of Immortality only grow in Xiwangu’s garden, and they only produce ripened fruit once every three thousand years. When ripened, Xiwangmu hosts a celebratory banquet where all of the immortals are invited. A smaller banquet is held every year for Xiwangmu’s birthday.

The novel Journey of the West features the most well-known legend of the Peaches of Immortality. In the story, the Monkey King is assigned by the Jade Emperor the title of Protector of the Peaches. On his first day of work, the Monkey King found that there were 3,600 peach trees in Xiwangmu’s orchard that were divided into three sections, each bestowing different powers to whoever ate them.

It was written, “The ones growing at the front have tiny blossoms and small fruits, and they ripen every three thousand years. Anyone who eats them becomes an Immortal and understands the Way, and his body becomes both light and strong. The twelve hundred in the middle have multiple blossoms and sweet fruits, and ripen every six thousand years; whoever eats them can fly and enjoy eternal youth. The back twelve hundred are streaked with purple and have pale yellow stones. They ripen once every nine thousand years, and anyone who eats them becomes as eternal as Heaven and Earth, as long−lived as the Sun and Moon”

The Monkey King could not resist the temptation before him. Thinking no one would notice until it was too late, the Monkey King stole the most rare peaches (that only ripen once every 9,000 years) and began to consume them. Soon, Xiwangmu arrived to hold the peach banquet for the retinue of heaven and sends her fairies to pick the ripened fruit.

The Monkey King, exhausted from the effort of eating all of the peaches, and realizing the trouble he will be in, made himself small to hide inside a peach. Learning that he was not invited to the party, the Monkey King makes the decision to crash the banquet. Due to eating so many of Xiwangmu’s peaches, the Monkey King became extremely powerful and caused havoc, until the Buddha defeated him and imprisoned him underneath Five Elements Mountain for 500 years.

At the end of his 500 year imprisonment, the Monkey King went on a long journey to obtain holy scriptures and as the bodyguard of the monk Tang Senzang. Rethinking his selfish acts and arrogance, the Monkey King redeemed himself and becomes enlightened, finally able to rightfully reattend the Xiwangmu’s banquet of the Peaches of Immortality.

– Xiwangmu’s interactions with Emperors of China

While Xiwangmu’s Peaches of Immortality are generally regarded for immortals only, there are legends where Xiwangmu bequeaths pantao to Chinese emperors. One legend tells of the Emperor Wu’s obsession to achieve immortality, so Xiwangmu sent a contingent to honor him with sacred white deer. And on the seventh month’s seventh night, on the date of the Oixi Festival, Xiwangmu herself stepped from the heavens to meet with Emperor Wu.

Upon meeting the Emperor, Xiwangmu presented seven peaches, giving five to Wu. After eating the peaches, Emperor Wu asked if he could keep and bury the peach seeds to grow his own Peaches of Immortality. Xiwangmu laughs and tells the Emperor that while he cannot grow the peaches himself as they take over 3,000 years to produce fruit, she would give him a list of instructions which would help him achieve immortality, if he were to follow them faithfully. Of course, Emperor Wu fails to follow her precepts, and he eventually dies.

Along with the Peaches of Immortality, Xiwangmu also occasionally honored Chinese emperors with the Mandate of Heaven, which legitimized the rule of the Emperor on earth and in the heavenly realms. Xiwangmu is the only Chinese god who could speak directly with humans as the root system of her peach trees serve as a connection between heaven and earth. However, Xiwangmu would only speak to Emperors to give them the Mandate of Heaven.

Throughout both China’s ancient and modern history, Xiwangmu has kept her place as chief female god in the Chinese pantheon. She has always been a popular god with commoners, and even ancient Taoist literature elevates her status as second to only the Three Purities, the three highest gods among Taoists.

As she is responsible for both long life and prosperity, and her daughter is responsible for fertility, Xiwangmu’s blessings are still earnestly sought by people throughout the world. In rural areas of China, it is common to hear prayers to Xiwangmu for rain and harvest, as she holds the powers of the winds and weather in her hands.

In both Chinese folk culture and Taoist religion, the autumn equinox is dedicated to Xiwangmu. Her temple, The Ancestral Temple of the Queen Mother of the West, still lies to the north end of Tianchi Heavenly Lake near Urumqi, Xinjiang, China.

Worship and veneration of the Queen Mother of the West is still celebrated today, and Xiwangmu has found her way into popular culture in video games, literature, theater, movies, and other forms of entertainment.

Xiwangmu is one of the most highly respected and potent gods of the Chinese pantheon. Admired, sought after, and loved by emperors and commoners alike, the Lady Queen Mother’s stories and depictions have endured for thousands of years.

Because of her unwillingness to be controlled, the fact that she controls the afterlife by holding the keys to immortality, and her embodiment of the feminine yin energy, Xiwangmu is held in a place of reverence by men, women, spirits, and gods.

Holding power over the immortals’ eternal livelihood with her Peaches of Immortality, and holding the power of creation and destruction in the mortal realm, Xiwangmu is a truly potent force to be reckoned with in the mythology of China.