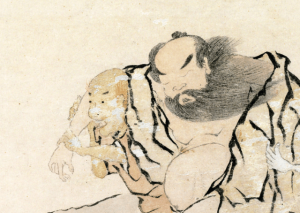 In Chinese mythology, Zhong Kui is the hunter of Chinese demons and is sometimes called the king of ghosts. A popular Chinese folk hero since the days of the Tang Dynasty (618 – 907 AD), by the Song Dynasty (960 – 1279) Zhong Kui had been adopted into the Taoist pantheon of gods.

Zhong Kui’s exploits are legendary, and due to his popularity he is regarded as a deity in multiple faiths, including those of China, Japan, Vietnam, India, and Laos. Zhong Kui was greatly feared by angry spirits and evil entities, and as the king of ghosts, was believed to command over 80,000 demons to do his bidding.

Still honored today, artwork depicting Zhong Kui is often hung or painted on entrance gates as a defense against evil forces. His blessing is also highly sought after during Chinese New Year festivities to ward off dark spirits.

Who is Zhong Kui in Chinese Mythology

The first stories of Zhong Kui, the Chinese demon hunter, began to spread during the early days of the Tang Dynasty.

Zhong Kui was born in the Zhongnan Mountains of Central China. Considered brilliant among his peers, unfortunately Zhong Kui was not blessed with good looks. As Zhong Kui grew into adulthood, he was described as having a square shaped head, bulging fish-like eyes, an over-sized mouth with wet lips, and curly hair that could not be brushed.

When it came time to take the Imperial Civil Service Exam, Zhong Kui travelled to the palace in Chang’an (modern Xian) with his friend, Du Ping. Proving his brilliance, Zhong Kui scored the highest of anyone that had ever taken the difficult exam, earning him the rank of Zhuang Yuan, which guaranteed him an elite position and great fortune.

However, because of his almost freakish appearance, the imperial ministers thought that Zhong Kui would bring shame to the empire. After taking a secret vote amongst themselves, the ministers decided to strip Zhong of his earned title of Zhuang Yuan.

Utterly devastated and dishonored, Zhong Kui decided to end his life. After being stripped of his title, he walked outside to the palace stairs and began to slam his head into the steps repeatedly, until falling dead. In another version of the tale, Zhong Kui instead bashed his head upon the palace gates until breaking his skull. After his death, his friend Du Ping buried him honorably.

After dying, Zhong Kui’s spirit descended to the underworld and was brought before King Yama, the king of hell in Chinese mythology. King Yama saw potential in Zhong Kui, as the physical and spirit realms were filled with evil entities, and the king was struggling to bring order to the chaos. Yama believed Zhong Kui could be the answer he was seeking, as Zhong Kui was both brilliant and passionate.

King Yama declared Zhong Kui as King of Ghosts and gave him the task of hunting down and capturing every evil spirit he came across, as well as power over the ghosts he captured.

A slightly different version of Zhong Kui’s mythology paints the emperor in a much better light. After hearing of Zhong Kui’s suicide, the emperor is distraught with shame that such a brilliant mind was lost due to the machinations of his ministers. He ordered the body of Zhong Kui to be interred with the ranking robes of Zhuang Yuan and restores the title to Zhong Kui posthumously.

Du Ping then buried his friend with Imperial honors. Elated, and with his honor restored, the ghost of Zhong Kui swears to protect the empire from evil spirits forever, and even gives his sister in marriage to Du Ping in gratitude.

During the Song Dynasty, the stories of the demon hunter Zhong Kui became extremely popular in Chinese literature and artwork. The most widespread tale was recorded by Shen Kuo in the text Bu Mengqi Bitan. In the story, Emperor Xuanzong became severely ill. While lying in bed, the Emperor realized that because he was so sick, he could see into the spirit realm, and soon a ghost entered his room.

In the Chinese demon’s hands were the emperor’s jade flute and a purse that belonged to the emperor’s favorite concubine. Unable to rise out of bed or cry out to stop the ghost thief, the emperor was hopeless. In that moment, a larger ghost appeared wearing the older official robes of the Tang Dynasty.

The larger ghost reached out and grabbed the ghost thief, tore out its eyes, shredded it to pieces, and ate it. With a smile the larger ghost introduced himself to the emperor as Zhong Kui, the King of Ghosts. After the emperor was healed of his sickness, he told the court painter, Wu Daozi, what he witnessed, and most of the artwork that exists today is based on this description. 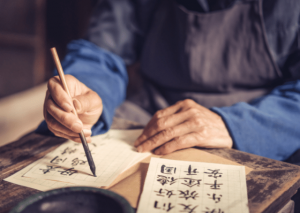 Some scholars believe that the stories of Zhong Kui grew out of an earlier tradition. Zhao Yi, in his book Gaiyu Congkao, believed that Ma Rong, of the Han Dynasty (202 BC – 220 AD) recorded the first legend of Zhong Kui. Fearing evil spirits, people would wave around or pin the Zhong Kui flower to their clothing, as they believed the flower would repel dark forces. The flower was also ground up to burn during exorcism rituals in temple settings.

It is believed that over hundreds of years, the tradition of using the flower to exorcise evil spirits was left behind as the flower became personified as the man Zhong Kui, giving birth to the legend of the demon hunter.

Zhong Kui is still recognized as a potent deity in Chinese belief systems. Depictions of Zhong Kui can be found outside of many businesses and homes throughout Asia, as it is believed he is still active in warding off evil entities. In Kyoto, representations of the King of Ghosts are hung upon rooftops and overhangs.

During Chinese New Year celebrations, Zhong Kui is called upon to watch over people’s homes and families, as well as to protect them from the ghosts of angry ancestors. Zhong Kui is also a popular figure in modern paintings and art, even appearing in operas, television programs, movies, and most recently, video games.

The Chinese folk hero, the King of Ghosts

Stories of Zhong Kui, the Chinese demon hunter, are still told among the people of Asia. A popular Chinese folk hero since the days of the Tang Dynasty , the King of Ghosts is still believed to be actively protecting those that honor him today.

Belief in Zhong Kui, the King of Ghosts, is still alive and well throughout the world. Honored and revered in folk beliefs, Taoism philosophy, and Buddhist faith, the Chinese demon hunter’s exploits are legendary. A common fixture in both ancient art and modern video games, Zhong Kui’s legends aren’t simply relegated to the past – they are finding their place in the future.