Atum: The Self-Created God Who Became Father to the Pharaohs 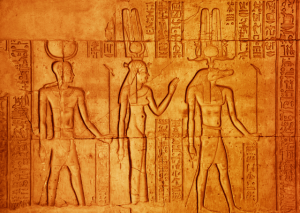 In this article, you will discover who Atum is, his history, and the myths and belief system behind his name.

You will also learn who he is in Egyptian mythology and his role as father and protector of the pharaoh. Let’s start getting to know this self-created god.

Who Is Atum in Egyptian Mythology?

In ancient Egyptian mythology, Atum was considered by his devotees to be the first god, self-created from a mound that rose from the Nu (the primordial waters before time began).

The earliest records of Atum regard him as the supreme creator deity who had the forces of the universe at his disposal. However, by the end of the Ptolemaic period, Atum’s attributes were assimilated by other gods.

Other versions of the myth featured Atum entering into sexual union with his shadow to create Shu and Tefnut or spitting Shu from his mouth and sneezing Tefnut from his nose.

Atum was initially worshipped as a creator god but came to be regarded as a solar deity. While Khepri was symbolic of the early day’s sun and Ra represented the noon-day sun, Atum represented the sun of the evening as it set in the west.

As a protector of the pharaoh, during the Old Kingdom period, it was believed that Atum was responsible for carrying the pharaoh’s soul from his tomb to the stars of Osiris’ Girdle (now known as Orion’s Belt). In rumored pharaonic initiation rituals, Atum was also responsible for infusing the pharaoh with his right to rule, bringing his power from the stars.

Representing new life and the death of light, Atum was recognized as the god of both pre- and post-existence. During the Middle Kingdom period, Atum and Khepri were often recognized together as the god Khepri-Atum to reflect the union of sunrise and sunset.

In turn, many of Atum’s roles were eventually assimilated by the gods Horus, Amun, and Ra. By the Late Kingdom period, Atum became known as Re-Atum, and very few temples were dedicated to his name.

Atum was usually represented as a human male in a seated or standing position in temple paintings and artwork. As Atum was considered a ruler over all of Egypt and protector of the royal family, he was typically depicted with a royal headdress or the unified red and white crown of Lower and Upper Egypt.

In animal form, Atum most often appeared as a serpent, especially regarding the creation of the world. According to the Egyptian Book of the Dead, at creation, Atum rose from the waters as a snake that sheds its skin every morning. In other representations, Atum appears as a bull, a lion, a lizard, or a mongoose.

The Meaning of, and Various Names of, Atum

At various points in ancient Egypt’s history, Atum (also known as Tem, Temu, Tum, or Atem) was considered the supreme deity of the Egyptian pantheon and creator god. As such, Atum’s name comes from the Egyptian verb “tm,” which is defined as “to finish” or “to perfect.”

Among his believers at Heliopolis, Atum was believed to be the primary substance of creation from chaos. All created beings (including the gods) were derived from his body and were part of his ka (life force). 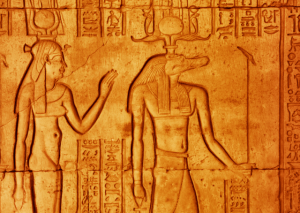 As the self-created god, Atum was considered the first deity to rise from the primordial chaos that existed before Egypt’s creation. Thus, all of creation was considered a part of Atum or emanating from him.

As he rose from chaos, Atum embodied both male and female energies and was considered the perfect balance, thus earning The Perfect State’s title. After becoming lonely, Atum created his children Shu and Tefnut from himself:

While later versions of this myth mention that Atum created his children from only his spit and sneeze, the earliest versions of Atum’s creation myth that come from the Pyramid Texts state that Atum pleasured himself and created Shu and Tefnut from his semen and spit, and from Shu and Tefnut other gods were created.

The text of Papyrus Brehmer-Rhind reads:

“All manifestations came into being after I developed … no sky existed no earth existed … I created on my own every being … my fist became my spouse … I copulated with my hand … I sneezed out Shu … I spat out Tefnut … Next Shu and Tefnut produced Geb and Nut … Geb and Nut then gave birth to Wesir (Osiris), Seth, Aset (Isis), and Nebt-Het … (Nephty) ultimately they produced the population of this land.”

After Shu (the god of the air) and Tefnut (goddess of moisture) were born, they became curious about their new surroundings and soon became lost, disappearing into the darkness of chaos.

Consumed with pain at losing his children, Atum created a messenger he called the Eye of Ra to find his young ones. After Shu and Tefnut were discovered and returned to him, Atum cried tears of joy. As these tears fell to earth, they became the first humans.

Atum, Egyptian God Who Fathered and Protected the King

As Atum was regarded as creation’s first god throughout much of ancient Egypt’s history, Atum played an important role in legitimizing the pharaoh’s reign. For example, early texts of the Book of the Dead stated that Atum immediately began ruling over everything that had emanated from himself, implying that all creation was under a hierarchical monarchy and that Atum was the first king.

Furthermore, as the pharaohs themselves were considered divine, they were a continuation and reflection of Atum’s rule, creating harmony and order in the natural and spiritual worlds.

As the first ancestor of the pharaoh, Atum was honored as the father of the king, and through Atum’s favor, the king would be protected with long life and health. Moreover, it was Atum who gave power to the king during the coronation ceremony, which ended with the pharaoh being given the title of the Living Horus.

In the temple of Amun in Jebel Barkal, hieroglyphs depict the gods Atum and Montu leading the pharaoh throughout the coronation and crowning ritual, which was believed to end with the symbolic death of the soon to be king and his resurrection, with Atum bestowing powers from the cosmos upon the king in his now resurrected and divine form.

Upon death, it was Atum who both raised the king from his tomb to return him to the stars to continue his reign and protected the king throughout his journey of the Duat (underworld).

Atum’s Role in the Afterlife

Due to his primacy in being considered by many to be the first of the gods, Atum was given a rather significant role in the Egyptian afterlife. As the god of pre- and post-creation, Atum was not just considered a solar deity but was linked to the earth and underworld as they were emanations from his creative substance.

While Atum’s primary responsibility was to protect the king, Atum was also regarded as the protector of non-royal humanity. In the Duat, Atum was believed to help protect souls from the evil that lay in wait throughout the underworld. Numerous reliefs throughout the Valley of the Kings depict Atum defeating the bloodthirsty serpents Neheb Khau and Apophis by pressing his finger through their spines, allowing souls to escape their clutches.

During the New Kingdom period, funerary depictions of Atum as a ram-headed figure began to appear, showing the deity beheading his enemies and shining the sun’s light upon them to subdue them.

As a creator god, Atum (in his earliest representations) was considered a deity of earth and sky. As the chief god of the Ennead of Heliopolis, more was written of Atum in the Pyramid Texts than any other god. And although Atum’s time of greatest worship was during the Old Kingdom period (2700 – 2200 BC), he was linked to the royal line of pharaohs throughout Egypt’s entire dynastic period.

As the sun’s role rose in importance among the Egyptians, Atum was soon associated with the sun more than the earth, especially as a creative power. Atum represented the meeting place of the earth and the sun in the west, as Atum symbolized the evening and the setting sun’s path across the sky. The rising sun became known as Nefertum (meaning young Atum), and the evening sun became depicted as an older Atum.

As the worship of Ra began to take a greater hold throughout the Egyptian empire, Ra soon became included in Atum’s Enneadic pantheon. While Nefertum and Atum were worshipped as the morning sun and the evening sun, Ra became known as the midday sun. Soon, Ra’s worship was merged with Atum’s, and the deities were worshipped together as Atum-Ra.

As the centuries progressed, Atum’s worship among the general populace was assimilated by Ra and Amun, and his role as the god of kings became occupied by Horus. As a result, Atum’s vibrant worship all but disappeared, and Atum’s temples were given to other gods and cults.

However, until the end of Egypt’s dynastic period, Atum was still considered the protector of the king and the defender of the pharaonic line until its end with the Roman occupation.

Conclusion: Atum, the Creator God Assimilated by the God of the Sun 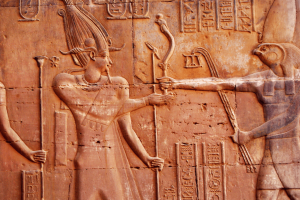 In Egyptian mythology, Atum was worshipped as the chief god of the Ennead of Heliopolis, ruling nine gods and over creation.

Believed to be the supreme deity, Atum enjoyed massive popularity and worship during Egypt’s Old Kingdom before being assimilated by the god Ra during the Ptolemaic period.

While Atum was once considered the lord creator of the universe, by the end of the Ptolemaic Dynasty in 30 BC, Atum’s worship among the public had been reduced to a mere shadow.

However, even though other deities assumed his attributes, Atum’s role in ancient Egypt’s mythology reflected the power of the sun and paved the way for the rise of Ra.