Babi: the White Backed Baboon Worshiped as a Bloodthirsty God

In this in-depth bio, you will learn who Babi is, his history, and the many myths and legends credited to his name.

Babi is the Egyptian baboon god, considered one of the most ancient deities of the Egyptian pantheon. Considered a deity of the underworld, Babi was feared as bloodthirsty and fierce, with a phallus that acted as a bolt for the doors of heaven.

The Egyptian monkey god played an essential role in the operation of the afterlife. If a soul was considered sinful after being weighed against the single feather of Ma’at, the Egyptian god Babi would hungrily devour the soul. Since this was considered an important step in the afterlife process, it was believed that Babi was one of the sons of Osiris, with some myths even indicating that Babi was Osiris’ first-born son, a position of high honor in Egyptian society.

The earliest references to Babi have been found in the Old Kingdom period of Egypt (2686 – 2181 BC), where his supernaturally aggressive traits were something that leaders wished to attain for themselves. As Babi symbolized the alpha male of a group, he therefore represented virility, even virility in the afterlife. In the afterlife if a man desired intercourse, it was common that spells and incantations featuring Babi were made on his behalf.

In ancient Egypt, baboons were associated with the dead, as baboons exhibited humanlike characteristics but were wild and without fear. The type of baboon present in ancient Egypt was the Hamadryas, and the alphas of the species had a light gray streak down their backs. These types of baboons were associated with long dead rulers and were referred to as Hez-urs (the great white one). In the Predynastic period, baboons were believed to be deceased relatives.

The bull of the baboons was known for hyper-aggressive and dominant behavior. Therefore Babi, as a god, was thought of as particularly violent and unpredictable, a bloodthirsty deity that feasted on the entrails of the unrighteous.

The earliest known depictions of Babi have been found in early Dynastic ivory tags with the mythical monkey pictured as a white-backed baboon. He is described as having red ears and a purple hind.

Babi was often pictured with a large and erect phallus, with Old Kingdom texts referring to it as Bull of the Baboons Babi. As the baboon was representative of virility, it was Babi’s phallus that was considered the door-bolt to the skies, meaning it was Babi’s erect penis that opened to door to heaven. Sometimes Babi was often depicted as the ferry boat of the underworld that fishermen trapped souls from, with Babi’s phallus being the mast of the boat.

Additionally, Babi was worshipped as a god of darkness and the moon, with his face sometimes being depicted as the man in the moon. Referred to as the Great White One, early kings identified themselves with Babi taking on the name Lord of the Night Sky.

While not a commonly known Egyptian god now, Babi was once one of the most feared gods in ancient Egypt. Babi was primarily honored at his cult center in Khmunu (Hermopolis) in the Upper Kingdom.

As baboons were deeply associated with the underworld and the dead, the cult center at Khmunu was centered around death and ancestor worship. Babi was considered a violent god, and his worship superseded that of a more peaceable and earlier baboon god known as Hedjwer.

Over the centuries, the worship of Babi was replaced with that of the god Thoth, which eventually even took over Babi’s cult center in Khmunu. Babi’s position of devourer of the dead of the unrighteous was later taken over by the crocodile headed goddess, Ammit.

Who is Babi in Egyptian mythology? 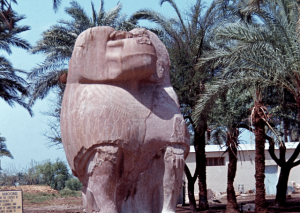 In Egyptian mythology, during the period of the Old Kingdom, Babi was known as a bloodthirsty god of the underworld (Duat) who also symbolized virility, aggression, and dominance. In Egyptian society, baboons were associated with the dead, as they were believed to be reincarnated ancestors. Babi’s role in the underworld, therefore, was as executioner and he was given the name Devourer of the Dead.

The white backed hamadryas baboon, in particular, was associated with alpha characteristics, and they were believed to be vicious reincarnations of long dead kings. The kings of the Old Kingdom held the attributes of Babi in high regard, as the first kings were often locked in wars and kingdom expansion. Babi’s virility, power, and expressed dominance were concepts to be admired, and a cult center arose in Khmunu honoring him.

As the legendary monkey was also a key component of the underworld, a great number of spells and incantations were dedicated to earning Babi’s favor in transitioning to the afterlife. To an ancient Egyptian, currying favor with Babi in life didn’t just lead to virility while living, it enabled a man to not go impotent in the afterlife.

Because Babi was associated with the judgment of the dead, some myths claim that Babi’s body was used to ferry worthy souls to Aaru, the islands of the afterlife. While his body was used as a boat, his phallus would be used as a mast to guide souls to their destination.

– Babi, the mythological monkey who devoured the dead

In ancient Egypt, baboons were equated with the realm of the underworld and the dead. As Babi was the bull of the baboons, it makes sense that he would have a prominent role in beliefs of the afterlife of the Old Kingdom.

Bull hamadryas baboons, called the Great White Ones, are considered unpredictable, aggressive, and are also omnivorous, known to lead packs to hunt and kill. Babi’s role in the afterlife was similar to the alpha in life. When a soul was brought for judgement in Duat, the soul was measured against the feather of Ma’at.

This function was so highly regarded by the ancient Egyptians, that Babi was honored as being considered the firstborn son of the god of the dead and the afterlife, Osiris.

– Babi, the ferryboat of the captured souls

In the famous coffin texts (Egyptian funerary spells found on ancient coffins dated from over 4,000 years ago), Babi is a common deity featured in incantations. Coffin texts 397 and 398 specifically mention how to identify Babi’s body as a boat, crewed by dark fishermen who sought to capture souls in the afterlife.

Spell 397 states that Babi’s phallus was the mast of the ferryboat that sailed the river of the underworld, while spell 398 identifies Babi’s body as the ferry itself. Upon the boat was a crew, captained by the god Mahaf, that used nets to trap the souls floating upon the river to the afterlife. If one was buried with the proper spells, then one had the proper knowledge to identify Babi’s boat, sating the bloodthirsty god’s anger, thus allowing one’s soul to escape the crew.

It is well known that out of all the creatures in the animal kingdom, baboons have incredibly high sex drives, with the bull baboon having the highest drive of all. Therefore, along with devouring the dead, Babi was prayed to so that one would be potent and sexually active … even in the afterlife.

Coffin Text Spell 304 was a spell for the deceased that enabled the dead to still enjoy the pleasure of copulation. In the text of the spell, the deceased would identify himself with the Lord of the Night Sky and of the moon, meaning Babi. If the spell was successful, then any woman who came under the effects of the spell would make themselves available to the spirit for sex anytime, day and night.

Babi’s virility was such a sought after trait, even kings would claim to be the phallus of Babi (Coffin Text 822), and sometimes even Babi himself (Coffin Text  359).

Baboon feces were sought after as aphrodisiacs to add into potions and salves. The feces of The Great White Ones, representative of Babi himself, were believed to carry the most power, and commanded large sums of goods and money in trade.

The mythological monkey who devoured souls

Babi is the Egyptian baboon god, considered a deity of the underworld. Babi was feared as bloodthirsty and fierce, with a phallus that acted as a bolt for the doors of heaven. Known for hyper-aggressive behavior and virility, Babi was deeply revered by the early kings of Egypt.

While considered bloodthirsty, vicious, unpredictable and fierce, Babi was one of the most feared gods of the pantheon of ancient Egypt. Yet although terrifying, the kings of ancient Egypt saw themselves in him, and desired to be him. To be the bull of the baboons, was to be respected. And to the ancient kings, to be the alpha was the ideal.