Khonsu: Egyptian God of the Moon and Time 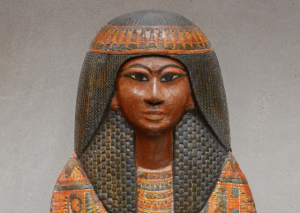 Ancient Egyptians recognized Khonsu as a god of healing. He also has attributions as a lunar deity.

In this article, we will learn more about his early history and the worship of Khonsu during late Egypt’s history.

Who Is Khonsu in Egyptian Mythology?

In ancient Egyptian mythology, Khonsu was the god of the moon, the passage of time, and the creation of life. At his primary cult center in Thebes, Khonsu was worshiped as part of a family triad with Amun as his father and his mother.

As the god of the moon and of time, Khonsu was also associated with Thoth and was often depicted as his companion.

The Meaning of Khonsu’s Name and Titles

Khonsu’s name is often translated as traveler, from the Egyptian verb “khenes” (hns) that meant “to travel” or “cross.” However, some Egyptologists believe Khonsu’s name is a transliteration of the phrase “royal placenta.”

Khonsu enjoyed widespread worship throughout Egypt as a state-sponsored deity.

Due to this, he was known by several modified names and titles:

Other than his formal titles, Khonsu was also called “The Embracer,” “The Protector,” and “The Defender.” As Khonsu was the god of the moon, he was, therefore, the god of the light at night. He was often invoked to protect those traveling in the night hours from animals and human foes.

Depictions of Khonsu in Egyptian Artwork and Literature

Khonsu was often depicted in tombs and temples as a young human male wrapped in the bandages of a mummy with a lunar disk crown upon his head. Khonsu’s crown consisted of a whole disk seated inside a crescent disk to represent the phases of the moon.

He was also typically depicted with a was scepter (a staff with an animal head at the top and a split at the bottom), or when he was linked with Horus or Osiris, he was depicted with the crook and flail (the crook represented kingship and the flail represented Egypt’s fertility).

In most depictions, such as in the Khonsu statue at his temple in Karnak, the lunar god is shown with the royal menat worn counterpoise around his neck, symbolizing the god’s virility and divine protection.

In the royal capital of Thebes, Khonsu was often pictured with the prince’s side-braid, a lock of hair that identified Khonsu holding the divine role of the child of Amun and Mut. However, in many of these depictions, Khonsu also wore the curved beard of the gods reserved for adult male rulers.

When depicted without a human face, Khonsu was often given the head of a falcon much like Horus. However, unlike Horus, Khonsu was pictured wearing his lunar crown to differentiate between them.

Outside of humanoid forms, Khonsu was identified with the baboon as the ancient Egyptians considered monkeys and baboons lunar creatures due to their habit of barking at the full moon.

While not characterized as a baboon as often as Thoth, Khonsu was associated with the animal until at least the New Kingdom (1550 – 1352 BC).

Khonsu as a Lunar Deity 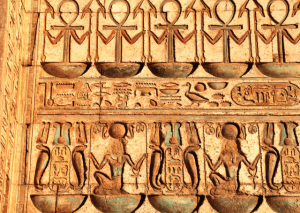 As the Egyptian god of the moon, Khonsu’s role was greater than just representing the glowing disk in the night sky. Meanwhile, as the god of the moon, he was believed to exert a powerful effect on the fertility of every living creature in Egypt.

Egypt’s priests and healers understood that the fertility cycles of animals were highly influenced by the cycles of the moon. Thus Khonsu was believed to influence the creation of new life directly.

Due to this, several temples and cults gave him an influential position during the creation of the cosmos, even titling him Greatest God of the Great Gods, where Khonsu was described as a serpent who fertilized the Egg of the Cosmos which gave birth to the world.

One of the primary attributes ascribed to Khonsu as the lunar god was the ability to wield power and offer protection for his adherents over the spirits and demons that roamed the natural world during the night. Khonsu was believed to hold power over demons that were hostile to mankind and caused sickness, disease, madness, and death.

As the god of the moon, Khonsu was also responsible for ensuring plants grew and vegetables and fruit ripened. Additionally, men and women worshipped Khonsu as the romantic god of love.

One of the more famous myths of the Ptolemaic Dynasty was the tale of the Princess of Bekhten.

In the story, the god Khonsu offered healing to an extremely ill pharaoh, Ptolemy IV. Upon being healed, the pharaoh honored the god by taking the name Ptolemy, beloved of Khonsu, who protects the pharaoh and drives away evil.

Because of the reverence that the pharaoh had for Khonsu upon his healing, it was believed that Khonsu offered to heal to the people of Egypt through the pharaoh during Ptolemy IV’s reign. Thus, between 221 – 204 BC, many Egyptians were named after the lunar god.

While he was worshipped as a benevolent lunar deity from the Middle Kingdom on, Khonsu had much darker characteristics in the early days of Egypt’s history.

In the Cannibal Hymns (from the Pyramid Texts from the Old Kingdom period (2575 – 2150 BC), Khonsu was depicted as someone assisting deceased pharaohs in defeating and devouring weaker gods so that the dead pharaoh could assimilate their strengths. Khonsu’s official title in this regard was “Khonsu who slew the lords,” who strangles them for the pharaoh, and extracts for the king what is in their bodies.

In the Coffin Texts (approximately 2134 – 2040 BC), Khonsu was referred to as “He who lives on hearts” and is credited as being able to send out the rage which burns hearts.

Khonsu was often thought of as violent and dangerous to anyone but the royal family, making him a feared deity. It was not until the Middle Kingdom period where Khonsu began to be depicted with benevolent traits as the divine son of Amun and Mut.

Worship of Khonsu From the Middle Kingdom Through the Roman Occupation

During the late Middle Kingdom through the end of the Ptolemaic Dynasty, Khonsu enjoyed state-sponsored worship throughout Egypt. Due to this, temples dedicated to Khonsu were spread across the empire, with large sanctuaries in Hibis, Edfu, Memphis, and Thebes. Khonsu’s main cult center was located in the capital of Thebes, and the Great Temple of Khonsu was built in Karnak.

As one of the gods of the Theban Triad, Khonsu was part of numerous annual temple processions. One of the largest processions was during the Festival of the New Year, which was held at the Temple of Luxor, where the statue of Khonsu would be carried on his holy barque down an avenue lined with smaller Khonsu statues.

During this procession in the time of Ramses, the sacred barque would be walked from the Temple of Khonsu to the Luxor temple, where Khonsu would be proclaimed the Greatest God of the Greatest Gods.

Khonsu, God of the Moon and Divine Protector of the Pharaoh 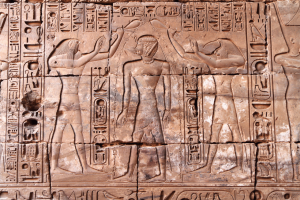 In ancient Egyptian mythology, Khonsu was worshiped as the god of the moon, the passage of time, and as a creator of life. Honored as part of a family triad, Khonsu was considered the divine son of Amun and Mut.

The worship of Khonsu greatly evolved over ancient Egypt’s history. Originally a bloodthirsty cannibal god who preyed upon weaker deities, Khonsu came to be honored as a god of creation and healing, a protector of the pharaoh, and a healer of the people. Thus, he became more than a simple lunar deity.