Ptah: the Egyptian God of Craftsmen and Architects

In this in-depth bio, you will learn who Ptah is, his history, and the many myths and legends credited to his name.

Who is Ptah in Egyptian Mythology

In the complex religion of ancient Egypt, Ptah was considered one of the mightiest deities of the Egyptian pantheon. Known as the creator god who brought all things into being, Ptah was held in special regard by the people of Egypt, and was also known as the patron god of craftsmen and architects.

Ptah was originally worshipped as the local deity of Memphis. But as the city of Memphis rose in power and became the capital of Egypt during the 1st Dynasty, the worship of Ptah surged to prominence and Ptah came to be celebrated throughout all of Egypt. As Memphis’ role expanded throughout Egypt, so did reverence for Ptah’s power.

Ptah’s companion was the warrior goddess Sekhmet. Ptah and Sekhmet together created a son, Nefertem (god of youth and the lotus blossom). Together, the three deities were called the Memphite Triad, and their cult was one of the largest of Egyptian Dynastic history.

The Importance of Ptah in Ancient Egypt

Egyptians who were a part of the Memphite Triad cult believed that Ptah was the most important of all of Egypt’s gods. Ptah was revered by his followers as the most ancient god, and therefore the creator of all things – including other deities, the sun, the earth, and was responsible for new growth and vegetation.

Various creation stories of Egyptian mythology state that Ptah made the other deities of the pantheon by imagining them in his heart and speaking them into life with his tongue. After speaking the gods into being, he then began to breath on wood, metal, and stone to make the other creatures of the cosmos. Whenever a new town, city, village, temple, or shrine was built, it was said that Ptah must have spoken them into being first, and it was Ptah’s ceremonies that were often first celebrated after breaking ground.

Ptah was called the heart and tongue of the Ennead, which were the nine gods who formed the tribunal of the Osiris Myth – Atum, Shu, Tefnut, Geb, Nut, Osiris, Isis, Nephthys, and Set. As Egyptians considered the heart and tongue to be where the human soul and the intellect were seated, effectively Ptah was revered as the greatest of the primary gods of Egypt. Further, in Memphis, Ptah was considered superior to even Atum who had created the Ennead by semen and his fingers.

As creator of all things, Ptah was also credited with the creation of the spirit world. While Khnum created mankind upon his potter’s wheel, it was Ptah who created the ka (the spirit, or particular aspect of the soul) that filled every being. Ptah was further considered the creator of all things that were good – drink, alcohol, food, and the offerings to the gods.

When the Ptolemaic Dynasty began in 305 BC and Hellenistic thought life began to intermix with that of ancient Egypt, Ptah was received and understood as the Greek concept of Logos creation – meaning in the beginning there was the word. As Ptah was before all things that began, he was self-generated, created by creating a concept in his heart and speaking himself and everything else into existence with his tongue.

The Ptolmies placed Ptah in the center of their view of Egyptian faith, for if anything was to ever be or had ever been, then it must emanate from the Logos – Ptah.

Due to his importance in the belief systems of Egypt, Ptah was given many official names.

These names have been found on monuments and in tombs throughout the empire and describe his importance in society:

Home of the soul of Ptah

The English translation of the word Egypt comes from the Egyptian word for the city of Memphis – Hiku-Ptah, which translates Home of the Soul of Ptah. When translated to ancient Greek, Hikuptah became Aiguptos, becoming Aegyptus in Latin, which then became the English word Egypt.

Therefore, whenever anyone says the word Egypt, what they are truly saying is Home of the Soul of Ptah.

The Shifting Representation of Ptah Through the Ages 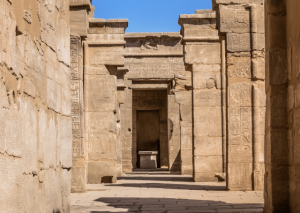 Throughout the centuries, the god Ptah took on many different forms. As Ptah was originally a small territorial god of the city of Memphis, as Memphis’ influence grew throughout the Egyptian empire, so did the power and representation of Ptah.

Originally it is believed that Ptah was represented as a naked and grotesque dwarf, one of the of the dwarven deities of the Predynastic kingdoms. Egyptologists often associate early worship of Ptah with another dwarf god named Bes, the god of childbirth. However, as reverence for Ptah grew, soon Ptah began to take on a statelier form.

By the time of the formation of the Old Kingdom and the city of Memphis becoming the capital, Ptah had taken on the characteristics of a number of other gods, namely the falcon headed Seker and the creator god Tatenen.

In Ptah taking on the characteristics of the god Seker, Ptah took on Seker’s white shroud and crown (the Atef, which also was linked to Osiris). In doing so, Ptah additionally became known as the patron of Saqqara and the sites of the royal pyramids.

Over the centuries, Ptah and Osiris were syncretically combined into a deity named Ptah-Seker-Osiris. The statue of Ptah-Seker-Osiris began to appear as a half-falcon, half-human, or sometimes as a single falcon form and began to be placed in tombs as a protection for the dead in the afterlife.

When Ptah took on the characteristics of Tatenen, Ptah became represented as a young man wearing a crown with two plumes surrounding the sun. This was seen as symbolic of the Egyptian belief of an underground fire that quakes and raises the earth. Metalworkers and blacksmiths had a particular reverence for Ptah here, not just as a creator but as a creator that created with fire.

In his Tatenen form, Ptah bore the name of Master of Ceremonies, particularly in the ritual of Heb-Sed which honored the first thirty years of a pharaoh’s reign.

Ptah as Aten and personification of Ba

During the Amarna Period (1346 – 1336 BC), the pharaoh’s residence moved to Akhetaten, as Amenhotep IV (Akhenaten) attempted to redesign the Egyptian religion to bring its many gods underneath the god Aten, the sun disc. However, loathe to leave their belief system behind, many of the Egyptian people still secretely honored Ptah during this time by simply worshiping him as the god Aten, since they shared many of the same characteristics. When Egypt’s polytheistic religious system was reinstated, Ptah still maintained some of Aten’s traits.

After the Egyptian pantheon of gods was officially restored during the reign of Tutankhamen, Ptah was often depicted in as two birds with human heads, representing the Ba (the twin gods Shu and Tefnut of Memphis). In his primary temple in Memphis, a representation of Ptah was placed within his sacred boat, which was driven in a yearly procession.

The sacred bull of Egypt, Api, is also considered the embodiment of Ptah. To the Egyptians, Api was the physical representation of Ptah’s strength, courage, and symbolized the fighting spirit of the pharaoh.

Api was kept and celebrated in Ptah’s great temple in Memphis, and upon death, the bull was buried with honors in Saqqara.

Outside of these representations, Ptah is generally depicted as a man with green skin wrapped in a shroud which sticks to his skin, with a long, straight beard, and holding the Staff of Ptah – a Was scepter with an animal head and forked bottom, an ankh, and a Djed pillar. These three elements revealed the three creative powers that Ptah wielded – might (Was); life energy (ankh); and stability (Djed).

The Power of the cult of Ptah, Egyptian god of architects

As Ptah was considered the god of craftsmen and architects, his cult quickly flourished throughout the expanding empire of Egypt. As the city of Memphis grew in power, so did it’s god, Ptah. Due to the aggressive building and artistic campaigns of the Old Kingdom, the High Priests of Ptah were aggressively sought after and empowered by the king, usually filling the role of chief architects and craftsmen.

As funeral complexes and building complexes became increasingly creative and lavish, the High Priests of Ptah soon found themselves directly under the vizier in the Egyptian chain of command and religion. It was even believed the great Imhotep, the designer of the first pyramids who became a god, was himself divinely sired by Ptah.

As the Middle Kingdom period gave way to the New, Ptah’s cult began to grow in new directions. Because of Egypt’s flourishing trade and inspired growth, skilled workers of the kingdom began calling Ptah, Ptah Who Listens to Prayers, as they believed they had been blessed beyond the natural with their skills, employment, and income.

In Memphis, Ptah’s temple enclosure wall became carved with large ears (still visible today), The Ears of Truth (or the Ears of Ptah) to express faith in the idea that Ptah heard and honored the prayers of those faithful to him, which was believed obvious to the Egyptians people due to the more comfortable lives craftsmen and architects were now leading. Many Egyptians that could, flocked to Ptah’s ever-growing cult.

During the Ramesside Period (Nineteenth Dynasty, 1292 BC to 1189 BC), Ptah came to be worshipped as one of the four great gods of the Ramesses Empire. Building campaigns exploded during this period of massive growth of the Egyptian empire. Ptah became known as the Master of Coronations and Ceremonies, and pharaohs and other high level leaders could not ascend and rule without the blessing of Ptah.

After the Ramesside Period ended and the Third Intermediate Period began, the cult of Ptah again surged forward, as Ptah became the center deity, with pharaonic coronations held within Ptah’s temple in Memphis. It became customary at this point for the High Priests of Ptah to intermarry with royal princesses, as the high cult of Ptah became increasingly intertwined with royal blood. This was continued by the successors of the ancient line of pharaohs, the Ptolmies, and continued until the fall of their dynasty with Cleopatra’s death in 30 BC.

Ptah, creator of all things

It is a mistake to simply call Ptah the god of craftsmen and architects. To many of the minds of ancient Egypt, Ptah was the creator of all things, the one who thought and spoke existence as we understand it into being.

While Ptah’s story may have begun as the worship of a small dwarven god nearly lost to time, as his city of Memphis rose to power at the dawn of Egypt, Ptah’s star rose with it, with Ptah eventually being recognized as the most powerful of all gods. Even today we honor him, for whenever we say the word Egypt, we are actually saying home of the soul of Ptah.