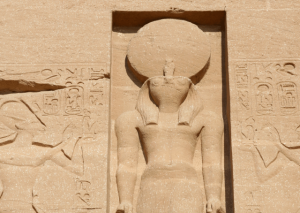 What do you know about Ra, god of the sun? What are the myths and beliefs behind his name? How was he depicted in Egyptian literature and artworks?

Continue reading to find out.

Who Is Ra in Egyptian Mythology?

Originally one of three sun gods (the other two being Khepri and Atum), Ra ruled the skies as the representative of the noonday sun. By the Fifth Dynasty of Egypt’s Old Kingdom (circa 2465 – 2320 B.C.), Ra had risen to prominence as the primary sun deity.

By the end of the Old Kingdom period in 2200 B.C., the deity of Ra had absorbed many of the attributes of Khepri and Atum, and they came to be considered mere aspects of his nature, with Khepri representing the morning sun (Ra-Khepri) and Atum representing the evening sun (Atum-Ra).

Ra’s worship spread throughout Egypt. After being given a central role in the Pyramid Texts and the Egyptian Book of the Dead, Ra was regarded as the ruler of all the cosmos – both the visible earthly realm and the invisible realm of the Duat (underworld).

During the Middle Kingdom period (2050 – 1700 B.C.), the worship of Ra was fused with that of Amun, morphing into the powerful deity Amun-Ra. During this time, the god’s popularity increased exponentially, with most gods of the Egyptian pantheon being considered mere aspects of the sun god.

Home of the Cult of Ra

Ra’s primary cult center, the “Place of Pillars,” was situated at Heliopolis in modern-day Cairo. Evidence of the sun god’s worship still stands throughout all of Egypt. Obelisks and pyramids, which are believed to represent the rays of the sun, stand as an enduring testament to Ra’s worship.

At his temple complex in Heliopolis, the priests of Ra maintained care of the revered Ished tree, also called the Tree of Life. The Egyptians believed that many of their gods were born from underneath the Ished tree and that the yellowish-green fruit that came from the tree was forbidden from human consumption, as one who consumed the fruit would live forever.

Upon assuming the throne, as part of their naming ritual, the pharaoh-to-be would be fed the fruit of the Ished Tree and thus assume eternal life. Near the Tree of Life was the Benben stone, which was the perch of Ra’s spiritual animal, the phoenix. This sculpture symbolized the soul of Ra.

While Ra’s worship endured until the rise of Christianity in the 4th century A.D., much of the veneration of Ra was replaced with that of Isis and Osiris after Egypt’s New Kingdom period.

Depictions of Ra in Egyptian Artwork and Literature 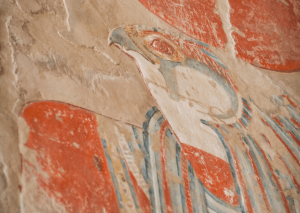 In ancient Egyptian artwork and literature, Ra was often depicted as a human with a falcon’s head, similar to the god Horus. In fact, during various periods of Egypt’s history, Horus and Ra were regarded as one god – Ra-Horakhty. In this form, Ra typically was presented wearing a solar disk on top of his head with a cobra wrapped around it.

When pictured in the sky or the underworld, Ra was most often depicted upon one of his two barges – the Mandjet or the Mesektet. During the daylight hours, Ra rode upon the Boat of Millions of Years, the Mandjet. When upon this boat, Ra was depicted with various deities, which often included Hathor (goddess of love, beauty, and pleasure), Horus (god of the sky), Sia (god of perception), Heka (goddess of magic), or Hu (god of the commanding word of creation).

At Ra’s cult center in Heliopolis, Ra was often depicted as traveling with the other eight gods of the Ennead (Shu and Tefnut, Geb and Nut, Osiris, Isis, Set, and Nephthys).

When in the Duat, Ra would be depicted upon the Mesektet, the evening boat. In these representations, Ra was typically accompanied by Mehen, a coiled snake that protected Ra from the underworld’s dangers.

The Many Artistic Versions of Ra

Various artwork discovered in ancient homes and temples throughout the Mediterranean depict the sun god as a lion, a cat, a ram, a phoenix, a beetle, a snake, and a bull. The bull was one of Ra’s most popular symbols, especially within the cult of the Mnevis Bull situated in Heliopolis.

As bulls became of age, they were sacrificed in Ra’s honor and then mummified and buried in a holy necropolis north of the city proper. It is even theorized that in the Hebrew Book of Exodus, the Hebrews attempted to erroneously symbolize their god Yahweh with that of a Mnevis Bull while Moses received the commandments from their God.

Evidence exists that Ra was also symbolized as an old king with golden skin, silver bones, and hair the color of lapis lazuli blue, which was considered a precious stone as it was imported from modern-day Afghanistan in the east. Lapis lazuli has been theorized to represent the sun god’s wisdom, spiritual awareness, and inner peace.

Beginning in the New Kingdom period and after merging with the deity Amun, Amun-Ra came to be depicted with a lion’s head and red eyes, surrounded completely by a solar disk.

In the solar temples of Egyptian cities, Ra was rarely depicted in artwork, as it was believed that the rays of the sun were symbolic of the sun god. In these open-air temples, the statuary of the sun god was replaced with that of obelisks, usually placed behind a simple carved altar.

In hieroglyph form, Ra was traditionally pictured as a seated falcon-headed god with a sun disk atop his head next to the symbol for the sun, cosmos, or Eye of Ra.

The Names of Ra and the Meanings Behind Them

The name Ra (also Re or Rei) was either a derivation of or the source of the Egyptian noun “rꜥ” meaning “day” or “sun.”

As the primary god of the Egyptian pantheon for much of ancient Egypt’s history, Ra enjoyed worship not only in Egypt but throughout northwest Africa and the Mediterranean. Because of this, Ra was known by many names and honorific titles.

Some of the more famous names of Ra were:

Beginning in the 4th Dynasty (2613 – 2494 B.C.) and until the end of pharaonic rule over 2,500 years later, pharaohs took on the title Sa-Ra, meaning “Son of Ra.” Pharaohs would also take Ra as part of their throne title.

The Story of Ra, King of Gods and Creation

The Egyptians believed that Ra created himself from the chaos (Nun) that existed before the cosmos came into being. In rising from the chaos, Ra released order and righteousness and brought form and creation to the universe. Knowing the secret names of every created entity, Ra would whisper the secret names and bring about life.

After the daughter and son of Ra were created, Ra’s children became fascinated with the dark waters of chaos and soon ventured into the blackness. After not returning home, the distraught god created a flaming eye to venture into the chaos to find his children.

The first flaming eye, the first Eye of Ra, disappeared into the darkness, searching for Shu and Tefnut. After not returning, Ra created a smaller flaming eye to light his way as he moved about creation. Soon after, the Eye of Ra returned with Shu and Tefnut, safe and sound.

Elated and crying tears of joy, Ra honored the brighter Eye of Ra with the role of the sun and gave the role of the moon to the lesser eye. As his joyful tears fell to the ground, they became the first humans. In the city of Heliopolis, these first children were called the “cattle of Ra.”

After maturing, the children of Ra went on to mate, giving birth to Nut (goddess of the sky) and Geb (god of earth). After the creation of the earth, Ra began to rule humanity and creation with righteousness and order, embodied by the goddess Maat.

However, the ancient Egyptian story “The Celestial Cow,” says that after many years of Ra’s rule, humanity began to rebel against the established order that Ra had created, bringing disharmony to creation.

Ra sent the goddess Hathor, the Eye of Ra, to the earth to bring vengeance against the disharmony mankind had unleashed. But upon arrival, Hathor became Sekhmet the lioness and began to ravage humanity with no mercy. Seeing that his creation was being slaughtered, Ra ordered Sekhmet to stand down. But the goddess, filled with bloodlust, increased her attack, even killing defenseless women and children.

Realizing he could only stop Sekhmet through trickery, Ra had 7,000 barrels of beer mixed with pomegranate juice poured upon the earth. Sekhmet, believing the beer to be blood, began to drink the concoction, soon falling drunk.

After collapsing, Hathor was able to escape the form of Sekhmet and returned to Ra’s side, ending the carnage of Sekhmet and bringing the restoration of order and righteousness to humanity.

Ra and His Path Across the Sky

As the god of the sun, Ra was believed to sail across the heavens in his solar barge during the day and at night descend into the underworld before being rebirthed in the morning.

This process served to symbolize death and resurrection to the ancient Egyptians and represent the three phases of life that the living were to move through – birth and childhood, middle age, and the frailty of later life.

As Ra traveled across the skies each day in his solar barque, the Madjet, he heard the prayers of the living and kept them in his hands. Occasionally the god of chaos, Apep, would attack Ra as a hypnotic serpent, attempting to sway Ra from his desired course.

When this would happen, Ra would either metamorphose into the cat, Mau, to defend himself or be defended by his daughter, Bast (goddess of cats). Upon reaching the western horizon, it was believed Ra would undergo a form of death and pass into the underworld through the goddess Nut.

Upon reaching the underworld, Ra would transform into the form of a ram, proceed through the dangers of the Duat to deliver the prayers of the living, and would then prepare to be reborn in the morning.

As the early morning sun, Ra was identified Khepri-Ra. Kephri was represented as a scarab-headed god, as the scarab seemed to emerge from nothing upon its birth. It is believed that as the sun rises over the horizon, it is reborn from nothing. As the sunset, Ra was identified as Atum-Ra, symbolizing the sun at dusk.

Ra, the Creator God Who Sailed as the Sun Across the Sky 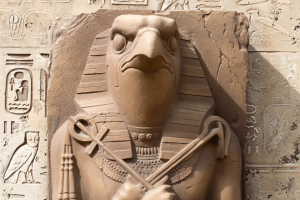 As one of the most well-known deities of the Egyptian pantheon, Ra was considered the king of the gods for much of ancient Egypt’s history. Symbolic of the sun, Ra’s powerful influence was felt upon every life in ancient Egypt for over 2,500 years.

As the primary deity of the Egyptian pantheon for thousands of years, monuments dedicated to Ra still dot the desert landscape and river valleys of ancient Egypt.

At its height, the worship of Ra approached that of modern monotheistic faiths. And his name still dominates the discussion of the mythology of ancient Egypt.