Sekhmet: Goddess of Revenge, Pestilence, and Protector of the Pharaoh

This article will discuss who Sekhmet is, her history, and the myths and beliefs surrounding her name.

Who Is Sekhmet in Egyptian Mythology?

The goddess Sekhmet (also known as Sachmis, Sekhet, Sakhmet) held a prominent place in the Egyptian pantheon as the daughter of Ra, having the role of the goddess of war and revenge.

Revered as the protector of pharaohs and the sun, Sekhmet was believed to have led the royal family into battle and was responsible for laying their enemies low.

In the afterlife, Sekhmet continued to protect the royal family by leading them through the afterlife. Additionally, Sekhmet was regarded as the goddess of plagues and pestilence but was also believed to bring healing to those that adored her.

Known as one of the most ancient of Egypt’s goddesses, Sekhmet was created as a weapon to enact Ra’s vengeance upon his enemies. Known as the Eye of Ra, Sekhmet was so dedicated to Ra’s orders that she almost wiped out the entire human race in her rage and bloodlust.

To stop Sekhmet, Ra had to deceive his daughter to quell her rage and stop her from murdering the innocent. Sekhmet was also often linked to the goddesses Hathor and Bast, the other Eyes of Ra.

Sekhmet was a state-sponsored goddess whose main cult centers stood in Memphis and later at Leontopolis. As Sekhmet was worshipped throughout the Egyptian empire, she was naturally paired with other prominent deities to express the ancient Egyptian concept of duality and balance.

As the goddess of war, destruction (revenge), and pestilence, Sekhmet was believed to be the consort of Ptah (god of architects, craftsmen, and building). Together, Ptah and Sekhmet produced the god Nefertum (god of perfume, healing aromas, and the lotus flower).

Rameses the Great regarded Sekhmet as his patron in battle. When the temple gates of Sekhmet were ordered open throughout the kingdom, it was a sign that the Egyptian military was departing for war.

In royal depictions of the Battle of Kadesh, Sekhmet was shown riding upon Rameses II’s horse, with the flames from her body (called the Nesert) devouring the king’s enemies.

Amenhotep III also believed Sekhmet favored his reign, and in response to her favor, the pharaoh built 360 statues of Sekhmet to represent each day of the year. Every morning, the priests would offer sacrifices to the day’s relevant statue to honor the goddess.

When Amenhotep III’s funerary tomb was uncovered, the most extensive collection of Sekhmet statues in Egypt’s history was discovered locked within its walls.

As the power of Memphis eventually gave way to the power of Thebes in 2000 BC, Sekhmet’s status as a state-sponsored goddess began to wane. By the New Kingdom period of ancient Egypt (1550 – 1070 BC), most of Sekhmet’s attributes had been assimilated by the goddess Mut.

By Egypt’s late period, Sekhmet had been completely absorbed and was believed to be a simple aspect of Mut.

Depictions of Sekhmet in Egyptian Artwork and Literature

In ancient Egyptian artwork, Sekhmet most often appeared as a female with the head of a lioness. In temple and funerary depictions, if dressed, Sekhmet was always covered in red to symbolize her bloodlust, sometimes decorated in a floral pattern over her breasts.

Otherwise, Sekhmet was depicted with little to no clothing. When not depicted in humanoid form, Sekhmet was pictured as a vicious lioness with exposed teeth.

Seated representations of Sekhmet often featured her wearing the Uraeus crown (an upright cobra which represented divine authority over all of Egypt) while holding an ankh (the key of life). In addition, Sekhmet often held a papyrus scepter in standing depictions, which symbolized her power over Lower Egypt (the north).

Sekhmet hieroglyphics typically illustrate the goddess as sitting and facing west, often next to the symbol for Sekhem (the scepter of power), the symbol of bread, and the solar disk.

In carvings, statues of Sekhmet are still some of the most commonly found in ancient Egypt. In the funerary temple of Amenhotep III, more than nine hundred statues of the lioness-headed goddess were discovered in the late 1900s, and in tombs throughout Egypt, statuary of the goddess was customary in funerary rites and decor.

In addition, the sarcophagi of deceased members of the royal family were often placed upon biers stylized in the image of Sekhmet (featuring her face, tail, and paws,) which represented her role as protector of the pharaonic line and bearer of the royal burden, even throughout the afterlife.

The Meaning Behind Sekhmet’s Name and Her Official Titles 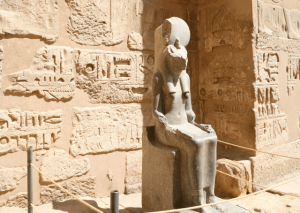 Celebrated (and dreaded) throughout Egypt, Sekhmet held a vast number of honorific titles.

Besides being known as one of the vengeful Eyes of Ra, Sekhmet was called “The One Before Whom Evil Trembles,” “Lady of Terror,” “Mistress of Dread,” “She Who Mauls,” “Lady of Slaughter,” “The Plague Bringer,” “Bringer of Ra,” “Daughter of Ra,” “Protector of the Pharaoh,” “Lady of Life,” “The Red Lady,” “Mighty One of Enchantments,” “Lady of Pestilence,” “The One Who Detests Evil and Loves Maat (righteousness),” “Destroyer of Rebellions,” “The Gracious One” and “The Flame.”

The Origin Story of Sekhmet and the Eye of Ra

The most popular story of Sekhmet began with her creation by Ra as a weapon of vengeance upon his enemies.

As humans wished to govern themselves, they conspired against Ra to end his rule on Earth and rejected his laws and the preservation of Maat (righteousness and balance). In a fit of rage, Ra dispatched the goddess Hathor from his crown and sent her to punish his enemies in the form of a lioness, thus creating Sekhmet, the first Eye of Ra.

Sekhmet was gifted with the art of destruction and violence. She viciously tore Ra’s enemies limb from limb, and the Nile River and the fields of Egypt dripped with red human blood. Filled with bloodlust, Sekhmet did not stop with Ra’s enemies but continued to feast upon the innocent – women, children, the infirm, and the vulnerable.

Ra, who was not an evil god, lamented the destruction that Sekhmet wrought upon humanity. Repenting his decision to destroy his enemies, Ra ordered Sekhmet to stop the slaughter. However, Sekhmet had developed a taste for human blood and would not cease, devouring all that she came across.

Unable to stop the carnage, Ra designed a plan to trick Sekhmet into ending her murderous rage. Ra ordered more than 7,000 buckets of beer mixed with pomegranate juice or red ocher to be poured out upon the earth. Sekhmet, believing the mixture to be human blood, began to lap up the concoction, quickly becoming drunk. After consuming vast quantities of the beer, Sekhmet soon collapsed.

Freed from the bloodlust and with humanity now saved, Hathor was able to free herself from the rage of Sekhmet. Hathor and Sekhmet split into two separate beings, with the goddess Hathor escaping Sekhmet’s form and returning to Ra.

After sleeping for three days, upon opening her eyes, Sekhmet saw the god Ptah, who was concerned for the naked goddess laying upon the ground in a pool of what appeared to be blood. Immediately falling in love with him, they copulated.

Their union produced their son Nefertum, the god of lotus flowers and healing aromatherapy, which re-established the balance of Maat upon the world.

This story was annually celebrated throughout Egypt as the Feast Day of Hathor and Sekhmet, where Egyptians drank copious amounts of beer mixed with pomegranate juice, celebrating the saving of humanity from both its rebellion against Ra and the terror of Sekhmet.

As Sekhmet’s origin story was one of the most popular myths of ancient Egypt, multiple endings to her story existed.

One of the more popular endings of Sekhmet’s origin story stated that when Sekhmet realized she had been deceived by Ra, she angrily left Egypt, carrying some of the power of the sun with her. As the sun’s power diminished, Egypt soon fell into famine, causing the world to become unbalanced as crops withered and humans and animals died.

No matter how much Ra pleaded with Sekhmet to return to Egypt to restore balance, she refused. So Ra sent the god Thoth (god of wisdom and magic) to bring her back at wit’s end. After much convincing, Thoth finally brought Sekhmet home and restored the sun’s power.

Sekhmet, Patron of Doctors and Healers

Most known for her destructive prowess, the priests of Sekhmet understood the goddess in a much different way. As Sekhmet was thought to be responsible for plagues and pestilence, her followers believed that the goddess could also remove plagues and diseases if they appeased her.

Over the centuries, the priests of Sekhmet became known as proficient doctors, dedicating themselves to research and understanding the human body, mixing their rituals with their understanding of science to create cures, potions, and medicine.

Followers of Sekhmet, and those seeking to curry her favor, would offer Sekhmet’s priests food and drinks, incense, monetary contributions, and even performed music and dance in her temples.

Mummified cats and lions were kept on hand at the Temple of Sekhmet in Memphis so that worshippers could offer direct prayers to the goddess by whispering in the mummified cat’s ears. Due to her status as both a goddess of destruction and healing, many references were made to Sekhmet in the Egyptian Book of the Dead, particularly appealing for divine protection in traversing the land of the dead. 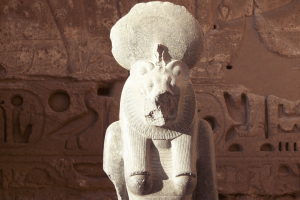 Revered as one of Egypt’s most powerful goddesses, Sekhmet was created as a weapon to enact Ra’s vengeance upon his enemies, holding dominion not just over plagues and pestilences but also over healing and miracles.

Although known for violence, bloodlust, and destruction, the goddess Sekhmet was honored as a great healer and protector of those that revered her. Greatly feared, Sekhmet was esteemed throughout Egypt’s history until assimilated by later goddesses that carried the favor of a new capital city of Egypt.

Even still, Sekhmet was worshipped for over 2,000 years, and the lion-headed goddess is still known today for her infamous rage and as protector of the pharaohs.