In this in-depth bio, you will learn who Seshat is, her history, and the many myths and legends credited to her name.

Who is Seshat in Egyptian Mythology

The goddess Seshat’s name literally means female scribe. Also known as Sefkhet-Abwy (Seven horned female scribe), Seshat was honored with several official titles such as Mistress of the House of Books, and her High Priests were given the title of Overseer of the Royal Scribes. Seshat was also given the title of Keeper of the House of Life (which included the temple library at Heliopolis, the scriptorium, and writer’s workspace), Mistress of Builders, Celestial Librarian, and Friend of the Dead.

The hieroglyph that represents Seshat is known as the mysterious Seshat Emblem. The emblem appears to be a long stem with a seven-petal flower atop it, capped with a pair of horns.

In artwork, Seshat is often dressed in the hides of cheetah or leopards draped over a robe. If Seshat is not shown with the hide, she is usually wearing a patterned dress with the patterns of a spotted cat. The pattern on the hide is thought to represent the stars of the sky (symbolizing eternity), as Seshat is often linked to the night-time sky.

In religious artwork, Seshat was often depicted with a seven-pointed emblem arched by a crescent in the form of a bow above her head whose exact meaning has been lost to time. It is from this emblem the name Sefkhet-Abwy (Seven Horned Female Scribe) derives.

Some Egyptologists believe the headdress iconography symbolized Seshat’s authority. It was common in the myths of Egypt for a victor to wear the hide of a defeated enemy to take on an enemy’s power. The stars were symbolic of the realm of the gods, and the number seven, as in multiple Mediterranean religions, stood for perfection.

Seshat wearing the skin of a cheetah or leopard may have represented Seshat’s authority over danger, as leopards and cheetahs were common apex predators in Egypt. The crescent of her headdress has been linked to representing precision and nimbleness, and as representative of divinity.

Usually, Seshat is depicted with a notched palm stem, the notches used to mark the passage of time to keep track of the allotment of time for the pharaoh, as Seshat was responsible for keeping track of the time the pharaoh was allowed to spend upon the earth. Seshat is also depicted holding knotted cords that stretch to survey land and buildings.

Beginning in the 2nd Dynasty (2890-2670 BC), Seshat was often depicted with Thoth, often as his wife, but sometimes as Thoth’s child. To complicate matters more, in some myths of the Middle Kingdom period, Seshat was considered Thoth’s sister.

As Thoth was the god of wisdom, various types of writing, and different types of sacred knowledge, it was sensible in the Egyptian mind to pair the two deities together, and this association would remain with the gods throughout Egypt’s Dynastic history.

Seshat, Stretcher of the Cord 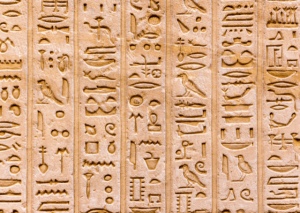 An important ritual of the pharaoh was called the Stretching of the Cord, and Seshat was the primary deity invoked during it. This Stretching of the Cord ritual was used to lay out the design and foundations of temples and other structures so that they maintained religious and sacred alignments. Seshat was necessary because it was she who had the needed skills to survey the land and boundaries.

The high priest and priestess of Seshat also directed a team of others who had been trained in the necessary arts of mathematics and surveying to set the foundations of buildings throughout the empire.

Because Seshat embodied the understanding of sacred space and temple geometry, in later mythology, Seshat was said to be the daughter of Maat, who personified the correctness and order of the cosmos.

The Many Roles of Sashet in Egyptian Society

While most modern observers know little of Seshat today, in ancient Egypt, the goddess of wisdom was venerated and highly esteemed throughout the kingdom.

Unlike other gods, Seshat did not have any temples dedicated to her name, nor did she have a formal cult center of worship. Instead, her priests and followers were spread throughout the kingdom working in conjunction with the priests of Ptah and Thoth.

The Egyptian people placed a high value on writing and record keeping, therefore Sashet was involved in the daily rituals of every single dynastic period. While not as recognizable today as Ra, Isis, or Osiris, in ancient Egypt, Sashet was one of the most commonly invoked gods of the Egyptian pantheon.

The story of Seshat

In a number of Old Kingdom myths, the god Thoth was self-created before time began, and in his ibis form, he laid an egg that creation hatched from. As part of his gift to humanity, Thoth offered his vast knowledge and the gift of writing. At that time, Egyptian writing consisted of simple pictographs, but had not yet morphed into the hieroglyphs we know today.

As Thoth was the god of wisdom, Seshat began to be viewed with these attributes as well. As she was the great scribe who kept a record of all things, a great deal of power lay at Seshat’s disposal.

The ancient Egyptians believed in an early concept of a spiritual maxim still in use today – as below, so above. What this concept means is that what is done on earth is mirrored in the heavenlies. In the mind of an Egyptian, physical existence was only part of a long journey, where death is merely an entrance to another realm.

For a scribe of Egypt, eternal life was granted to them through their writing. If a writer created a story, poem, book, or inscription, a metaphysical (ethereal) copy was given to Seshat who placed the work in the Celestial Library. Anything that was created in the mortal realm, therefore, was also immortal. It was Seshat who was responsible for maintaining this system of records, thus ensuring the eternal lives of scribes throughout the history of Egypt.

Seshat was also responsible for writing down the speeches of the pharaoh, particularly during the pharaoh’s coronation. Seshat was also responsible for transcribing the profits and losses of military campaigns, such as the number of men lost, slaves gained, and treasures won. And much like Ptah was honored during the Sed Festival, which celebrated the thirtieth year of a pharaoh’s reign, Seshat was heavily revered during this time, as it was she who kept accounts of the days of a pharaoh’s life.

Seshat and the Importance of Writing in Ancient Egypt

In ancient Egypt, the written word was considered a sacred artform. The meaning of the word hieroglyph means the sacred carvings, as the phrase the word comes from is medu-netjer, meaning the words of the god. As Seshat was the goddess of writing, she was valued and often invoked, as to write something was to bring it forth into existence. Egyptologist Rosalie David wrote:

The main purpose of writing was not decorative and it was not originally intended for literary or commercial use. Its most important function was to provide a means by which certain concepts or events could be brought into existence. The Egyptians believed that if something were committed to writing it could be repeatedly “made to happen” by means of magic.

An example of this idea is found in the writing of the Egyptian Book of the Dead. The Book of the Dead originally existed as the funerary Pyramid Texts of the Old Kingdom. If a person had the proper scrolls, glyphs, and spells written upon their tomb, then they would be able to traverse the underworld in safety. Writing the spells upon their tomb walls brought that reality into existence.

The ability to write and take stock of a person’s life and possessions was of great importance to the Egyptian people for if something could be written and accounted in the physical, then it existed in the spiritual. It also made permanent what passed from existence. So, while writing and transcribing made something in the physical, it could then make what was in the physical immortal.

If the dead were written of, they were not forgotten. If a person’s story could be written in stone or kept a record of on papyrus, then what they owned on earth would be waiting for them in the afterlife. Writing made the temporary eternal. It is for this reason that Seshat is often referred to as Friend of the Dead.

The writing of the sacred carvings were so important that entire temples were dedicated to them. In fact, the sacred hieroglyphs were so essential to the Egyptian religious experience, portions of all major temple complexes throughout Egypt were dedicated a literary convention called The House of Life, thus making the goddess Seshat a part of every temple.

Keeper of the House of Life

One of Seshat’s most common titles was that of Keeper of the House of Life. Houses of Life were found in every major temple complex throughout Egypt during the Middle Kingdom period. The House of Life was more than just a massive library, as it was a scriptorium, a writer’s workshop and training center, a publisher and distributor of documents, and one of the earliest examples of an institute of higher learning.

Called Per-Ankh (which translates as House of Life), these learning centers were always dedicated to Seshat and Thoth. No matter the deity or purpose of the temple, if the temple had a House of Life within it, Seshat and Thoth were literally thought to reside within that temple. Therefore, Seshat was considered a permanent house guest in every major temple of Egypt.

As the Keeper of the House of Life, Seshat’s role would have been to receive a copy of the texts through her priests, and then transfer it to the Celestial Library where it would be kept eternally. Egyptologist Ann Rosalie David wrote of the House of Life:

It would seem that the House of Life had both a practical use and a deeply religious significance. Its very title may reflect the power of life that was believed to exist in the divinely inspired writings composed, copied, and often stored there…In one ancient text the books in the House of Life are claimed not only to have the ability to renew life but actually to be able to provide the food and sustenance needed for the continuation of life.

While the majority of the scribes within the Houses of Life were men, there is a large amount of evidence that female scribes were common in ancient Egypt as well.

Seshat, the female scribe who measured the life of the pharaoh

While she is barely known today outside of the scholastic world of Egyptology, the goddess Seshat was considered essential for the ancient Egyptians. Believing that to write something manifested an eternal copy preserved in the spirit for all eternity, Seshat’s role as the goddess of writing was considered instrumental in daily religious and governmental life, and the afterlife.

Knowing and keeping account the days of the pharaoh, surveying the sacred foundations for all of Egypt’s structures, and keeping track of everything ever written, the goddess Seshat held the true power of the kingdom within her hands.