Shu: Egyptian God of the Air, Separator of Earth and Sky 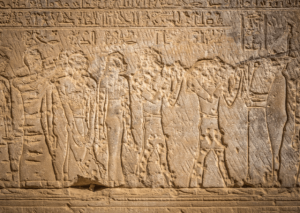 In this in-depth bio, you will find out who Shu is, his history, and the myths and legends behind his name.

You will also learn about his role in the creation myth and the afterlife.

We will start by discussing who he is in Egyptian mythology.

Who Is Shu in Egyptian Mythology

Moreover, Shu personified the separation of day and night. Thus, Shu was also responsible for separating the land of the living and the dead.

Shu was symbolic of the place of separation between earth and the heavenly realms. The air was believed to be his body, and the clouds were his bones. It was Shu who supported the ladder that souls climbed to the heavens in the afterlife, and Shu was also responsible for the life-giving air in the lungs of all creatures.

As the god of the air, Shu also ruled over the winds. As the Egyptians were a seafaring people, Shu was one of the primary gods that watched over sailors, as Shu would provide those he blessed with strong winds to maneuver their boats.

Considered one of the nine gods of Heliopolis, also called the Ennead of Heliopolis, one of Shu’s important duties was taking on the role of the Eye of Atum-Ra. Many Heliopian myths believed that Shu was the right eye of Atum-Ra and his sister was the left eye.

In these myths, Shu represented the sun, while his sister represented the moon. In marrying and procreating with his twin sister, Shu was believed to be the father of Nut and Geb and the grandfather of Nephthys, Isis, Set, and Osiris. Shu’s great-grandchildren were Anubis and Horus.

In ancient Egyptian artwork, Shu was typically represented as a man wearing a headdress of ostrich feathers, symbolizing lightness and balance, truth, and justice (similar to the goddess Maat). Usually depicted with a was scepter (a staff topped with the head of an animal and a split base end) to represent his power, Shu also carried an ankh in his left hand to symbolize life.

In temple artwork, Shu’s skin was often painted black, most likely to symbolize the belief that Atum created Shu in Nubia. Other Egyptologists theorize that Shu was painted black because Shu came into being in the darkness but sent the darkness away with his light. In temple paintings, Shu was often seen standing over the body of Geb (the earth) with his arms raised to hold Nut (the sky).

When depicted as one of the Eyes of Atum-Ra, Shu is represented as a lion. When pictured this way with Tefnut, together they were referred to as the Twin Lions. In earlier representations, Shu was depicted with the legs of a lion and the body of a man.

The Meaning of Shu’s Name

In ancient Egypt, Shu’s name was spelled “šw” and meant “he who rises up.” As Shu was created from Atum, who represented both males and females, Shu rose from Atum’s spit and semen, as Atum partnered with himself to make his children, Shu and Tefnut.

Since Shu was considered the god of the air, in the lexicon of ancient Egypt, “šw” was the root of the words “dry,” “sunlight,” “withered,” and “empty.” The Egyptian word “shua” meant “feather,” as Shu’s headdress was always depicted with one to four ostrich feathers.

Shu and the Creation Myth 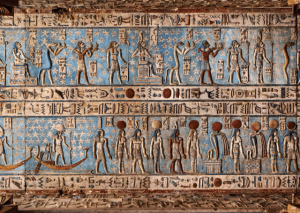 In the Egyptian creation myths of Heliopolis, Atum-Ra was the first self-created god that rose from the Nu (primordial chaos). Lonely, Atum-Ra began to pleasure himself to bring forth his seed.

As Atum-Ra was neither male nor female, once his seed fell upon the earth, he mixed it with his spit to create Shu, and after mixing his seed with mucus from a sneeze, he created Tefnut. After creating his two children, Atum-Ra announced, “thus from being one god, I became three.”

After their creation, Shu and Tefnut became curious about their new world. As the waters of the Nu were mysterious, the newly created gods could not resist exploring the primordial chaos.

After being gone for some time, Atum-Ra began to miss his children and despaired they would never return. So, creating a flaming eye (the first Eye of Atum-Ra) to light up the darkness of chaos, Atum-Ra sent his messenger into the Nu to find Shu and Tefnut.

After sending his first Eye of Atum-Ra to find his children, Atum-Ra created another eye to help him see in the darkness. Upon finding his children, the flaming eye returned, but the new eye became jealous of the old.

Upon the return of his children, Atum-Ra wept tears of joy, which upon falling to the earth, became the world’s first humans.

The Union of Shu and Tefnut

As Shu and Tefnut were the only created gods in existence, soon they begin to copulate with one another. As Shu was the god of air and Tefnut was the goddess of moisture, their union brought about twin children who represented the earth (Geb, their son) and the sky (Nut, their daughter).

Geb and Nut were born locked in an embrace, infused with one shared spirit. In love with one another, Geb and Nut refused to stay apart, and as long as they were locked together, the world could not form.

Soon, Geb and Nut gave birth to Horus, Osiris, Isis, and Set. Unable to keep them away from continued sexual liaisons, Shu stepped between Geb and Nut while they were having sex and pushed them apart. When Shu separated his children, the Egyptian concept of duality was created – good and evil, below and above, dark and light, body and mind, matter and spirit.

To keep his children separated from each other (for as long as the sky and earth were wrapped in sexual union with one another, physical life could not exist), Shu decided to hold Geb and Nut apart for all eternity.

Therefore, Shu became the dry atmosphere between earth and sky, and the mist, fog, and clouds were his bones. At the four corners of the world, Shu created four pillars to help keep Geb and Nut separated so that life throughout the earth would thrive. These pillars that separated earth and sky became known as the Pillars of Shu.

As Shu is responsible for keeping the earth and sky separated so that life can bloom, he was often referred to as the god of peace.

Shu as a Solar Deity and the Second Pharaoh

While Horus, Atum-Ra, and Amun-Ra were known as the primary solar deities of the Egyptian pantheon, Shu had a vital role to play in the sun’s daily path across the sky. As the son of Atum-Ra, Shu was responsible for daily defending Atum-Ra from the demon serpent Apep as Atum-Ra traveled across the sky and through the underworld.

According to myth, Shu inherited the throne from his father after Atum-Ra stepped down from the throne as the first king of Egypt. And while Shu’s reign was originally peaceful, the snake demon Apep saw an opportunity to try to weaken the pharaoh’s divine rule to seize power for himself. Apep’s followers schemed and plotted an attack on the throne and soon began to wage war against the second pharaoh’s kingdom.

After a great battle, Shu defeated Apep and his cult. However, during the battle, Apep poisoned Shu, making him unable to continue to serve as pharaoh. Geb, still angry at his father for stepping between himself and his sister, turned on Shu and seized control of the throne to become the third pharaoh.

After recovering from his wounds, Shu returned to his position between heaven and earth and found that Apep was continuing to stir up trouble, now attacking Atum-Ra during his daily path across the sky. Shu dedicated himself to defending his father and acted as Atum-Ra’s protection against Apep and his sinister forces.

To honor Shu’s sacrifice and role as the second pharaoh, future Egyptian pharaohs adopted his name as part of their title, claiming his divine authority as the descendant of Atum-Ra.

Shu’s Role in the Afterlife

The cult of Heliopolis believed that Shu and Tefnut were the gods who created the blueprints of the habitat of the deceased in the afterlife. As such, Shu and Tefnut held a prominent position in the hierarchy of gods of the Duat.

Shu was considered one of the primary gods of the dead and was charged with the essential role of providing food to the souls traveling the underworld hoping to reach the afterlife.

The ancient Egyptians believed that every individual would be judged upon their death by Osiris, god of death and the afterlife. When a person died, their soul would be brought before the 42 Judges, one of which was Shu.

First, the 42 Judges would speak about the soul’s experience on earth to Osiris, and then the soul’s heart would be weighed against the feather of Maat. If the heart were burdened with sin or unconfessed wrongs, then the soul would be devoured by Ammit, the crocodile-headed goddess, or Babi, the king of baboons.

However, if the heart was lighter than Maat’s feather, then the soul could climb Shu’s ladder to the heavenly realm.

Conclusion: Shu, the God Who Separated Earth From Sky and Life From Death 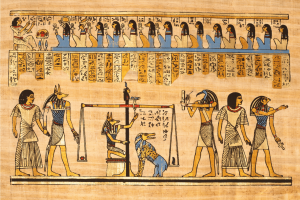 In Egyptian mythology, Shu was the god of air and the son of Atum, the primordial Egyptian god of creation. As the god of the air, Shu was responsible for the wind and the light from the sun, including the light that illuminated the darkness when the universe was created out of chaos.

In addition, Shu personified the separation of day and night. Thus, he’s responsible for separating the land of the living and the dead.

While few temples and monuments to Shu remain today, as one of the primordial gods of Egypt, Shu’s power and influence were felt for thousands of years. Believed to be the very substance of life-giving air and atmosphere, Shu was a part of every Egyptian’s life.