Sobek: The Savage Crocodile-Headed God Who Ruled the Nile 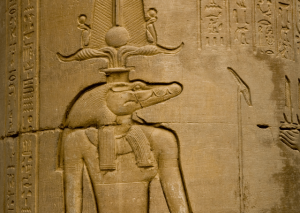 This in-depth bio will talk about Sobek and his role in Egyptian mythology.

How was he depicted in Egyptian artwork? What are the famous myths and attributes associated with his name?

Read on to find out.

Who Is Sobek in Egyptian Mythology?

In ancient Egyptian mythology, Sobek was the Egyptian crocodile god that represented strength and virility. He ruled the Niles and defended Egypt’s armies. Worshipped from Egypt’s Predynastic history through the end of the Roman occupation (3100 BC – 350 AD), Sobek enjoyed over 3,000 years of reverence as an essential water deity of the Nile River.

He was often recognized as the god of power who ate Osiris. Various cults throughout Egypt honored Sobek as one of the creators of the known world and believed that he assisted the dead in regaining their vision and awareness in the afterlife.

Sobek was believed to be the son of Set (god of storms and chaos) and Neith (goddess of war and wisdom). He was the husband of Renenutet (goddess of fortune). Some cults, such as the one at Kom Ombo, regarded Sobek as the father of Khonsu (god of the moon and of time) and Khnum (god of waters and human creation).

Due to his animalistic and sexual nature, Sobek was also worshipped as a consort of several fertility goddesses, including Tawaret (goddess of pregnancy), Heket (goddess of childbirth and fertility), and Hathor (pleasure, love, beauty, entertainment, and fertility).

Depictions of Sobek in Egyptian Artwork

Throughout ancient Egypt’s temples and tombs, Sobek was typically depicted as a man with the head of a crocodile and often wears a large plume headdress. Most representations placed an Atef crown (feathered white crown associating the god with Osiris) upon Sobek’s head or a horned sun disk (linking him with Amun-Ra).

Nearly all humanoid depictions of Sobek place a was scepter in one hand (an animal-headed staff representing royal authority) and an ankh (symbolic of the key of life) in the other.

During Egypt’s Late Period (circa 400 – 250 BC), Sobek began being pictured with the head of a falcon as Sobek’s attributes were merged with those of Ra. In this incarnation, Sobek was known as Sobek-Ra and was considered a solar deity.

The Meaning Behind Sobek’s Name

Most Egyptologists agree that Sobek’s name was either derived from or was the source of the ancient Egyptian verb s-bak, which meant to impregnate, linking Sobek to his attributes of virility and power.

Others argue that Sobek’s name evolved from the verb sbq, which translates as to bring together. In several myths, Sobek assisted Isis in gathering the body parts of Osiris so that the murdered god could be resurrected. In other versions of the Osirian myth, Sobek was believed to have devoured pieces of the scattered corpse of Osiris.

As Sobek was worshipped across Egypt, he was known by many names, including Sebek, Soknebtunis, Souxei, Sokonnokonni, Pnepheros, and Petsuchos. Even though Sobek’s worship was widespread throughout Egypt, local areas each had slightly different myths of the deity.

Some regions esteemed the god, honoring and worshipping crocodiles and giving them pools in temples, lavishing sweet treats and jewels upon them. Other locations feared Sobek and hunted crocodiles with the express intent of destroying as many as possible.

However, by the Twelfth Dynasty (1991-1786 BC), Sobek was revered throughout the Empire and adopted as a state-sponsored deity earning the titles “Lord of the Waters,” “Lord of Faiyum,” “The Rager,” “Lord of the White Crown,” and was sometimes honored as the “God of the Nile.”

Popular Attributes and Myths of Sobek 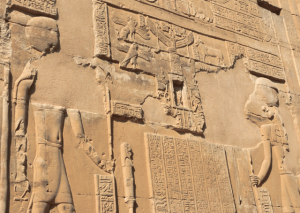 The Egyptians viewed crocodiles as vicious and aggressive. Sobek shared these traits as the crocodile-headed god, gaining a reputation as animalistic and operating on pure instinct. Because of his quick-acting and violent nature, Sobek was a favorite deity of those serving in the military. As Sobek’s role in the Egyptian pantheon evolved, he eventually was viewed as the pharaoh’s bodyguard.

Due to the preponderance of crocodiles in the Nile region, Sobek was considered a god of the Nile. In some cults, Sobek was even believed to control the waters of the Nile River and was responsible for the soil’s fertility. Furthermore, as the crocodile was viewed as an extremely sexual creature, Sobek was linked to several other fertility goddesses of ancient Egypt.

Even though the crocodile-headed god was considered a violent and confrontational deity, Sobek was not evil. On the contrary, in several myths, Sobek was spoken of as altruistic, especially when mentioned in the Osirian resurrection myths.

While in earlier Old Kingdom myths, Sobek eats Osiris. In later Middle and New Kingdom myths, Sobek assisted Isis in collecting the scattered body parts of Osiris so that the slain god would be resurrected. Because of this, Sobek became associated with healing and with the restoration of senses to the dead.

In the afterlife, Sobek was responsible for opening the eyes of the deceased so they could make their way through the underworld, as well as restoring the senses that the dead enjoyed in life.

After becoming known as a popular god of healing, Sobek soon became known as a protector of the royal line and a guardian of the upright, whose ferocity was known to frighten those who threatened evil.

Since crocodiles were known to be loyal and protective over their young, especially before being hatched, Sobek was considered nurturing and defensive of the vulnerable and innocent. At his temples throughout Faiyum, ancient Egyptians would burn candles and offer prayers in Sobek’s honor, requesting his divine protection.

The worship of Sobek can be traced to the earliest days of Egypt’s recorded history, with a number of Pyramid Texts from the Old Kingdom (circa 2700 – 2200 BC) referring to the pharaoh as the living incarnation of the crocodile-headed god.

One such text (Pyramid Text 317) stated:

“Unas is Sobek, green of plumage, with alert face and raised fore, the splashing one who came from the thigh and tail of the great goddess in the sunlight … Unas has appeared as Sobek, Neith’s son. Unas will eat with his mouth, Unas will urinate and Unas will copulate with his penis. Unas is lord of semen, who takes women from their husbands to the place Unas likes according to his heart’s fancy.”

During the Twelfth Dynasty, the pharaoh Amenemhat III moved the worship of Sobek into the mainstream of Egyptian religious life. In the Faiyum region of Egypt (a lush oasis filled with plant and animal life that lies approximately 60 miles south of Cairo), Sobek was honored as one of the primary gods of the Nile. Amenemhat III had a particular fondness for Faiyum, and as such, began several large building projects dedicated to Sobek in the region.

During the Middle Kingdom period (circa 2200 – 1650 BC), the worship of the crocodile god began to rise to prominence, as many of Sobek’s attributes were intermingled with those of the falcon-headed god Horus, with the deity becoming known as Sobek-Horus. As Horus represented divine kingship and was thought of as the ancestor of the pharaohs, many of Sobek’s aspects were brought into Egyptian royalty.

First considered a water deity due to his alignment with Horus, Sobek soon gained additional prominence as a solar deity. As the New Kingdom period ended (circa 1050 BC), the worship of Sobek-Horus began to give way to the worship of Sobek-Ra, as Ra had begun to be revered as the primary sun god of Egypt.

During this time, it was common to find references to Sobek-Ra as the primary creator deity who rose from the waters of chaos to bring life to the world. The worship of Sobek-Ra remained strong throughout the Ptolemaic Dynasty, only ending with the rise of Christianity during the days of the Roman Occupation of Egypt (circa 390 AD).

The Land of Faiyum and the Cult Centers of Sobek

One of Sobek’s most famous titles was Lord of Faiyum. The Faiyum region of ancient Egypt lay to the south of modern-day Cairo and was called the Land of the Lake. The Faiyum was believed to be under the watchful eye of Sobek, and the region in its entirety was considered the cult center of the crocodile-headed god.

It was common practice among the villages and towns of the Faiyum region to have their own stories and myths of Sobek. In this region, many of Sobek’s known names (such as Sobek Shedety, Sokonnokonni, Souxie, Soknebtunis, Petsuchos, and Pnepheros) came into vogue, as each name held slightly different attributes depending on the town or village in which Sobek’s myths were spoken.

Sobek’s cult capital was the city of Shedyet, renamed Crocodilopolis by the Greeks. Several large sanctuaries were built to Sobek. During the reign of Ptolemy II (284 – 246 BC), Crocodilopolis became the largest city in the region.

In the temples of Shedyet, crocodiles were given ornate pools within temples, were fed delicious foods and sweet treats, and were adorned with precious stones and ornate jewelry. One crocodile in the largest temple was given the title of Petsuchos (meaning Son of Sobek) and was worshipped as the incarnation of the deity.

Other important Sobek cult sites dedicated to the crocodile god were located in Nubt and Karanis. Nubt, renamed Kom Ombo during the Ptolemaic Dynasty, was a large military base in Upper Egypt that maintained control over trade routes throughout the Nubian region.

Due to this and the success of Egypt’s army, Sobek came to be regarded as the patron god of ancient Egypt’s military. As a result, a great number of mummified crocodiles have been discovered in this area, particularly at the main temple site called Per-Sobek (House of Sobek). At the height of his worship, over 52 Egyptian towns and villages had cult centers dedicated to Sobek’s name.

The Anointer of Kings

One of the essential roles of Sobek was as the anointer of the kings. When a pharaoh became king, it was believed that priests of Sobek and Anubis would raise him into divine rule by anointing him with the powers of the ankh.

Sobek, Crocodile-Headed God of the Nile

In the mythology of ancient Egypt, Sobek is the crocodile-headed god that represented strength and power, was the defender of the innocent, and was the protector of the Egyptian military.

While Sobek was not as well-known as other Egyptian gods like Isis, Ra, and Anubis, his worship spanned millennia. A water deity who later became an aspect of the sun god Ra, the crocodile-headed god held a dynamic and multi-faceted role that few other deities in the ancient Egyptian pantheon could claim.