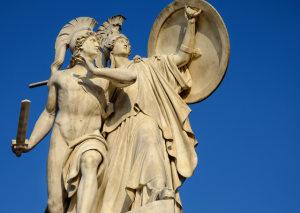 The Greek gods and goddesses are probably the most recognized pantheon of gods in the western world. Many of their names are mentioned in daily phrases, and most people in the Western world know the majority of these deities.

Their stories have been played out again and again in literature and other media. Read more to find out the names of the Greek gods and goddesses and their tales.

Aphrodite is the beautiful goddess of love, sexuality, and procreation. She was also the goddess of homosexual and heterosexual eroticism. She was filled with love and passion, but she also had a “dark” side that might come out if she was provoked. Strangely, she was married to the ugliest and most disfigured god, Hephaestus.

The well-known god of wine and revelry, and he appears young and handsome in art. Dionysus was the Greek version of Bacchus, the more well-known version. He represented the intoxication that brought about clarity, creativity, and wisdom. One of his most famous myths is that he was born twice.

Hestia was the goddess of hearth and home. She was also the protector of children, families, and domestic life in general. She was one of the early goddesses, for her brother was Zeus, and she helped overthrew her father.

Hephaestus was the deformed god of the fire and the forge. He was also the patron of all craftsmen. Even though he helped the gods in many ways with building, he was often shunned by others for his appearance. Despite his strange looks, he married Aphrodite, the most beautiful of all goddesses.

Demeter was the goddess of agriculture, seeds, and the yearly harvest. She was also one of the early gods, with Jupiter as one of her siblings. Her famous myth was linked to that of her daughter Persephone. Persephone was stolen by Hades and taken to the underworld.

This god is the god of communication, messages, and transportation. He was a trickster god, and he used his cleverness to trick the other gods and get himself out of trouble. He had many lovers, and his most famous one was Aphrodite.

Athena is the goddess of wisdom, prophecy, and battle strategy. She was one of the twelve main Greek deities, and she was connected to the state of Athens. That is where she gets her name, and she was also heavily worshipped there.

Artemis is the goddess of the hunt, the Greek version of the Roman goddess Diana. She was a virgin goddess, and she was a patron of women and protector of nature. Moreover, she was one of the daughters of Zeus, and her twin brother was the famous Apollo.

Ares is the Greek god of war, and he was also a god of aggression and violence. He represented the darker parts of combat, and he was a little loved god. However, he was quite attractive, and he had many lovers, including Aphrodite.

Apollo is the god of poetry, music, and art. He also could provide others with gifts of prophecy and was one of the most beloved gods in the pantheon. His twin sister was Artemis, and she had to help their mother give birth to him. 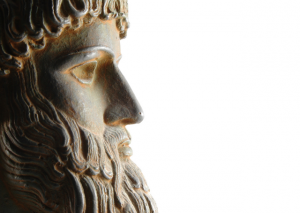 Hera was the Greek version of the Roman god Juno. She was the wife and sister of Zeus, and together, they lived atop Mount Olympus. They had children together, but Zeus had many affairs, and so, he had many other children. Hera was very jealous of these affairs, and she took revenge on many of the lovers.

Hades is the famous god of the underworld. He was one of Zeus’ brothers, and he took up his place in the underworld once he overthrew his father. His most famous story was that he stole Persephone from the world and took her down below the earth as his wife.

Poseidon is the god of the sea and storms. He had a violent temper, and the sea would match his mood. He was one of Zeus’ brothers. After they all overthrew their father, he took up his place as controller of the world’s waters.

Phobos is more like a personification of fear and panic in Greek mythology. He didn’t have much of a story to tell. However, he was the son of Ares and Aphrodite. He also had a twin brother.

Themis is perhaps more well-known as a symbol rather than by name. She is the personification of justice, order, and custom. She carries the Scales of Justice, which are always fair and balanced.

Cronus is the leader of the Titans in Greek mythology. He overthrew his own father, and then he went on to have six children, one of them being Zeus. He feared that Zeus would overthrow him too. So he swallowed four of his children, but it would prove to be his undoing.

Mnemosyne is the goddess of memory and was the mother of the famous nine Muses. Her name is the inspiration for the word “mnemonic,” which means remembrance or memory.

Prometheus is the Titan god of fire, and he was credited with the creation of humans from clay. He also stole fire from the gods and gave it to the humans. He was beloved for his dedication to the human race.

Tethys was one of the Titan women, and she was the daughter of Uranus and Gaia. However, she never played any fundamental role in Greek mythology.

Uranus is the Greek god of the sky. He was the father of Cronus, who eventually became the father of Zeus. Cronus overthrew Uranus, and in the end, Zeus also overthrew his father, Cronus. Uranus is also the seventh planet from the sun.

Gaia is like the first mother or mother goddess. She was also the personification of the earth. Together with Uranus, the god of the sky, she had the Titans. The Titans later were the ancestors of the gods of Mount Olympus that we recognize, so they were like the ancient Greek gods.

Iapetus is a Titan, another son of Uranus and Gaia. He was later father to famous gods like Atlas and Prometheus. Iapetus was connected with the biblical character of Japeth, one of the sons of Noah.

Even though Atlas was a Titan, he played a role in a few major myths in Greek mythology. His job was to hold up the earth and the heavens on his shoulders until the end of time. He had a part in the story of both Heracles and Perseus.

Rhea was a Titaness, daughter of Uranus and Gaia. Her brother was Cronus, who also became her partner. Together, they had six children: Zeus, Demeter, Hestia, Hera, Hades, and Poseidon. She was the one who came up with the trick to save her children. When Cronus began to swallow them one by one, she saved them all in the end.

Coeus was another Titan, and he was also a son of Uranus and Gaia. His other name was Polus. This was the axis around which the heavens revolved. But he really played no other role in Greek mythology.

Hyperion was another of Uranus and Gaia’s children. He was one of the most famous Titans, and with his wife, he had three children. These children were Helios (sun), Selene (moon), and Eos (dawn). Hyperion was a personification of the sun, and his fame increased later, and he was the main character in one of John Keats’ famous poems.

Crius was another of Uranus and Gaia’s children. He took part in the war between the Titans and the gods of Olympus. When they lost in battle, he joined those that were banished to the lowest level of Hades. His name was the Greek word for “ram.”

Phoebe was a Titaness who was of the first group of Titans. She was part of one of the groups of Uranus and Gaia’s children. She was also the grandmother of the twins: Apollo and Artemis. Her own brother was her lover, and together they had three children. 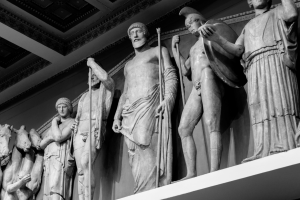 All the Greek gods and goddesses, or most of them, had detailed and interesting stories. They were also beloved in the last two centuries, especially being heavily studied and written about. Their tales were fascinating, exciting, dangerous, and full of passion. It is no surprise that the gods and goddesses of this pantheon are still remembered today.