Aphrodite: The Most Beautiful and Alluring Greek Sex Goddess

Who Is Aphrodite in Greek Mythology?

Aphrodite is the Greek goddess of sex, love and beauty in Greek mythology. She was the embodiment of all these characteristics and represented desire and sexual pleasure in all forms. She embodied both light, representing beauty, as well as dark, with an angry, violent side. Aphrodite had her moments of anger and vengeance and, just like other deities, Aphrodite’s personality was one of duality.

Aphrodite’s story had an interesting origin that affected the Greek use of her name. In Ancient Greece, they believed her name to come from the word “aphrós” which meant seafoam, due to her unique birth. But later, scholars believed this name connection was unlikely, and that her name was of Assyrian or Phoenician descent. She may have some connection to the Phoenician goddess Astarte.

Aphrodite was enchanting, seductive, and she had many lovers. Most of her myths are about her romantic and sexual escapades. Due to these escapades, she made many children with these lovers, but she didn’t have any children with her actual husband. Aphrodite represented lust, passion, sex, and she inspired these feelings in others.

– Aphrodite’s Origin: How Was Aphrodite Born?

Aphrodite didn’t have the same sort of origin story that the other gods did. She was a daughter without a mother, and Aphrodite’s father was supposedly Uranus, the first Titan. Uranus was married to Gaia, the mother goddess, and life stemmed from them. But his son, Cronus (Zeus’ father) wasn’t happy with Uranus’s ruling, and he wanted that title for himself.

When Uranus was overthrown by his son, his genitals were cut off and thrown into the sea, off the coast of Cythera. As his blood entered the sea, giants, nymphs and other creatures rose up. And through this mixture of semen and seafoam, Aphrodite was born too. This story of Aphrodite’s beginning was told by the famous poet Hesiod in his work entitled “Theogony.”

However, a lesser-known version of her origin came from the poet Homer. He claimed that Aphrodite was born from a pairing between Zeus and a Titan named Dione. However, we don’t know much about Dione at all, only that Homer claimed she was Aphrodite’s mother.

Family and Lovers of the Beautiful Greek Sex Goddess

She had no children with her husband but many with her lovers. Likely the most famous lover of Aphrodite was Ares, the god of war. With Ares, Aphrodite’s children included:

With Dionysus, god of revelry and wine, she had:

With Hermes, she had:

She had children with her other lovers as well.

Aphrodite, a Woman of Many Names and Epithets

Similar to her other godly counterparts, Aphrodite went by several names and titles. They were used to explain or portray her various aspects. These included:

Ourania and Pandemos were the titles used most often in reference to the goddess of love.

It seems strange that the beautiful goddess of love has anything to do with the old philosopher, but he does write about her in one of his books, “The Symposium.”

In this story, there is a very famous dinner scene, in which Plato is having a discussion with people about various philosophical things. He mentions Aphrodite, and that he believes that she was two separate goddesses that had merged into one. These two deities were called “Aphrodite Ouranos” and “Aphrodite Pandemos.”

Myths About Aphrodite: What Is Aphrodite Known For?

The story of Aphrodite occurred over several myths. These were mostly about her various lovers as well as her taking vengeance when she had the chance. Of course, some of these stories may have to be taken with a grain of salt. Men of ancient times and even today, enjoy putting the blame on women, if possible, and their “weakness” or “passionate anger.”

In the Roman version of the tale, Hephaestus was no Greek god of love. The ugly, deformed god of the forge born to Hera and Zeus. The story goes that when Hera saw her baby, she threw him off the mountain in anger. When Hephaestus grew up, he wanted revenge against his mother, so he trapped her in a chair that locked onto her. The only way he was going to let her out was if Zeus gave him Aphrodite to marry.

Zeus agreed, and Hephaestus and Aphrodite married, to Aphrodite’s dismay. But in the end, the marriage was a troubled one on both sides. Either it was unconsummated or not consummated very often. They didn’t have any children together, but they each had many lovers and had many children with them.

Aphrodite’s eye was caught by a young shepherd named Anchises. He lived close to Troy, and she decided to seduce him, claiming that she was a virgin to increase his desire. He became overwhelmed with lust, and they slept together. It was only then that she told him who she really was.

Because of him, she was pregnant with Aeneas who later became a lord of Troy. In the Roman stories, he was connected to the eventual founding of Rome.

– Aphrodite and Her Lover, the Most Beautiful Man

Aphrodite seduced and slept with Adonis, who was reputed to be the most beautiful of mortals. His mother was Persephone, and he would spend half his time with his mother, and the other half sleeping with Aphrodite. Aphrodite cared for him and desired him, but because of Artemis’ wrath (he had unwittingly insulted her), he was killed by a wild boar. Aphrodite was heartbroken at the loss.

Because of this tragedy, a celebration occurred called Adonia. The focus of it was Aphrodite’s grief at the loss of her lover. This celebration could only be celebrated by women.

In some creation stories, Aphrodite is the one who helped to create Pandora, the first mortal woman on earth. She made her beautiful and enticing so that she would also have men desiring her. But as the story goes, Pandora was so curious about the special box that she had. This box has sometimes been translated as a womb, and she opened it to the world.

In doing so, she let loose all the sadness and horror that the world must now experience. Some believe that this was a representation of women’s weakness and lack of morality. To give up one’s virginity could be viewed as unleashing horror upon the world — at least, in the ancient people’ mentality.

– Aphrodite and Revenge: The Island of Smelly Women

This is a story that portrayed Aphrodite’s angry, vengeful side. There was an island called Lemnos on which the women chose not to honor Aphrodite through sacrifice. She was so furious with these women that she cursed them with a smell that repulsed their husbands. The husbands didn’t want to sleep with their wives because they stunk so badly.

Not being able to sleep with their wives, the men decided to have sex with their slaves instead. The women on the island were so angry that they all murdered the husbands as well as the slaves. Then, it was only women who resided there, and they were concerned about how life would continue. A group of sailors made it to the island, and they heard about the situation.

They agreed to have sex with the women even though they smelled. The women of Lemnos were so glad that they were saved from dying out. But they also learned their lesson from a vengeful Aphrodite. However, it’s unclear whether she helped them to stop stinking or not.

– Aphrodite, the Goddess of Love, and Her Wild Jealousy

In some of her tales, we can see that she didn’t really respect the idea of virginity. It didn’t really suit her brand either. In one story, there was a man named Hippolytus. Aphrodite wanted to have sex with him, but he was a faithful worshipper of Artemis, the virgin goddess.

He spurned the idea of sex, and thus he remained a virgin himself. Aphrodite was furious, and she took offense at that, so she decided to take a little payback. Since she was the goddess of love and desire, she made Phaedra — Hippolytus’ stepmother — fall madly in love with him and ask to sleep with him. But Aphrodite knew that he’d never agree.

Phaedra asked it of him, and he refused, and Phaedra was so saddened that she committed suicide. But before she did, she wrote in her suicide note that Hippolytus had tried to rape her. Hippolytus’ father was furious at his son, and he needed to get his own revenge. So, he asked Poseidon for help.

Now that Aphrodite was out of the picture, she just let things happen as they did. Hippolytus’ father asked Poseidon to help kill his son, to which Poseidon agreed. One day, as Hippolytus was driving his chariot on the shore, a bull attacked, scaring his horses and sending the chariot into the cliffside. Hippolytus died later from his injuries.

And thus, Aphrodite’s revenge was complete. And she barely had to lift a finger.

– Aphrodite and Her Role in the Trojan War

Aphrodite, according to the tradition, played a little part at the beginning of the Trojan War as well. The myths state that the war began as the collective fault of Hera, Athena, and Aphrodite. But it was Aphrodite who did the worst thing. The goddesses had a competition, deciding which of the three was the most beautiful.

They decided that they needed someone else to choose between them, so Zeus asked Paris, Prince of Troy, to assist. The winner of the competition would get a golden apple, upon which was inscribed, “to the fairest.” Each of the goddesses showed off their naked bodies to Paris, but he didn’t want to choose. So, they resorted to bribes, and Hera offered to give him power in the political realm.

Athena told him that she would give him wisdom and glory, but Aphrodite told him that he could have the most beautiful woman in the world, Helen. Helen was wife to the King of Sparta, but Paris agreed to that gift, and Aphrodite had her kidnapped. But it was this that caused all the problems between Troy and Sparta. So, Aphrodite was to blame for starting the Trojan War, and she supported the Trojans throughout the conflict.

What Is Aphrodite’s Symbol?

Aphrodite has many symbols, especially those related to the sea or love, desire, and beauty. Her symbols could be a scallop shell, a pearl, a dolphin, or even a rose or mirror.

Most people know who the goddess of love is, and she is often represented in art as the ultimate beauty and paragon of female loveliness. In pop media she appeared in:

She is also the base of the word “aphrodisiac.” This is something used to help stimulate sexual arousal and desire. 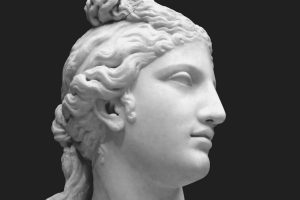 Check out the main points about the goddess of love covered in the article above: