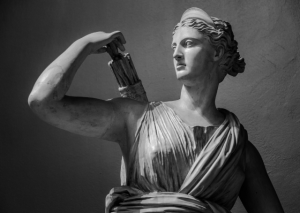 Greek Mythology contains many contradictions, none more so than the goddess Artemis. While she was best known as the goddess of the hunt, she also served as the protector of wild things.

She was associated with childbirth while she and her priestesses remained unmarried virgins. Even though she was the protector of young women, she demanded the sacrifice of Agamemnon’s daughter before the Trojan War. Why the paradox?

Likely, the opposites exist because her legends and attributes came from those of earlier goddesses. Many people also worshiped similar nature goddesses in Persia, Syria, Minoan Crete, and pre-Hellenistic areas of mainland Greece.

The most well-known of these deities is the many-breasted Artemis of Ephesus, revered as the Great Mother. In Attica (precursor of Athens), people worshipped her as the Great She-Bear, likely related to Neolithic bear cults found in the same area.

She was also associated with several Cretan goddesses, including Briomartis (goddess of mountains and hunting), Dictynna (the lady of the nets), and Eileithyia (goddess of childbirth).

As belief systems merged over time, many of these different qualities fused into the classical image of Artemis. When the Romans adopted her as Diana, they made few changes to her attributes.

As Huntress of the Olympian gods, Artemis is depicted carrying a bow and arrows given to her by the Cyclopes. Sources differ on whether the bow was gold or silver, but her arrows are gold.

She drives a golden chariot like her twin brother Apollo; hers is pulled by four golden-horned deer. In rare instances, she carries a hunting or fishing spear. In contrast to her hunting weapons, she also holds a lyre that she plays while her worshippers dance.

Though Artemis is portrayed as the goddess of all wild beasts, especially young ones, deer were sacred to her alone. Depictions often show her with a stag running beside her. In addition, the god Pan gave her several hunting dogs, but she only hunted with seven at a time.

The bear is associated with her cult at Brauron. There, all young girls were required to serve at her temple and perform rituals in the guise of bears. Artemis also favored boars since they are intelligent, fierce, and challenging to hunt.

A classical portrayal of Artemis would be of a youthful, vigorous goddess running through the forest in the moonlight, carrying a bow and arrow, accompanied by a stag or her hunting dogs.

Though accounts differ on some particulars, sources agree that Artemis and her twin brother Apollo were the Olympian god Zeus and the Titaness Leto. Angry at Zeus’s infidelity, his wife Hera forbade Leto from giving birth on the mainland. Eileithyia, the goddess of childbirth, sided with her mother, Hera, and refused to assist Leto. (In some accounts, Hera kidnapped Eileithyia so she could not serve as Leto’s midwife.)

Leto found refuge on the island of Ortygia and gave birth to Artemis. A day later, they moved to the island of Delos, where Leto had significant pain and trouble in giving birth to Apollo. Since there was no midwife for her mother, Artemis assisted with Apollo’s birth.

When Artemis was three years old, Zeus asked her what gifts she would like. Knowing her father was powerful, she asked for many things:

Because she helped her mother with childbirth, Artemis felt that the Fates had chosen her to be a midwife. She declared that she would only visit the cities of men when a woman cried out in the pain of childbirth. However, other than helping at Apollo’s birth, there is little mention of this office in myths about Artemis.

Despite her association with childbirth, Artemis herself had no children. She was known for fiercely guarding her chastity and that of any maidens devoted to her. Many of the myths about Artemis center around protecting herself from the affections of men or exacting revenge on unfaithful virgins.

Artemis had a male hunting companion named Actaeon. One day, he and his hunting dogs were roaming the woods when he accidentally spied Artemis bathing naked at a spring in the forest.

Aroused by her beauty, he tried to force himself on her, and she swiftly turned him into a stag. His own hunting dogs did not recognize him, and they chased him down and ripped him to pieces.

A similar myth relates to the tale of the death of Orion, another of Artemis’s hunting companions. Sources vary significantly on this myth; some say that Artemis killed her for making advances, while others say Apollo killed him to protect his sister’s virtue. One version relates that Apollo sent a giant scorpion to chase Orion into the sea.

Then he lied to his sister, saying that a man had raped one of her followers and was trying to swim away. Artemis shot and killed the man with an arrow and only then realized that it was Orion. To honor their friendship, she placed his body among the stars.

As one of Artemis’s most devoted female companions, Callisto also vowed to remain a virgin. Unfortunately, Zeus raped her, and she became pregnant, eventually giving birth to her son, Arcas. Enraged, Artemis banished Callisto from her group and turned her into a bear. Later, Zeus placed both Callisto and Arcas in the stars, thus creating the constellations Ursa Major and Ursa Minor.

Artemis was also responsible for defeating Otus and Ephialtes, the twin sons of Poseidon. Collectively known as the Aloadae, these mighty hunters grew to the size of giants, and they could only be killed by one another. They vowed to attack Mount Olympus and capture Hera and Artemis, forcing the goddesses to marry them. Since they could not defeat the brothers, the other gods were at a loss.

However, Artemis turned into a doe and jumped between them. They both threw their spears, missing the doe but striking and killing each other instead. 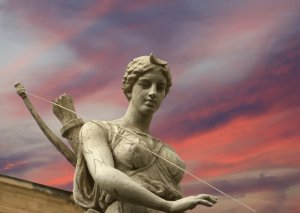 Artemis was as well known for petty disputes and vengeful deeds as any of the Olympian gods. Vanity, gossip, and neglect were sure ways to invite the goddess’s wrath.

Aura was a virgin huntress, like Artemis, and so they should have understood each other. However, Aura boasted that Artemis’s body was “too womanly,” casting doubts on the goddess’s virginity. Deeply offended, Artemis schemed with Nemesis, the goddess of divine retribution.

Through her influence, the god Dionysus fell in love with Aura, so that he raped and impregnated her. Driven to madness by his violation, she would kill every man she met. When she gave birth to two sons, she ate one, but Artemis saved the other.

While Aura received chastisement for saying Artemis was too womanly, the princess Chione was punished for the opposite. Both Hermes and Apollo fell in love with her, and she bore sons to each of them.

One day she boasted that she must be more beautiful and desirable than Artemis herself since she made two gods fall in love with her at once. Spitefully, Artemis shot an arrow at Chione, piercing her tongue so she could no longer speak such slanders. Chione died as a result of the wound.

Oeneus, King of Calydon, forgot to sacrifice to Artemis at the harvest festival. As a punishment, Artemis sent a great boar to ravage the countryside. The Caledonian Boar destroyed farmland and killed many of the villagers. Oeneus offered the boar’s hide to the hunter that drew first blood, but many brave hunters fell before the great beast. Atalanta, a favorite of Artemis, drew first blood.

Oeneus’s son, Meleager, finally killed the beast. When Meleager gave the hide to Atalanta as was her due, this sparked a family feud that ended with several dead, including Meleager himself. Scholars debate whether or not Artemis sent Atalanta to the hunt for the purpose of sowing division between the men for having to fight alongside a woman.

Artemis and the Trojan War

Artemis plays only minor roles in the Trojan War, but she sided with the Trojans because they worshipped her brother, Apollo. Among the stories that include her are two that are unique. Homer’s work tells of the one time Artemis suffered defeat, and it also names her as the only god other than Ares who demanded a human sacrifice.

As the Trojan War began, the Olympian Gods had differing opinions on which country should win the battle. Artemis favored Troy, along with Apollo, Ares, and Aphrodite. Hera, Athena, Poseidon, Hermes, and Hephaestus aided the Greeks. There was much bickering on Olympus, and one day Hera attacked Artemis, boxing her ears and sending her bow and arrows flying. Artemis fled in defeat, leaving Leto to pick up her fallen bow and arrows.

Arguably, Artemis’s most crucial role in the Trojan War involved the sacrifice of Iphigenia. Sources differ as to how King Agamemnon angered Artemis. Some say he killed a deer in one of her sacred groves; others say he omitted her when sacrificing to the gods for a swift voyage to Troy. However it happened, Artemis retaliated by setting the wind against the ships to not set sail.

A seer informed Agamemnon that they could not sail unless he offered his beautiful daughter, Iphigenia, as a sacrifice to Artemis. When the other Greek commanders demanded that he sacrifice his child or give up his command of the Greek forces, he reluctantly agreed.

He sent for Iphigenia using the lie that he planned to marry her to Achilles. When Achilles found out about the deception, he would have fought all the Greeks to protect Iphigenia, but she willingly agreed to the sacrifice.

Some sources say that, due to Iphigenia’s bravery, Artemis saved her at the last moment and made her a priestess at Tauris. However, later stories tell that Iphigenia’s mother, Clytemnestra, plotted to kill Agamemnon partly to avenge her daughter’s death.

Despite all her contradictions, or perhaps because of them, Artemis was a well-loved goddess in Greece and other Mediterranean countries, and her various aspects are easily recognizable even today.

Here’s a reminder of her main attributes:

Like all the other gods on Mount Olympus, she was prone to fallible human emotions, and many of her myths involve anger, jealousy, or revenge for perceived insults. Her worshippers could easily relate to these emotions, which helped her become even more beloved.