Dionysus: The Greek God of Wine and Passionate Master of the Vine 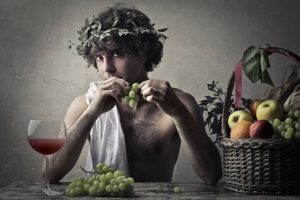 Dionysus, god of wine and revelry, was very widely worshipped in Greek culture. He was a god of music, dance, inspiration, and the frenzy that accompanies such pursuits. He is mainly known as a god of wine and master of the vine. But read on to find out about Dionysus’ strange two births.

Who Is Dionysus in Greek Mythology?

Dionysus is the god of wine, music, dancing, revelry, and religious frenzy in Greek mythology. He originated from other non-Greek areas around the Mediterranean, but he later became part of Greek culture. His Roman version is Bacchus, likely the more commonly known name. His role in mythology was as the god of freedom from social boundaries.

He was also the god of the passion that wine and music and religion inspires. One of his titles was Eleutherios, which meant “the liberator.” It was the perfect title, for that was his aim: to liberate humans and show them the “fun” that could be had when breaking boundaries. At times when people got drunk, danced to music, or experienced the frenzy of the divine, that was Dionysus’ realm of influence.

Dionysus had a strange origin having had two births or two origin stories. This makes him like the Egyptian god, Osiris. He made his mark through his strange beginnings as well as through his lovers, children, and cheerful personality. He appeared in many myths, but he is still recognized today as being most closely connected to wine.

Etymology of Dionysus, the Stranger and Outsider to Mount Olympus

Dionysus’ name first appeared around the 12th or 13th century BC in written records. It’s not entirely clear what his name meant. However, many believe that the first part of his name comes from the root word “dio.” This was a possessive form of the name “Zeus.”

The other part of his name likely comes from where he was raised. Because of his strange birth, and his bastard status, he was not allowed to live on Mount Olympus. Therefore, Dionysus’ father, Zeus, put him on Mount Nysa, where he was raised by nymphs. These nymphs were named Nysiads.

Therefore, his name means something like “the Zeus of Nysa” or “of Nysa and Zeus.”

Origin and Family of Dionysus, the God of Revelry

Because of his two births, Dionysus had two mothers. One was Persephone, the goddess of the underworld and married to Hades. His other mother was a princess of Thebes named Semele. In both stories, Zeus, the god of lightning and lord of the skies, was his father.

Like so many other gods, Dionysus had many lovers and thus many children. His most famous lovers included:

Dionysus and Aphrodite was one of his most famous pairings, along with he and Ariadne. Some of Dionysus’ children included Iacchus, god of ritual, and Comus, patron of midnight rendezvous.

Myths of Dionysus: What Is Dionysus Known For?

The story of Dionysus is an interesting one right from the beginning. The birth of Dionysus was unique because it occurred twice. Other than that, the gods would use Dionysus to assist them in making merry. He was one of the more popular gods, and who wouldn’t be, when his realm included the consumption of wine and the importance of revelry?

– How Was Dionysus Born?

Because there are two origin stories for this god, there is a lot of confusion and changes. And, of course, time and retelling can often create a little chaos in mythology. Dionysus’ first birth was the result of a union between Zeus and Persephone. Zeus snuck into the underworld, having transformed himself into a snake, and he made love to Persephone.

Dionysus’ mother number one, Persephone, became pregnant and had a child, which she would call either Zagreus or Liber. But the child had a short life because of an ongoing war between the Olympians, led by Zeus, and the Titans. They still were fighting to take the control of the universe from Zeus and, in one of the battles, Zagreus was killed and cut into bits. Zeus eventually won against the Titans, and he wanted to put his son back together.

At the time, Zeus was sleeping with Semele, who was a priestess, but he would wear a disguise. He put Zagreus’ broken heart into a concoction, and he gave it to Semele to drink. After she did, she became pregnant. Hera found out about this, and angry, she went to Semele and told her that it was Zeus she’d been sleeping with.

Killing a Priestess: The Result of Hera’s Jealous Anger 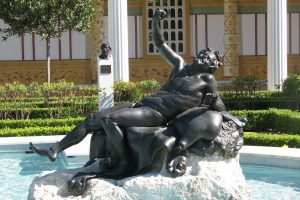 Semele went to Zeus and asked to see him in his real form, without a disguise. Zeus agreed, but when he showed her, Semele died. She was mortal, and mortals cannot look upon the true form of gods. But she was still pregnant, and Zeus had to rescue his son.

When he pulled out the baby from her, he sewed it onto his thigh. Zeus continued helping the baby to grow, and eventually, he was “born.” But Hera wouldn’t let him live on Mount Olympus with them, so Zeus gave him to nymphs on Mount Nysa. They raised him, and he became the only Greek major deity who had a mortal mother.

Because of that, he was seen as a sort of deity “outsider” by the other gods.

– Dionysus Learning His Craft as Master of the Vine

Despite not being allowed to be raised there, Dionysus did go to Mount Olympus. It was there that he gained the knowledge of vine-growing and wine-making. When Hera found out, she cursed him with madness, and he left the mountain to wander the world. He spread his knowledge of wine all over as a result.

– Dionysus and King Midas, the Power of Wine

Wine was Dionysus’ tool for enjoyment but also as a way to ease, to soothe and, in some ways, to control. In one story, his old tutor, named Silenus, was so drunk that he didn’t notice where he was walking. He ended up in the gardens of the great King Midas who welcomed the man into his home. There he stayed for days, feasting and drinking wine.

Dionysus was so grateful when King Midas eventually returned Silenus to him that he told him he’d give him anything as a gift. King Midas suggested that he be rewarded with the power to make anything he touched turn to gold. Dionysus agreed and granted Midas this perilous wish. This is the origin story of the famed “Midas’ touch.”

– Dionysus and Hephaestus, Using Wine to Save Hera

One day, Dionysus was asked to help free Hera from a trap set by her angry son, Hephaestus. Hephaestus was the deformed god of the forge, and the tale states that when Hera saw his deformation, she threw him from Mount Olympus.

Or perhaps he was so ugly at birth that she threw him down, and that was how he received his injury. Either way, Hephaestus wanted revenge and, being a blacksmith and builder, he crafted a clever trap for Hera.

It was a chair that if she sat on it would trap her in it and tighten as she moved. Once Hera was trapped, the story is told in a couple of different ways. One way was that Hephaestus asked for Aphrodite’s hand in marriage, and then he’d release Hera. In another version, Dionysus was called in to use wine to help remove Hephaestus away from his mother.

In the Dionysus version, the gods asked him to speak to Hephaestus, and he brought wine. Together they had a good time. And when Hephaestus was drunk enough, Dionysus carried him back to the gods so they could deal with him.

– The God of Wine and His Great Love, Princess Ariadne

There was once a princess with whom Dionysus fell in love, and he used wine to get to her, in a sense. While he was traveling along the beach one day, he was abducted by pirates. They assumed he was a prince, and they wanted to make money by using a ransom. As the crew set sail, though, Dionysus turned the masts of the ships into grapevines that made wine.

All the sailors drank to their heart’s content, getting so drunk that they couldn’t fight back. Then, Dionysus turned himself into a lion and ate them all. But he left one sailor alive, and this is the one who sailed him to the island of Naxos, where he found Ariadne. Ariadne had also been taken there by her kidnapper, Theseus.

He was the hero who killed the Minotaur, and he took her to the island after he killed it. Dionysus fell in love with Ariadne, and he married her. Since she was mortal, she eventually died and, when she did, he put her crown into the sky. This created the constellation of Corona.

Dionysus and Wine: The Importance of Wine to Greek Culture

Wine was a very important part of the culture in the time periods of Dionysus worship. Wine was seen as a gift given to the people by Dionysus. The vine and the wine it made was his physical incarnation on earth. The cult of Dionysus was focused on the consumption of wine for the right purposes.

Even though he later became a sort of god of hedonism in later traditions, sloppy or violent drunkenness was not the purpose or aim of this god. Dionysus focused on the “correct consumption” of the alcoholic beverage.

Wine was used to ease pain and soothe sorrow, bring joy, and bring divine inspiration. Festivals for this god later inspired the origin of drama and theatre, which later became a huge aspect of Greek culture.

Worship of Dionysus, the God of Spiritual Inspiration

Dionysus’ realm was that of the frenzy and joy that comes from intoxication, religious fervor, and celebration. He had many celebrations in his honor, and he was worshipped and revered through these festivals. Worshippers felt closer to him as they experienced these “frenzies.” Some of the celebrations/festivals in which Dionysus was worshipped include:

Because of his connection to agriculture through growing the vine, he was also linked to spring and life. In some myths and traditions, he represented the immortality that came after death. He is like his grandmother, Demeter, in that way. Both Dionysus and Demeter were connected to agriculture, renewal, and reincarnation.

What Is Dionysus’ Symbol?

In pop culture, Dionysus is often shown as always drunk or always having a good time with a cup of wine in his hand. He has appeared as a character in: 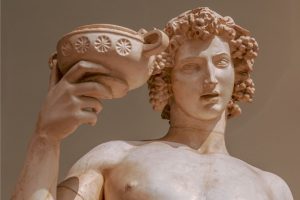 Take a look at the main points about Dionysus covered in the article above:

Dionysus is one of the most important gods in Greek mythology because of his link to wine. He brought wine to the Greeks, and it became such an important part of their culture, even today. He was also the god who encouraged breaking free and letting loose, and it was through that his people could get close to him. He likely was one of the most well-loved gods, and that makes perfect sense.