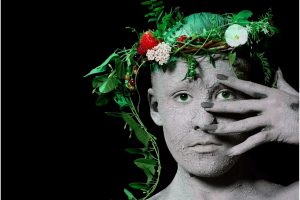 Gaia, Titan of the first generation, was mother earth in Greek mythology. She was there at the beginning of all things. Along with her son Uranus, she was the start of all life. But read on to find out how and why she begged her children to take down their father and end his reign.

Who Is Gaia in Greek Mythology?

Gaia is the mother goddess or Greek goddess of the Earth. Like the God of Christianity, she was there at the beginning of all things and, from her, all life sprung. She was more like a force instead of an actual being. She represented the earth, and she actually was the earth as well.

It is a difficult concept to grasp, but she essentially was what she represented. After she bore the gods, she became a symbol of both fertility and agriculture, both things related to life. She joined her granddaughter Demeter in being worshipped for agriculture. Gaia bore her first child, Uranus, and together they brought about life for the rest of the deities.

She bore both gods and monsters and because of her Greek mythology could actually begin. However, not all things went as well as she’d hoped. Sometimes she had to intervene so that things could be made better. Gaia’s name is still remembered today in certain groups that worship past deities.

Family of Gaia, the Mother Goddess of All

Gaia seemed to have no lover of her own to help create Uranus, her firstborn. But she had this son and took him as her lover after he was created. Gaia and Uranus created the famed gods, but later, they each had other gods/goddesses on their own or with others. With Uranus, Gaia was the mother to:

Gaia took part in a few myths. But, as mentioned before, she was more like a presence than an actual character in the stories. She represented the earth and was the earth at the same time.

Gaia’s Random Origin and Then On to Family

The famous poet Hesiod wrote “Theogony,” in which he described many aspects of Greek mythology, including the beginning of Gaia. Gaia was the first deity to be “created” out of the nothingness and the chaos that was there at the beginning of time. Her beginning is very similar to other mythologies that have “first gods,” and they simply appeared out of nowhere and nothing. After she was created, she bore her first child who later became her lover: the Titan Uranus.

With Uranus, she created the world, and she created it to her liking. Together, they bore many children. These were the Titans, and Hesiod’s writing describes it better:

“She lay with Heaven and bore deep-swirling Oceanus, Coeus and Crius and Hyperion and Iapetus, Theia and Rhea, Themis, and Mnemosyne and gold-crowned Phoebe and lovely Tethys. After them was born Cronos [Cronus] the wily, youngest and most terrible of Gaia’s children, and he hated his lusty sire.”

After that, she had the Cyclopes. Their names were Brontes, meaning “thunder,” Steropes, meaning “lightning,” and Arges, meaning “bright.” The Hecatoncheires were named Cottus, Briareos, and Gyges. She had other lovers after Uranus was overthrown, and she helped set into motion a pattern of overthrows.

– Gaia Takes Revenge Against a Cruel and Unloving Father 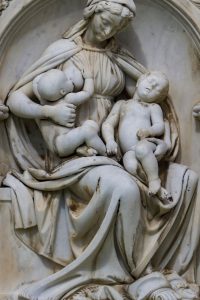 Uranus was not a good Titan. He was constantly in fear of being overthrown, and his seat in the universe being taken by one of his children. Therefore, he had no love for his children, and to keep his place protected, he threw them all into Tartarus. Tartarus was the deep abyss of the earth where souls were sent to suffer. In this sense, it was very similar to Hell.

Gaia was deeply saddened by this, and she knew she had to do something to save her children and keep them from constant abuse. So she created a sickle, and she told her children that if one of them could castrate their father, he would be overthrown, and they would be saved. Cronus, who always hated Uranus, was the one child who stepped up to the plate. Saved from Tartarus for this task, Cronus swung the sickle and cut off his father’s genitals.

He threw them into the sea, and Uranus met his end. Cronus took his place as the ruler of the universe. But even though Uranus’ time was ended, it didn’t mean that his bloodline was. From the genitals thrown into the sea, all kinds of creatures sprung. Those creatures included the beautiful goddess of love and sex, Aphrodite.

– Cronus Receives His Comeuppance, but Gaia Tries to Help

Cronus, because of what he did to his father, had the very same fears of being overthrown. He turned into just as much of a cruel and tyrannical father that his own father was. His wife and sister, Rhea, became pregnant, and he decided to swallow all the children so that they could never overthrow him. He did, one by one, but Rhea turned to Gaia for help.

They decided to hide the last child away on an island. When Rhea returned, she gave Cronus a rock in swaddling cloth to swallow. He did so, thinking it was a child. All the while, Zeus was growing stronger day by day being raised by Gaia on this island. He eventually returned, and with his grandmother’s advice, he overthrew his father and freed his siblings from his belly.

Zeus became the new king of the gods. He also became the ruler of Mount Olympus and fathered many other gods and goddesses. However, his victory was short-lived.

– Gaia and the Titanomachy, She Wasn’t Finished Yet

Zeus became the new ruler, but after he defeated his father, he threw the rest of the Titans into Tartarus, just like his grandfather had done. Gaia didn’t like this, as she had freed them once before with the help of Cronus. So, she decided to plot against her grandson this time. Because Tartarus was the embodiment of Hell as well as a sort of deity, she laid with him and bore a son named Typhon.

This was the god who sought war against Zeus in the Titanomachy. Zeus ended up freeing the Cyclops from Tartarus at the time so that they could help him fight against this god. He won in the end, and he threw the defeated Titans into Tartarus once again.

– Gaia and Her Surprise Son: Erichthonius, a Future King

Gaia, of course, didn’t have all her children with her son and lover Uranus, but this one came as a sort of surprise. It depends on the story or myth, but legend has it that the goddess of wisdom, Athena, was pursued by her brother Hephaestus.

He was the god who had helped her to emerge from her father’s forehead by splitting Zeus’ head with an ax. Because of that, he might have asked to marry her or assumed that he was owed a sexual encounter.

Either way, he tried to press himself upon Athena. But Athena fought back. Just as he was about to ejaculate, Athena pushed him away, and Hephaestus sent his seed into the ground. Since Gaia was the earth, she was impregnated by this, and she bore a son named Erichthonius.

Athena was forever a virgin goddess, but Gaia gave Erichthonius to her to raise as her adopted son. And Erichthonius would later become an early king of Athens.

– Gaia, the Mother Goddess, as Represented in Artwork

Gaia was most often represented in this role, as the mother of Erichthonius, giving her son to Athena. She was also often shown as a matronly woman, portraying her mother goddess aspect, or she was seen lying upon the earth.

How Was Gaia Worshipped?

Gaia’s cult mainly worshipped her under the name of “Anesidora” which meant “giver of gifts.” She and Demeter were worshipped together as goddesses of fertility and agriculture. Because she was a goddess of the earth, it was important that black animals were sacrificed to her.

Gaia still has a legacy today and appears in some pop culture: 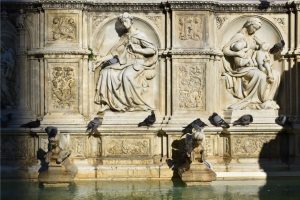 Take a look at the main points about Gaia covered in the article above:

How can we forget the Titan goddess who started it all? Gaia’s legacy lives on because she was the spark of life that set everything into being. It’s too bad that she wasn’t always happy with the way things turned out, but that’s no surprise. Her descendants made a mess of things, and even though they were deities, they were also so very human.