Hephaestus: The Greek God of Fire and the Master of Metallurgy 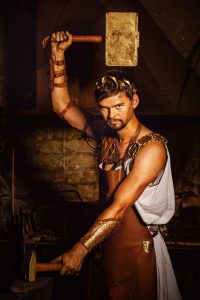 Hephaestus, god of the forge and fire in Greek mythology, was the ugliest god in the pantheon. It’s what he’s best known for as well as his skill as a blacksmith and metalworker. Because of that, he was a patron of artisans and master of metallurgy. Read this to find out how he became deformed yet was married to the most beautiful goddess.

Who Is Hephaestus in Greek Mythology?

Hephaestus is the Greek god of fire and the forge in Greek mythology. He is one of the twelve main deities in the Greek pantheon, and his Roman counterpart is Vulcan. He was Hera’s son, and it’s debated whether he was Zeus’ son as well. Unfortunately, he was an ugly god, and — allegedly because of Hephaestus’ mother, whether that was Hera or another goddess — he was deformed and lame in one leg.

This brought him some popularity with mortals because he wasn’t so perfect and beautiful like the other gods on Mount Olympus. Hephaestus had skills with fire and the forge, and he could make weapons and other metal items. He gained this skill all because he was thrown down from Mount Olympus (supposedly) by his mother. It was there on the mountain that he created his forge.

Hephaestus represented the feeling of being unwanted and unloved by others. He showed the side of the gods that wasn’t as pretty or accepting. Hephaestus’ myths were mostly centered around his abilities as well as his deformity. But even though he was mostly unloved, he was still an important Greek deity.

Etymology and Epithets of Hephaestus, Greek God of Fire

There is no real meaning of the word “Hephaestus.” It doesn’t reveal anything about this god’s character or personality. However, this god did go by many other epithets or titles which did reveal his personality. These included:

What Is Hephaestus Known For?

Hephaestus is known for his deformity. While he was ugly overall, he was mostly seen as being deformed because of his foot. This was likely because his mother threw him from the mountain when he was born. He was also known for his skill with the forge and the weapons he made, one of which he used to help Athena emerge from Zeus’ forehead when he swallowed her to protect her from Hera, as she was an illegitimate child he had with the nymph Metis.

Origin of Hephaestus, the Ugly God of the Forge

While it’s almost sure that Hephaestus was Hera’s son, it’s not always clear who his father was. Most likely it was Zeus. But there are some stories which state that Hera had him on her own without any male interference. And that was all because she wanted to get revenge on one of the many occasions when Zeus slept with someone else.

Hephaestus, despite his deformity, ended up being married to the Greek goddess of beauty and love, Aphrodite. Unfortunately, it was an unhappy marriage, and it produced no children. But that doesn’t mean he didn’t have other lovers. The lovers and children of Hephaestus included:

– Hephaestus and Aphrodite: Imperfection versus Perfection

So, the marriage between Aphrodite and Hephaestus was not an ideal one. Even though it seems like anyone would want the goddess of love as their wife, Hephaestus complained about her. He even offered to return her for the bride price. It had gotten so bad, and that’s the reason scholars give for the fact they had no children together.

Story of Hephaestus, the Greek God of Fire

Hephaestus took part in a few myths, but there aren’t many, even though he was an important god. His myths detailed his experience as a deformed god as well as his time with his lovers and family.

– Hephaestus’ Beginning: How Was Hephaestus Born? 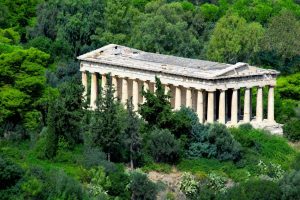 Hephaestus was kind of a tragic figure, and it all started with his beginning. The story of the birth of Hephaestus changed over time and was told through very many different mediums and storytellers. In most of the stories, it was Hera who threw Hephaestus off Mount Olympus when she saw how ugly he was. Some stories state that he was deformed before he was thrown, but others state that the fall deformed him.

In other stories, Zeus encouraged her to throw Hephaestus down because he wanted to keep his son from having sex with his mother. He fell, and his landing spot was the island of Lemnos. It became a healing place as well as a place of pilgrimage for the cult of Hephaestus. This was one of the stories where Hephaestus was made lame because of his fall.

In another story, Hephaestus was conceived around the same time as Athena, goddess of wisdom. Zeus, the central god, had an affair with a nymph named Metis, and together they had Athena. But he swallowed them to keep them safe from Hera’s wrath, but they pounded on Zeus’ insides to get out. At the same time, Hera conceived a child on her own because she was mad at Zeus, and that was Hephaestus, who forged an ax to burst Athena from Zeus’ head.

– Hera and Hephaestus: The God of Fire’s Anger at His Parents

However the story goes, Hephaestus was rejected by his own mother, and that caused a lot of problems. First of all, the fall from Olympus caused issues with his appearance and health and either caused his lameness or made it worse. This rejection also made him an angry, sort of vengeful god, and he was not happy. He sought out opportunities to get revenge if he could.

In one story, he used his skills as a blacksmith and metalworker to create a trap that would capture Hera. It was a chair, and when Hera sat down on it, it kept her in place. Every time she moved, it tightened even more. In some stories, the gods were furious and they sent Dionysus, the god of wine, to go get him drunk so that they could free Hera.

In other stories, Hephaestus said he would let his mother go if the god would give him Aphrodite as a wife. Zeus agreed, and so that’s how he married the most beautiful goddess. Hera was set free, but it didn’t make him any more popular amongst the gods. In the Dionysus story, he got Hephaestus so drunk that he could take him up the mountain for the gods to deal with him.

– The God of the Forge and Athena, His Aunt and Lover?

Athena and Hephaestus had connections because they were born around the same time. They where the protagonists of a couple of myths where they were tied together. However, it’s not clear which was the right story because things between them change depending on what myth you look at. They were seen as sort of counterpart gods because they both brought things to the Greeks.

Athena brought wisdom, inspiration, and creativity. Hephaestus brought physical skills such as crafting and building. Hephaestus might have been the reason for Athena’s freedom from Zeus’ body, and so Hephaestus thought he was owed something from her. In one tale, he fell in love with Athena and chased after her, wanting to sleep with her.

He caught up to her, and he was just about to ejaculate, but she got away from him. He was left to ejaculate into the ground, and that was how he impregnated Gaia, the mother goddess. In another story, he actually married her, but she was very reluctant to sleep with him afterward. She ran away, and he ejaculated onto the ground.

– Hephaestus and His Workshop: Blacksmith to the Gods

Hephaestus’ workshop was on Mount Olympus, but in other stories, it was at its base. In this workshop, he had 20 bellows, and he had many works. He also had a forge and an anvil, and his assistants included cyclops. He even created automatons who would help him in his workshop too.

He made various weapons, tools, and traps for the gods. Hephaestus’ weapons included:

Because their marriage was an unhappy one, Hephaestus and Aphrodite each had lovers. But that doesn’t mean Hephaestus didn’t mind that Aphrodite took other lovers. One of Aphrodite’s most famous lovers was Ares, the Greek god of war. When he found out about the affair, he decided to set a trap for the two lovers.

In his workshop, he made a sort of net out of a material that couldn’t be seen. Once it was completed, he put it on the bed where they would meet again. Once Aphrodite and Ares met once more, they were trapped inside of the net. While they were trapped, Hephaestus brought all the gods of Mount Olympus to come and view the gods in their amorous embrace.

It was the perfect way to use his skills to embarrass his wife and her lover. However, that didn’t help to improve their relationship.

Hephaestus created many automatons to help him in his workshop. But he also used these automatons to give out to others who wanted to use them. For example, he had an automaton named Talos to King Minos of Crete. Talos was used to circulate the island three times per day in search of pirates and other ill-intentioned people who wished to invade and plunder.

Hephaestus was even sometimes credited with creating Pandora, the first human woman. She was beautiful and alluring, and he even created the box or jar that she took with her. It was inside this box or jar that the gods put in all the possible evils of the world. As you know, Pandora’s curiosity led to her opening the box and letting out everything, except for hope.

What Is Hephaestus’ Symbol? Personality and More

Hephaestus is not a completely unknown figure. He was deformed, angry, and partly rejected by his family. However, he was one of the gods who returned to Mount Olympus even though he had been thrown from the top. His workshop was located there, and he was able to gain some ground with the other gods.

However, he was mostly seen as unloved and unwanted, and he was often an object of ridicule. He had lovers, friends, and was involved in myths, but he was generally hidden away from the main view. He was angry about the past, and he used his powers to get revenge for the pain he experienced. In addition, he was a figure for those who weren’t perfect or who were found lacking in some way.

He was usually pictured as an older man with a beard with some sort of tool in his hand. His main symbols are a hammer, an anvil, or tongs.

Hephaestus appeared in many pop media, and he was usually shown as the strong, bearded man with a tool. He appears in: 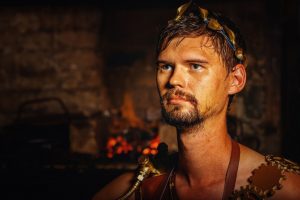 Take a look at the main points about Hephaestus covered in the article above.

Hephaestus was one of the main deities, and yet he was so different from everyone else. While all the other gods were beautiful and perfectly formed, he was imperfect and deformed. Despite his rough beginnings, he became the greatest craftsman of the gods and used his powers for both good and bad means. This god was a symbol of imperfection and the ways to overcome it in our lives.