Hestia: The Greek Goddess of the Home and Protector of Families

Hestia, goddess of the hearth and home, was the patron of all things to do with families and the household. There was always a fire lit for Hestia in her temples. She is one of the early deities, but she wasn’t always considered as a part of the  major gods of Olympus. Read to find out why Hestia is missing majorly from Greek myths.

Who Is Hestia in Greek Mythology?

Hestia is the goddess of the hearth and home in Greek mythology. Her Roman counterpart is Vesta, and they are essentially the same deity. In addition to hearth and home, she was the patron of families as well as their protector. Her realm was all that had to do with families and the household, similar to Hera.

She had a cult dedicated entirely to her, and there could only be priestesses. Men were not allowed in her temple. In her temples, there was a fire constantly burning, and it represented the constant presence of Hestia in the family life of Greek culture. She was one of the most important goddesses in Greek life.

She was the ultimate “matron goddess.” The worship of this deity was done mostly by mothers and women in general. To put out the fire of Hestia was to go against the moral code. Sadly, she doesn’t appear in many myths, so much of the information about her has been lost to time.

Etymology of Hestia, Translation of the Hearth Goddess

This is a direct translation because her name comes from the Greek word “hestia.” This word means either “altar, fireplace, or hearth.” So her name is perfectly apt for the goddess and her realm of control.

Origin of Hestia, the Protector of Greek Families

Hestia is one of the six children of the Titans Cronus and Rhea. She was originally the first-born daughter. But because of her angry father, who ate his children one by one, she eventually ended up being the youngest — in fact, she was the last one coming out of her father’s body when Zeus defeated him.

Myths About Hestia, Goddess of Family

Sadly, Hestia is absent from a lot of Greek mythology. So, we only know a little bit about who she was and what she represented, but that’s about it. One of the stories we know is her unique origin story.

– How Was Hestia Born?

Hestia was one of the children born of Titans. Since the Titan Cronus overthrew his father, Uranus, he was constantly worried that his own children would do so too. When his wife Rhea got pregnant, he decided that he would swallow his children as they each came out of the woman. Hestia was the firstborn, and so he swallowed her first.

The other children were Poseidon, Hades, Demeter, Hera and Zeus. Rhea wanted to save her children, so she decided on a plan. The final child was Zeus, and she took him to an island to keep him safe. When she returned home, she gave her husband a rock swaddled in baby clothes to swallow.

Zeus grew up on the island, and then he returned to avenge his siblings. He defeated his father and forced him to throw up all the children, and he did, making Hestia turn out to be the youngest. The children split up realms of the universe, and Hestia was given the hearth and home. But Hestia remained virginal, and so she never had children of her own.

What Is Hestia Known For?

We know a little bit about Hestia because of a few poems written by the famous Greek poet, Homer, who wrote “The Iliad” and “The Odyssey.”. It gives us only a little insight into Hestia’s attributes. He mentions Hestia twice in two separate poems.

In the second one, we can glean just how honored and respected she was among the people for her being in charge of the hearth and home. He writes:

“Hestia, in the high dwellings of all, both deathless gods and men who walk on earth, you have gained an everlasting abode and highest honor: glorious is your portion and your right. For without you mortals hold no banquet, where one does not duly pour sweet wine in offering to Hestia both first and last.”

– Was Hestia One of the Twelve? 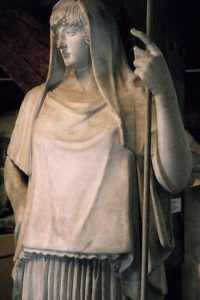 In Greek mythology, there were 12 main gods and goddesses in the pantheon. The eleven of them (plus Zeus), who are usually considered to be part of the group, are as follows:

Hestia and Dionysus both “compete” for a place in spot , and it changes depending on the records you look at. There is an engraving on the Greek Parthenon of the  gods, but it is Dionysus who takes up a spot there in this case. It could show that she was not part of the . But it could also be a portrayal of the fact that she was a modest god, who didn’t enjoy the “limelight.”

– Hestia and Her Greatest Asset: Her Prized Virginity

Hestia was not the only goddess who valued her virginity and protected it, but she was one of the more famous ones. Her sister Artemis was also a virgin goddess. After she and her siblings defeated the Titans for control of the universe, she started to be “courted” by Apollo. Or rather, he started making sexual advances, and she was not into it.

At the same time, Poseidon was also interested, but she, again, was not happy with that. Many people wonder about Hestia’s children, but she never had any because she had no interest in that or in being with a man. So, she asked her brother Zeus if he would help her. She told him that she wanted to remain a virgin goddess, and he allowed it.

He told her to come and live with him and take over his household. That’s why she controls the realm of the house and the hearth. And it’s the central aspect of the home, especially in Greek culture, where family is deemed as the focal point of civilization. After all, it is not by chance that all the deities form a large, complicated extended family!

In another situation, Hestia’s virginity was threatened again by a minor god named Priapus. This myth comes from one of Ovid’s tales. The Titans were defeated by Zeus for control of the universe, but not all Titans were on the Titans’ side. Once the Olympians won in the battle, Rhea, Hestia’s mother, held a party to celebrate their victory.

Hestia was not the partying type, and so she left the party for a little while to get a break from everything. While she was wandering, she decided to take a little rest, and she fell asleep in the woods. The god Priapus, who was also known as a fertility god and for his insatiable lust, was wandering along the woods, drunk. When he saw the sleeping Hestia, he was overcome with lust and decided to have his way with her.

But just before he got to her, a donkey brayed, waking Hestia up. She realized what Priapus was about to do, she alerted the other gods, and they came running. When they found out what Priapus wanted to do, they cursed him to lie with satyrs for the rest of his days. And Hestia’s virginity was saved.

What Is Hestia’s Symbol?

Hestia’s symbol was the hearth and the constantly burning flame. The fires of Hestia’s temple must always be lit. A fireplace or altar are other applicable symbols. Hestia represented many things about the Greek household and the woman’s place in it. Her choice of virginity could be representative of the culture’s desire for women’s purity.

And her lack of appearance in many myths could show her modesty as well. The culture of the Greeks at this time was very traditional and patriarchal, so these were the kinds of things expected of Greek women. Despite that, she was a very highly-revered goddess, and that was why her fires always remained lit. And it’s why she was often viewed as one of the  major gods.

The Worship of Hestia, Goddess of the Household

The role of worshipping the goddess fell to the woman of the household. The ritual of lighting the fires was sometimes followed by the sacrifice of an animal. The fire could not be extinguished, or it would be seen as a sort of sacrilege or a lack of care about the most important space of the home. Even though Hestia was a domestic-focused goddess, she represented the importance of fire and all that it would bring to a community.

Most rituals were handled by women, but the rituals that would take place at public offices would be taken over by a man. Unfortunately, there weren’t many temples dedicated to Hestia. But all hearths, whether private or public, were dedicated to this special goddess. There is mention of a temple to Hestia located in Olympia.

There are some sporadic mentions of other temples and/or public altars in her name. But, after all, she needed no public display of worship. She was always present in the life of Greek households, and the first sacrifice they made always went to her. So, in a sense, every single home was her temple.

Just like her myths, Hestia doesn’t appear in much pop media. However, she or her name appears in: 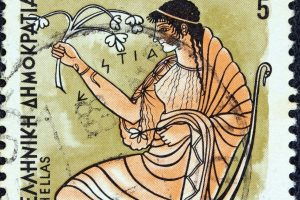 Take a look at the main points about Hestia covered in the article above.

Hestia might be seen as having a very limited scope in terms of power, but the hearth was everything. At that time, it was the central part of domestic life, and fire as a symbol meant power and strength as well. Her representation as a modest, virginal woman could have been to promote those traits in Greek women. But she showed her strength in the fact that she continually fought for her virginity, and she didn’t let anyone else tell her to be different.